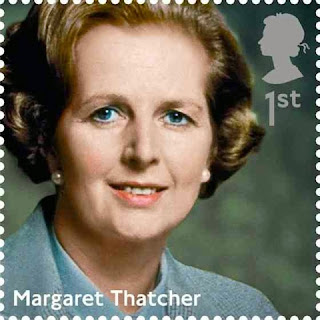 Royal Mail is said to have issued its new set of "Prime ministers" "postage" stamps on 14 October 2014 (the 948th anniversary of the Battle Of Hastings). The issue is clearly a thinly veiled way of commemorating the late Margaret Thatcher who died in 2013 and who was of course the first woman in history to become British head of government. The release of other stamps went some way to maintain a political balance as I have commented in a previous Blog. Lady Thatcher was loved by her supporters and loathed by her political foes but doubtlessly those who would place themselves in the first group would like the chance to use the stamp depicting her on their mail. I wish them luck in tracking down an example of the stamp.
I am currently on holiday with my dog in the West Country seaside town of Weston-super-Mare (population 76143 in 2011) and dodging in between the frequent showers I made my way to the town's post office to buy myself a set of the new stamps. The town's post office is a typical British post office of the present era - grossly understaffed and decorated in a depressing and unattractive way with nothing to look at in there apart from the large queue of potential customers snaking and trailing its way back in the direction of the door. There were 15 customers in front me waiting to be served and given that there were only 3 counter staff attending to the customers (although the post office has 7 counters) it did not surprise me that it took 16 minutes before I had reached the front of the queue.

The wait gave me a chance to observe what the rest of the long-suffering customers were doing in the post office - most of them were clutching forms in their hands for services to be carried out which had no relationship to sending mail. One woman took up about 10 to 15 minutes of a counter clerk's time by having numerous bags of coins weighed out to confirm the value of the coins she was paying into her bank account. Another woman had approximately 12 parcels to be weighed and entered into the postal service, all of them franked with Horizon labels. I saw no-one in the post office actually buy a  postage stamp or affix one to a letter.
So, 16 minutes having passed, I presented myself at the counter and asked for a set of the new Prime Ministers stamps. The counter clerk, who must have been exhausted, apologised politely about the wait involved to obtain my stamps and asked me if I wanted a presentation pack. I have long given up collecting these packs and said I should like to buy an ordinary set. The lady politely told me that this particular post office did not have any of the stamps for sale for use on postage - they were only obtainable if one paid the extra sum and bought a pack. As a large period of time in my life had been sacrificed in queuing for this new stamp issue I decided that for once I would pay the extra amount and buy a pack. I eventually emerged from this depressing little building into the rapidly fading late afternoon light.
So, if I had wanted to send a letter with a Margaret Thatcher stamp applied to it, I would have been thwarted unless I had been prepared to buy a complete set with the extra expense of a presentation pack. This conjures up in my mind the question of whether one can actually call these items "postage stamps" or if they are just collectables with a theoretical postal validity. After all, this was the main post office in a town with over 76000 residents and yet it was not possible to buy these stamps over the counter to use on a mail unless one was prepared to spend over £6 on a "collectable" item.
The thought did enter my mind that the lack of availability of the Baroness Thatcher stamp as a single item might have been a way of avoiding the difficult situation in which someone who continued to hold a grudge against her would be offered the stamp featuring her to use on their mail and as a result might have reacted angrlly to seeing their political bête noire being honoured by philatelic commemoration. It will be interesting to discover how freely available these stamps are elsewhere - I have my suspicions that they may be rather hard to track down in South Yorkshire, Northern England and Scotland.
Returning to thinking about Weston-super-Mare post office, at least one other question came to mind - given the appallingly long wait involved in being served at the counter to buy a postage stamp, why does not this large post office have any Post And Go machines for the quick dispensation of stamps for mail? We collectors have vast numbers of varieties of such items sold to us yet a sizeable post office with long queues of customers does not have a single Post And Go machine in use to improve the quality of service (another post office with which I am familiar - Stratford-upon-Avon [population 25,505 plus numerous tourists] - is in a similar situation).
The above points - no-one buying stamps for use on mail, lack of availability of commemorative stamps over the post office counter, absence of Post And Go machines in busy post offices - all add up to make a nonsense of modern philately - modern commemoratives in particular have no relevance to real postal usage and often are not even freely available to the mail-sending public and Post And Go labels are sold at stamp exhibitions but not in busy post offices where they may actually benefit the service to customers. Collectors of new issues need to think long and hard about what they are buying to add to their collections and whether they still are collecting postage stamps rather than expensive labels.
As regards the quality of service in many British post offices, one can not help but wonder what Margaret would say about it.