In 2012, rather improbably one might think, Isle Of Man was named as the world's fifth most likely nation to land a man on the moon with only USA, Russia, China and India ahead of it. This means that of all The Commonwealth's territories, Isle Of Man is preceded only by India in the likelihood of achieving this goal. This seemingly unlikely statistic is the result of the development of a space technology industry on the island which began as recently as 2001 (an appropriate year, you may feel).
I recently spoke to one of the island's residents, Howard Parkin, who has been an enthusiastic astronomer for 30 years and on more than one occasion has played an important role in persuading the Isle Of Man Post Office to issue stamps with an astronomical theme and to draw attention to the small island's important place in the space industry. Howard persuaded the Manx Post office to issue a set of 4 stamps on 1 September 2014 to commemorate the award of Dark Sky Discovery status to sites in the island which resulted in 4 splendid designs of nighttime views of different parts of the island with various constellations shining above them (see Blog 428). The set was designed by Isle Of Man Advertising and lithographed by BDT International Security Printers.
The release of the stamps was to have taken place in early 2015 to be linked to the solar eclipse which will occur on 20 March but had to be brought forward at relatively short notice when the postal administration found that it could not proceed with another issue. Perhaps the Isle Of Man Post Office will issue a special cover around the time of the eclipse to commemorate it and use stamps from this new stamp issue on the cover.
Howard told me that 2 of the depicted sites - those on the £1.64p and £2.30p - are not yet Dark Sky Discovery sites but the stamps still provide us with some attractive and atmospheric Isle Of Man views. One of the criteria for a site being given Dark Sky Discovery status is the ability to see the Milky Way (which in Manx is called Raad Mooar re Gorry - King Orry's Great Way) clearly on clear, dark moonless nights and Howard pointed out the depiction of the Milky Way on the £1.82p value to me.
Howard told me that each stamp in the set shows a scene from a different season - the 42p shows a winter sky as viewed from Niarbyl, the £1.64p depicts a spring sky viewed from Port Erin, the £1.82p shows a summer night sky viewed from Fort Island and the £2.30p represents the night sky over Langness:- 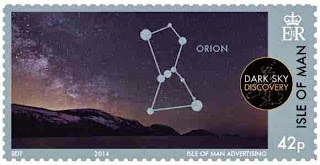 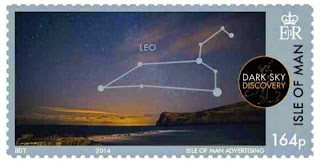 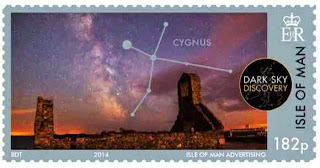 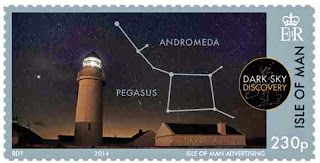 Kindly, Howard autographed my "Dark Skies" first day cover for me and that gave me opportunity to read the text which had been written by Howard for the filler card of the cover. The text mentions that the NASA astronaut, Nicole Stott, is married to a Manxman and quotes the contribution she made to support the Dark Skies application including a reference to her time in space "I tried on many occasions to identify The Isle Of Man from orbit, but I had great difficulty because it is so dark!..." 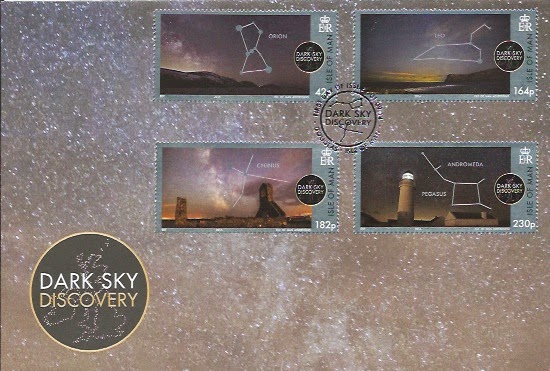 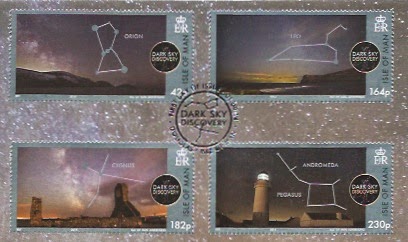 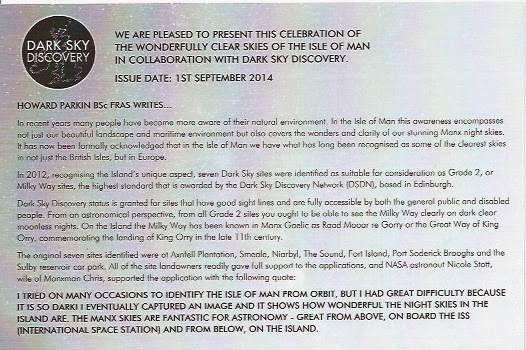 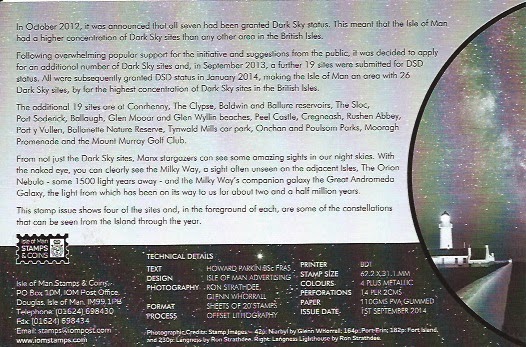 The obverse of the first day cover depicts the 2 photographers, Ron Strathdee and Glenn Whorrall,  whose work was used in the design of the stamps:-

Howard was first involved with Manx stamps when he suggested the subject of The Isle Of Man's Millennium issue which was released on 31 December 1999 and which depicted stars in the Manx skies at the 3 different times of 11.59PM on 31 December 1999, midnight on 31 December 1999 and 12.01 AM on 1 January 2000 thus marking the transition from one period of a 1000 years to another. The miniature sheet (depicted below) was undoubtedly one of the finest and most original of the many Millennium issues which numerous countries released at that time and the designs featured a peculiarly Manx spin on the subject with some wonderful sunset and sunrise views of the island. For collectors of the theme of astronomy on stamps both of the above Manx issues are a must and this applies to collectors of fine modern stamps in general. 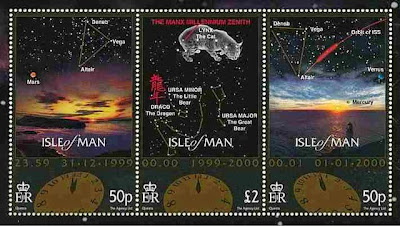 Having become involved with astronomy as an enthusiastic amateur over a quarter of a century ago Howard now lectures all over the world on the subject including a basic and informative review of the history of space exploration. Last year he visited several Pacific countries including the Commonwealth territories of Tonga, Samoa and New Zealand. Perhaps he should now add the subject of space as depicted on postage stamps to his repertoire of lectures. He certainly is a great enthusiast for the subject and has made a significant contribution to astrophilately with his promotion of the depiction of the theme on Manx stamps. His novel and original ideas have provided us with some of the most interesting and attractive Manx stamps of recent years.
Howard showed me a Manx Millennium cover signed by the famous astronomer and television celebrity, Sir Patrick Moore, which he had sent to Howard because of Howard's contribution and as shown in the photographs he is very proud of this item. The item is framed with a cover signed by the science fiction writer, Arthur C. Clarke:- 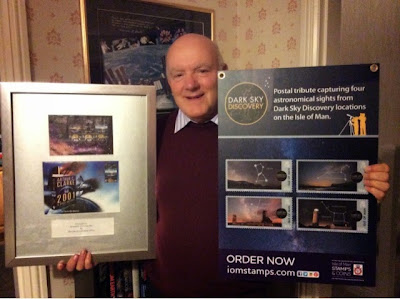 Although I frequently complain about what I see as excessive stamp issuing by the Manx Post Office I like the issues with which Howard has been involved because of their excellent designs, original approach and local relevance. I hope that it will not be too long before another astronomical subject comes along which Howard will feel is interesting enough to suggest to the Manx postal administration as a possible stamp issue.