There will be yet another issue from Jersey Post on 30 October 2014 - this time on the subject of Pirates and Privateering. The excellent art depicted on the 4 stamps and miniature sheet is by Mark Wilkinson and the issue was lithographed by Enschede. Jersey Post has already issued 10 sets of stamps during 2014 (as well as innumerable "Post And Go" stamps) and it is not clear why it was necessary to issue this particular set at this juncture but postal necessity has very little meaning in this era of philatelic incontinence:- 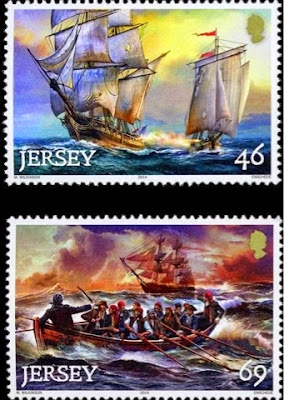 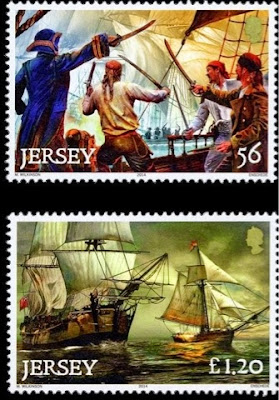 In Blog 439 I mentioned the excellent new set of 4 stamps issued by Botswana on 20 June 2014 on the subject of the "Lions Of Chobe". All 4 values are combined in a highly attractive miniature sheet which has also been issued with an additional inscription in the upper margin to commemorate the "Philakorea 2014 World Stamp Exhibition":- 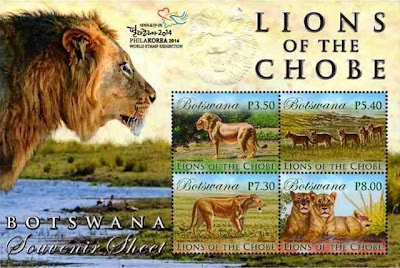 There has been a further issue of 4 stamps from Botswana to commemorate World Post Day. The set was issued on 1 October 2014. (See also Blog 449 and 456 for other Botswana issues).

Zambia has released another surcharged stamp during 2014 - this time it is the K4050 value of the 2010 3rd SAPOA/World Cup issue which has been surcharged K4.05:- 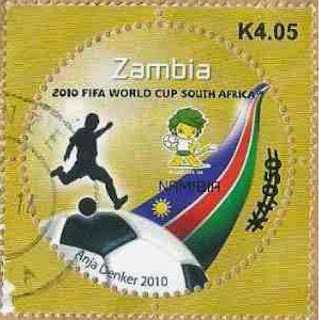 Kiribati has issued 2 stamps and 1 miniature sheet to commemorate its participation in the 20th Commonwealth Games which was held in Glasgow. This was the fifth Commonwealth Games in which the small state had participated and the first time the country had won a medal at the Games. The medal's winner, David Katoatau, actually won a gold medal in the men's weightlifting 105kg event and he is featured in the designs of the 25c and 75c stamps. The miniature sheet stamps depict the Kiribatian team marching into the stadium behind the Kiribati flag and the Games mascot, a Scottish terrier, participating in the Opening Ceremony (obviously Derek Miller, the designer of the stamps, is a dog enthusiast and could not resist incorporating the wee Scottie in his stamp design!)
Compare and contrast the wonderful and infrequent issues of Kiribati which are usually wholly relevant to the country (with the exception of the mid to late noughties when CASCO seemed keen to depict wholly irrelevant subjects included, bizarrely, polar explorers (!) - Kiribati is no longer a client state of that seemingly very tired agency and has not featured any such frippery for a while) with the issues of its neighbour Tuvalu which allows the IGPC to produce stamps with barely any or no relevance to it. Full marks to Kiribati. 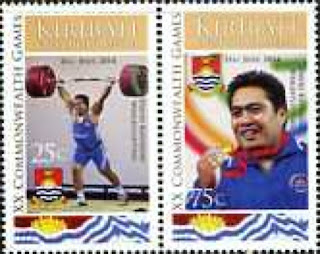 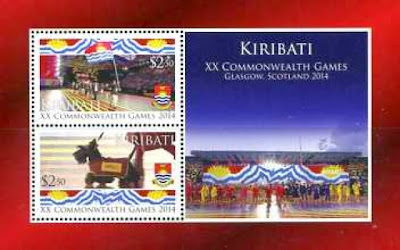