On 15 April 2014, Royal Mail will issue 6 stamps, 1 miniature sheet containing 4 different stamps, 1 retail booklet of 6 stamps and 1 prestige booklet containing 4 panes to commemorate the 300th anniversary of Buckingham Palace, previously known as Buckingham House. The set was lithographed by Cartor, the miniature sheet was lithographed by Enschede and the retail booklet was printed in photogravure by Walsall Security Printers. 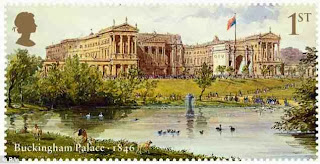 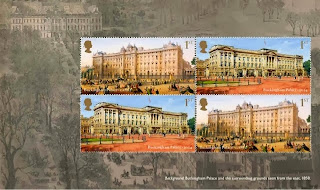 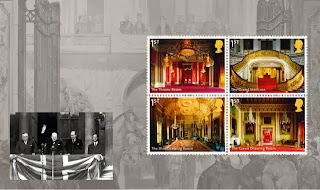 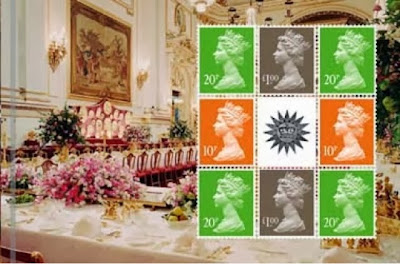 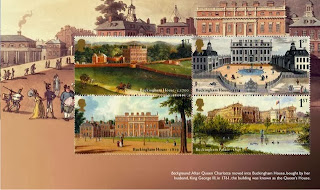 The face value of this issue, or should I say "Collection", (not including first day covers, presentation packs and postcards) is £19.80p but since the prestige booklet is sold at a price higher than the total face value of the stamps and there may also be an increase in postal rates before these items are released we may conclude that this single issue will cost the collector who wants "one of everything" a total of well over £20.
Royal Mail will also issue 6 stamps on 13 May 2014 on the subject of "Great British Films" released since the end of the Second World War. One of the stamps will depict the movie "A Matter Of Life And Death" which was released in 1948 and starred David Niven and Kim Hunter, both of whom are featured in the stamp design which shows them in an iconic scene from the film:- 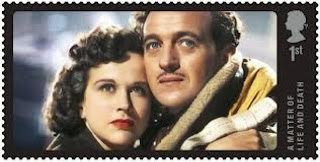 This is not the first time that David Niven has been depicted on a British stamp - his portrait was featured in one of the 5 stamps issued in 1985 which depicted British film actors and actresses:- 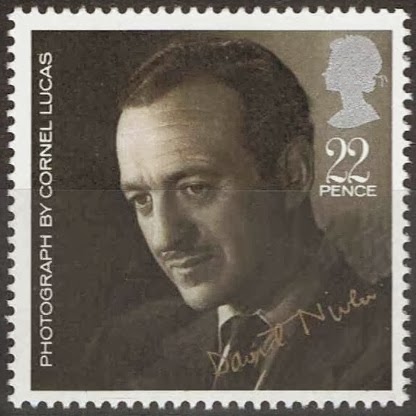 He has also been depicted on a stamp from Sierra Leone but then again, who hasn't?:- 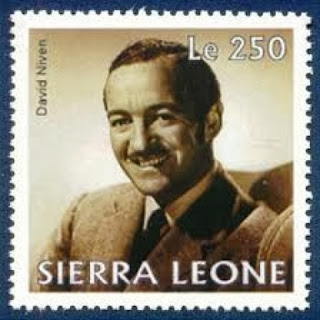 Royal Mail has also announced that it will issue 2 "Commemorative sheets" (philatelic items which contain £6 worth of stamps but are usually sold to collectors for £14.95) - one will be issued on 25 February 2014 to commemorate the 150th anniversary of Middlesex County Cricket Club and the second will be released on 25 March 2014 to commemorate the 350th anniversary of The Royal Marines.
According to my calculations, then, the cost from Royal Mail to "one of everything" collectors of all stamp issues (basic stamps, post and go stamps, miniature sheets, prestige booklets, retail booklets, "Generic sheets" and "Commemorative sheets") which will be released up to 21 April 2014 will be a whisker away from £100 at £99.25p not allowing for postal rate increases affecting face values of "1st" stamps and necessitating new definitive stamps. So, extrapolating the face value of items for the first quarter of 2014 to the whole of the year we may suggest that Royal  Mail will release at least £400 worth of new issues for collectors to buy during 2014. Co-incidentally that is about the same face value as the total cost of stamp issues produced by Philatelic Collector Inc. for the combination of Cook Islands, Samoa and Tonga in 2013 (see Blog 359) - planners of Royal Mail's stamp issues will no doubt be proud to be in the same category as the "Boutique Agency".
I've noticed that in its publicity about these stamp issues Royal Mail now tends to talk about an issue being "a collection" - for example - "The Buckingham Palace Collection" rather than a new stamp issue - in most cases a simple stamp issue is not adequate, rather it must be accompanied by additional booklets and/or miniature sheets and all the other usual accompanying paraphenalia. I made a similar point about the Manx Post Office's new issue publicity in Blog 361 and concluded that these postal administrations are just not interested in old fashioned collectors who buy postage stamps since it's probable that most of the profit comes from all the extra collectibles. Where will it all end? 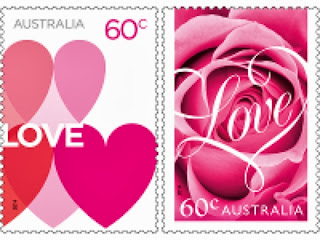 Meanwhile Australia Post keeps churning out the stamp issues with a release being due on 4 February 2014 on the subject of "Romance" for use in particular, I suppose, on St. Valentine's Day greetings cards. The issue consists of 2 gummed stamps and 2 self-adhesive stamps - 1 design only being sold in booklets of 10 stamps and the other being sold in booklets of 20 stamps meaning that if a stamp collector wants to obtain a single example of each self-adhesive stamp (face value $1.20c) from the Australian Post Office then he must buy a total of 30 stamps (face value $18 - 1500% more
than the face value of the stamps he wants to put in his collection!) To repeat myself, where will it all end?

Malta Post reissued its 37c Map of Malta "Occasions" stamp with attached label on 24 January 2014 with, I think, a "2013" imprint in the lower border (depicted above). The stamp was originally issued in this format on 17 March 2010.