The Jersey Post Office is to use a Hytech "Post And Go" machine at philatelic exhibitions so that visitors to the exhibitions can print "stamps" for themselves which depict the Jersey flag. Importantly while these publicly accessible machines will be sited at shows on mainland Britain - where the "stamps" are not valid for use on mail - no such machine will be available for public use in Jersey itself and so we must conclude that these are not true postage stamps but merely exhibition souvenirs. As such, I shall not feel any need to add them to my collection.
The first British exhibition where these souvenirs will be sold is Spring Stampex in London where they will be available on 19 February 2014. There will be 6 values - Local Letter (45p), UK Letter (55p), Europe (60p), Local Large (68p), International (80p) and UK Large (88p) totalling £3.96p. But collectors who feel they must buy these items won't get away with it that easily - oh no - because they are to be produced in two versions - one set from a machine for the exhibition visitors to print themselves (the "J" series) - and a second set - the "B" series - to be produced behind the counter and sold to the customers by counter staff. Hence the obsessionally completist Jersey collector will need to pay £7.92p for these initial items from Spring Stampex and I have a nasty feeling that there will be few more exhibitions where the Jersey Post And Go will make an appearance before 2014 is over.
As long as these items are not freely available from machines physically situated in Jersey itself, I can not think of them as true postage stamps and, like Jersey's infamous diamond-encrusted miniature sheet of 2012, I can not take them seriously even as "Footnote" issues. To me they are merely philatelic souvenirs which I can quite happily ignore and omit from my collection of postage stamps.
(See also Blog 334).
I now illustrate some of the previously mentioned recent issues from Sri Lanka.
1 December 2013 - Christmas - 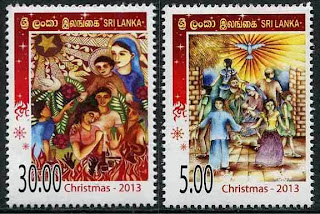 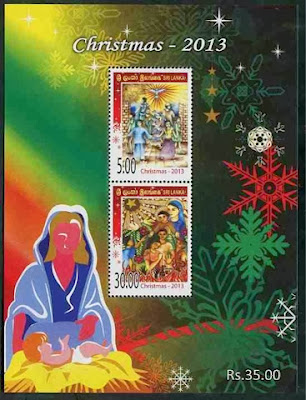 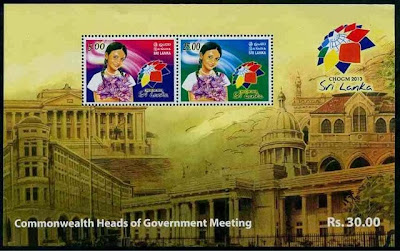 The Singapore Post Lunar new year set was issued on 3 January 2014 and consists of 3 gummed stamps, 1 self-adhesive stamp and 1 miniature sheet issued as a "Collector's Sheet". The stamps were designed by Leo Teck Chang and lithographed by Southern Colour Print and Cartor - 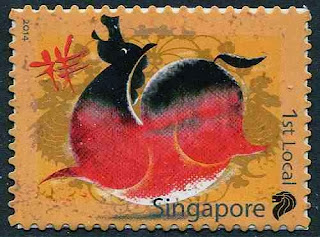 How unobservant I am - I had not noticed that the Johanna Benson commemorative issue from Namibia was sold for 2 postal rates - "Standard Mail" and "postcard rate", the latter being released with an attached label - 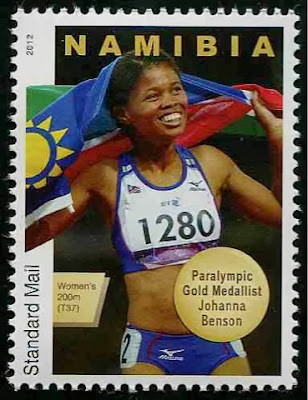 The new Nevis definitive set which I mentioned in Blog 348 was issued on 4 December 2013 and consists of 12 stamps which depict fish:- 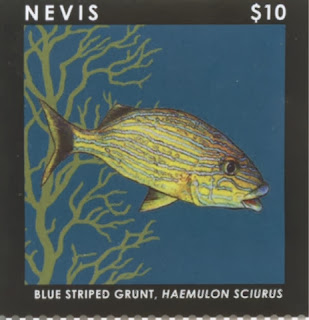 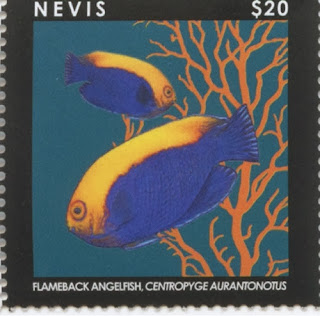 The second issue of 2014 from Australia Post depicts orchids and consists of 4 gummed stamps and 4 self-adhesive stamps produced in booklet format. The issue was released on 14 January 2013 and designed by Sonia Young and lithographed by EGO - 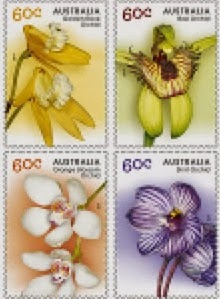 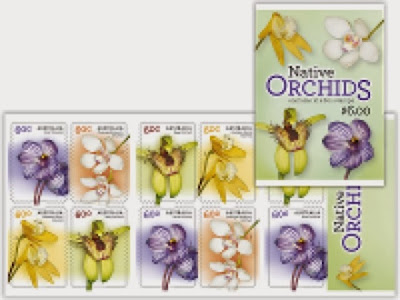 Isle Of Man's third issue of 2014 will be released on 19 February and will commemorate the centenary of the start of World War I and depicts British soldiers' lives in the trenches. A worthy issue because Manxmen fought along soldiers from the rest of The Empire but it is not clear to me why the date of issue was not delayed until later in the year which would have been nearer to the actual date of the outbreak of the terrible war. The stamps were designed by CASCO and printed in lithography:- 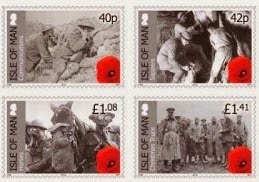 Following on from its set which commemorated the lunar new year, a subject of no relevance whatsoever to The Channel Islands, the Guernsey Post Office will issue a £3 miniature sheet on 12 February 2014 which features a subject which, yes, has no relevance to the island. The item consists of a charming portrait by Joel Kirk of a baby orang utan but it is a creature which is found in Sumatra and not Guernsey (and Guernsey is a very long way from Sumatra). The item was lithographed by Cartor. I guess that there are endangered species to be found in Guernsey which could be featured on the island's stamps but that they are not so appealing as a baby orang utan and probably would not sell so many stamps. 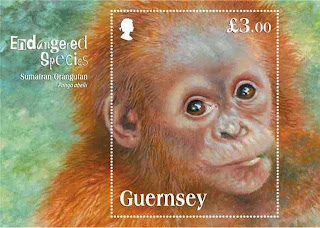 At last a 2014 issue from the Guernsey Post Office which is relevant to the island - a set of 6 stamps which features local ladybirds. This set will also be released on 12 February 2014 which is a little odd since there are not many ladybirds to be seen at that time of year - why not release them during the summertime? The stamps are nicely designed by Petula Stone and lithographed by BDT International. The stamps bear the additional inscription "Alderney". 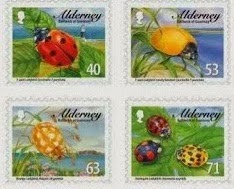