I have already complained about the omission of a set of stamps from the Royal Mail new issue programme to commemorate the 450th anniversary of the birth of William Shakespeare (Blog no. 326) (much better to issue a stamp which depicts "Peppa The Pig"). But another extremely important event in the history of The British Isles is also being ignored by Royal Mail - the 700th anniversary of the Battle Of Bannockburn which falls on 24 June 2014.
Presumably such an issue which would commemorate the victory of the Scottish forces of Robert The Bruce over the English which ensured the independence of Scotland as a separate kingdom would be exquisitly sensitive coming as it would just a few weeks before the holding of the referendum in Scotland where the people of Scotland will be given the opportunity to vote for independence from The United Kingdom. Royal Mail has never had the courage to commemorate historically important but politically sensitive events and people and the failure to release a "Battle of Bannockburn" issue is another example of this phenomenon.
Incidentally Royal Mail's commemorative issue for June 2014 will feature "Sustainable fish". O dear!
In an official British Virgin Islands Government report of 3 October 2013 about the ceremony to launch the BVI stamps which commemorated the 60th anniversary of the Coronation of Queen Elizabeth II, Postmaster Ms Pascha Stott commented that 3 sets of stamps - 2 commemoratives and the other set being a new definitive series - would be issued by the territory during 2014. Thereafter, she said, there would be at least two sets per year on themes relevant to BVI such as marine life, flora and fauna and the territory's "rich historical culture".

She acknowledged that philately "may appear to be on the decline" but felt that when it was connected to the territory's "rich history" it would become more appealing. It appears that stamp collectors are assured that BVI at least will continue with a pleasing and sensible new issue policy particularly because of the involvement of Pobjoy Stamps as the territory's philatelic agency. We look forward to seeing what the new definitive set and commemoratives will be like as this new year goes by.
I finally illustrate the set from another British dependent territory, British Indian Ocean Territory, which was recently released to commemorate the 60th anniversary of Queen Elizabeth's coronation:-

Several days after Christmas I received a very interesting item from Pitcairn Islands - a postcard wishing me Merry Christmas with a $1 "Landing Point" stamp attached to it and cancelled with a circular date stamp "PITCAIRN ISLANDS POST OFFICE" and dated 25 December 2013. This is a nice little item thanking me for my custom for the past 12 months and it is a much appreciated gesture. Well done, Pitcairn. Of course the item actually originates in the Pitcairn Philatelic Bureau which is actually situated in New Zealand and probably has never been in Pitcairn itself but in a way that makes it interesting in its own right. 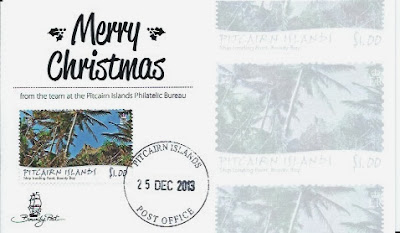