361. Manx Aviation Issue And Yet More Year Of The Horse Stamps. 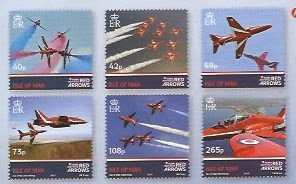 The Isle Of Man will issue 6 stamps on 19 February 2014 to commemorate the "50th display season of the Red Arrows" which appears to be an excuse to release a set at a price of £5.59 which depicts the popular theme of aircraft. This expensive set does not appear to have any direct relevance to the island and the Manx Post Office does not seem to have any particular special reason to issue such a set so this will be the first issue of The Isle Of Man which I shall not bother to buy for my collection. I will make it a "Footnote Issue".

The set was designed by Isle Of Man Advertising and lithographed by Lowe Martin.
Future Manx issues will be more locally relevant:-
4 April 2014 -150th Birth anniversary of Archibald Knox, early 20th century designer, who began his artistic career in The Isle Of Man;
15 April 2014 - "The Manx Ark" - preservation of rare farm animal breeds by the Rare Breeds Survival Trust - 1 miniature sheet of 6 stamps;
23 April 2014 - Millenium commemoration of the Battle of Clontarf in which the Irish of Munster defeated Vikings and Leinster Irish in the struggle for the control of the Irish Sea area. Vikings from The Isle Of Man took part in the battle.

The flood of Year Of The Horse stamps continues unassuaged. A sheetlet of 4 stamps and 1 miniature sheet containing 2 other different stamps has been released with the name of Antigua And Barbuda printed on them, though the date of issue is not yet known:-

The Antiguan Press reported the issue of the previously mentioned Nelson Mandela stamps during December 2013 but a reader commenting on one Antiguan newspaper website said that they had visited the post office in St. John's and been told by a clerk there that the Mandela issue would not be released at least until 10 January 2014 so any source reporting an earlier date of issue is inaccurate. The newspaper reports said that there were no official first day covers to accompany the issue.
The Grenada Year Of The Horse issue appears to consist of a sheetlet of 9 identical $1.50 stamps accompanied by an expensive $22 (£4.95p) single embroidered stamp. Doubtless there is someone somewhere who will feel the urge to buy such items:- 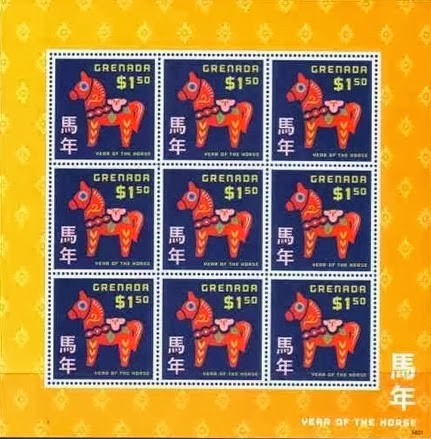 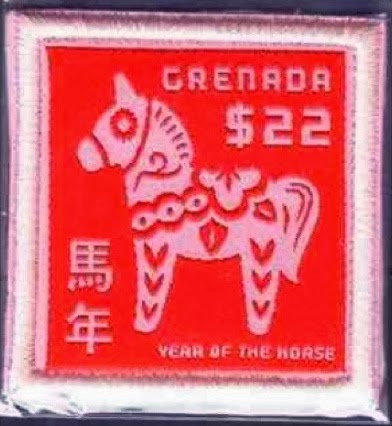 There is also an embroidered stamp on the market from Sierra Leone with a face value of Le34000 (£4.76p). Doubtless Chinese New Year is a big occasion in this West African country to justify such an extravagant issue or perhaps, on the other hand, it isn't! 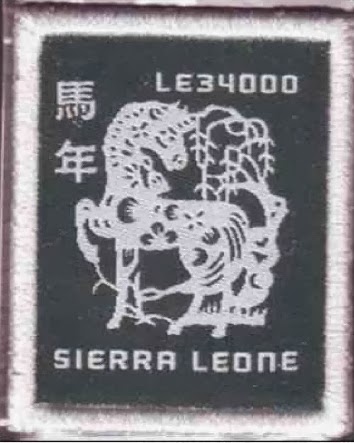 Turks And Caicos Islands, a British Overseas Territory in the Caribbean Sea (rather a long way from China, I think) has felt it acceptable to allow its philatelic agents to sell  on its behalf a sheetlet of 6  different stamps and an accompanying miniature sheet to commemorate the lunar new year. The stamp designs depict ancient glazed ceramic horse sculptures. Again, I do not yet know the date of issue:-


Finally, news from Nevis of a locally relevant stamp issue from late 2013. Three stamps and 1 miniature sheet were released which commemorate the 225th anniversary of the appointment of Alexander Hamilton, who had been born in Nevis, as the first Secretary Of The Treasury of The USA:- 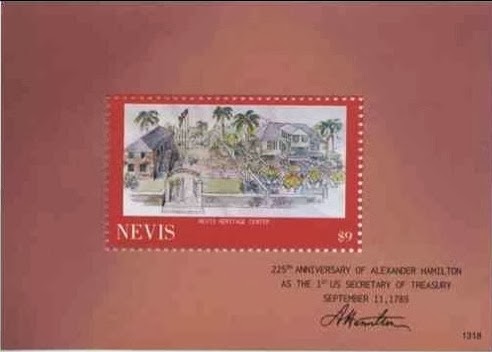 Nevis also issued 4 stamps to commemorate Christmas 2013. the designs depict paintings by the Italian artist Crivelli. I do not yet know the date of issue of the above Nevis sets:- 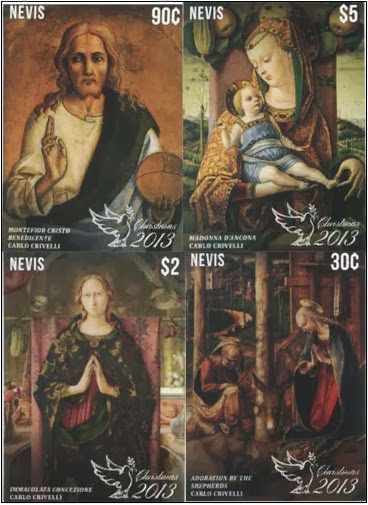