358. Birds And Monkeys Of Tanzania.

On 30 July 2012, Tanzania issued a set of 18 stamps on the subject of Birds of Tanzania. The stamps were lithograph printed by Oriental Press in Bahrain in a format of 3 sheetlets (1 of 8 different stamps and 2 of 4 different stamps) and 2 single stamp miniature sheets. This set has only just appeared on the market and is one of the locally relevant sets that sometimes appear from the Tanzania Post Office rather than being one of the issues emanating directly from its foreign philatelic agents:- 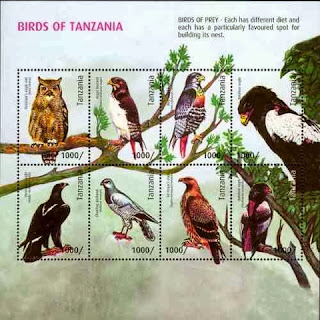 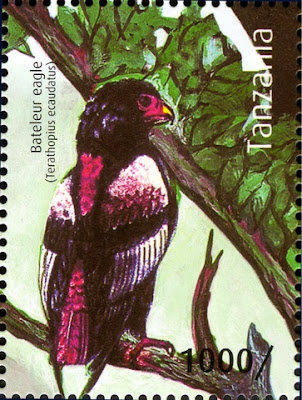 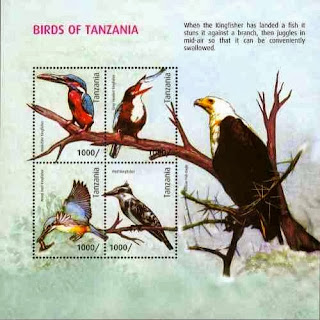 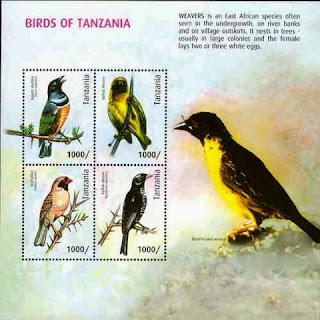 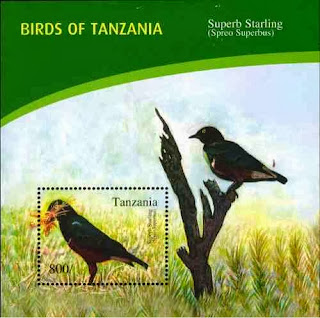 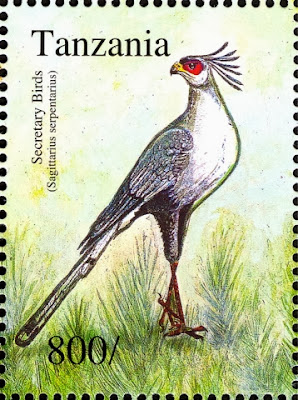 A second local issue was released on 15 October 2012 on the subject of colobus monkeys of Tanzania. The issue consisted of a sheetlet of 6 stamps with an accompanying single stamp miniature sheet (see also the blog of 18 July 2012):- 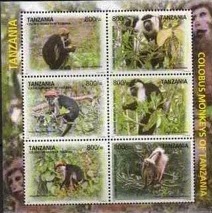 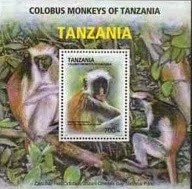 As previously mentioned, the British postal service, Royal Mail, will release 6 stamps on 4 February 2014 on the theme of "Working Horses" for no obvious reason apart from it being a potentially popular theme and possibly with some relationship to the Chinese New Year (The Year of The Horse) and the hope of large far-eastern sales of the set. At least, for once, we are spared an accompanying miniature sheet or booklets but the face value is still £5.52p which is not a modest sum. Of course, that is not the end of the matter since Royal Mail also released a "generic sheet" on  10 December 2013 to commemorate The Year Of The Horse and that is comprised of 20 x 1st class stamps with appropriately illustrated attached labels (the face value of that being £12 although the sale price is £12.50p). I long ago gave up collecting these generic sheets and do not regret their absence from my collection of British stamps at all. 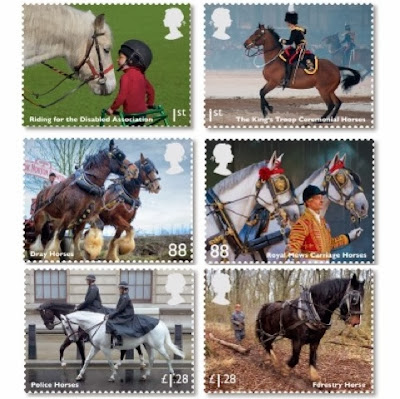 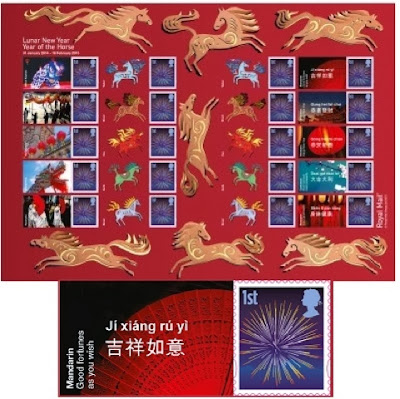 A similar generic sheet had been issued on  7 February 2013 to commemorate the Year Of The Snake so Royal Mail managed to squeeze 2 of these sheets for successive lunar new years into 2013. In all 5 generic sheets were issued by Royal Mail in 2013 (2 Lunar new years, 1 for Dr. Who and 2 for International Philatelic Exhibitions in Australia and Thailand - total cost to the collector being £62.50!) I wonder how well these items sell given their high cost and if the lunar new year issues sell particularly well in far eastern countries. 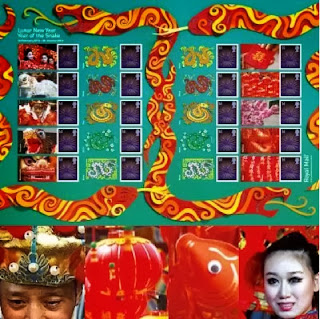 Philatelic Collector Inc. have just given details of their latest products which bear the names of Cook Islands, Tonga and Samoa. They have managed to pack a lot of philatelic items into the first few days of 2014.
An issue for Cook Islands was made on 3 January 2014 which was titled "Highland Paradise" and consisted of 9 stamps. I am not sure if the title of the issue is a mistake and should read "Island Paradise" or if the stamps depict life on higher ground in Cook Islands. The stamps were designed by the agency's favourite designer, Alison Ditko, and at least depict subjects of relevance to The Cook Islands and one can easily see them being used on mail sent by tourist visitors to the islands.
p.s. "Highland Paradise" is apparently a tourist attraction in The Cook Islands on one of the highest points of the territory hence the name. Perhaps it should be "Island Highland Paradise"(!)

Unfortunately, that was not the only set produced for Cook Islands in January. On 6 January 2014 another 12 definitives which feature insects were released as well as an accompanying sheetlet which contained all 12 designs. The designer of this issue was again Alison Ditko:- 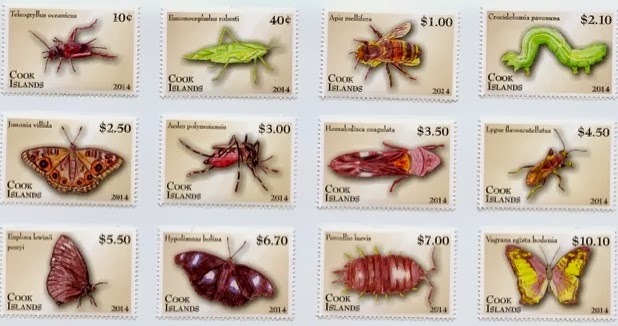 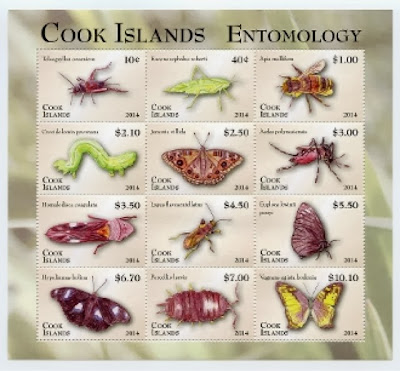 Of course there was also a "Year of The Horse" issue, this time a miniature sheet of 2 stamps which is said to have been released on 8 January 2014 and designed by the Chinese artist, Huang Li:- 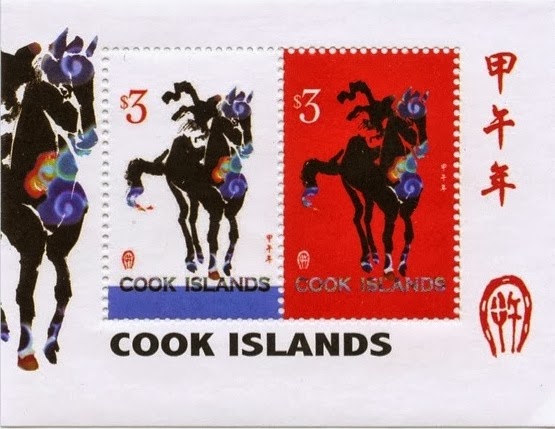 And philatelic agencies have not yet exhausted the profits-boosting potential of little Prince George of Cambridge who featured on a miniature sheet released on 14 January 2014 to commemorate his christening:- 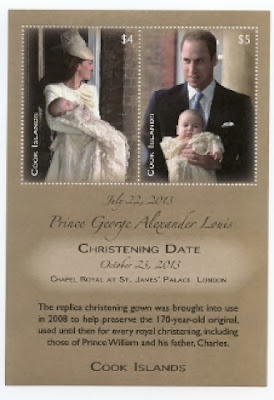 We are not yet done with Cook Islands since there is also the inevitable Year of The Horse issues to be mentioned which were produced with the inscriptions "Aitutaki Cook Islands" and "Penrhyn Northern Cook Islands" - one sheetlet from both, each consisting of 4 different stamps. These items were also designed by the ubiquitous Alison Ditko and the Aitutaki item is particularly irritating since only two of the stamps contained within it can be displayed correctly because the other two lie at right angles to them:- 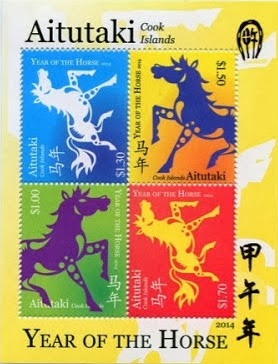 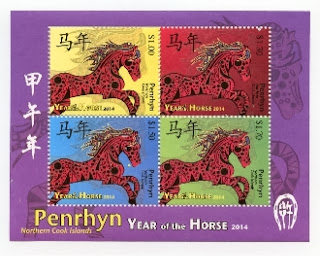 On to Samoa - a sheetlet of 6 different stamps was released on 8 January 2014 to, inevitably, commemorate "The Year of The Horse":- 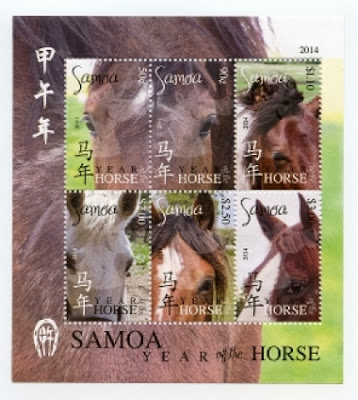 Then, on 10 January 2014, 12 more definitives which depict marine life were issued although, pleasingly, there was no accompanying sheetlet:- 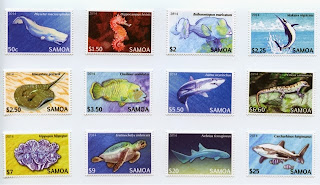 And so, to Tonga. Not too much of a surprise that there is yet another "Year of The Horse" issue from  Tonga - another sheetlet of 4 different stamps designed by, yes you guessed it, Alison Ditko and released on 6 January 2014:- 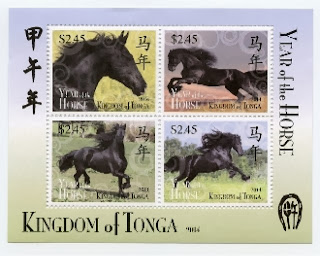 On 3 January 2014, a miniature sheet had also been released on behalf of Tonga which commemorated the christening of Prince George of Cambridge, even though the country has its own royal family which could be featured on its stamps:- 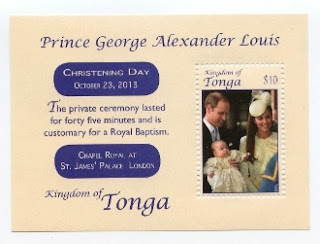 A third Tongan issue, inscribed "Niuafo'ou", was also released on 6 January 2014 and was yet another "Year of The Horse" production. The designer was Alison Ditko:- 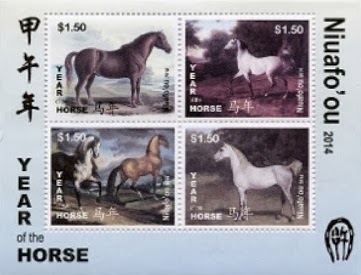 (See also Blog 332). p.s. See the upcoming Blog 359 for even more Tongan new issues.
Leaving the productions of Philatelic Collector Inc. behind us for now, I illustrate some recent issues of Eritrea, which of course is not a Commonwealth country but is one of those territories which at one time was administered by the British (though admittedly for a relatively short period) and which, because its stamps are so interesting, I still include in my collection. The country released 2 issues during 2013 - the first being a miniature sheet produced in The People's Republic Of China to commemorate the 20th anniversary of the establishment of diplomatic relations between China and Eritrea. Eight stamps were included in the miniature sheet - 4 depicted buildings and wildlife of Eritrea and the remainder depicted similar subjects in China. The stamps were designed by Ma Xiao Ling (see also Blog 301):- 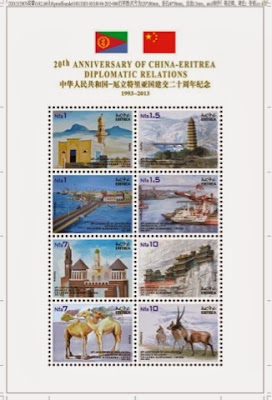 Eritrea issued 8 new definitive stamps on 27 June 2013 which depicted a previously used view of Ge'a'lo. The stamps were printed in lithography by Enschede:- 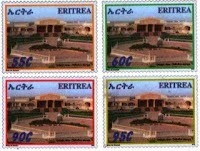 Prior to these issues, Eritrea had not issued any stamps since 3 September 2011 when it had released 2 stamps which commemorated the 50th anniversary of the armed struggle for independence against Ethiopia. The set was designed by Michael Adonai and lithographed by Enschede:- 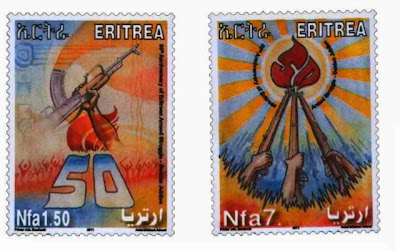 The same printer and designer were involved in the production of another set of 2 stamps which the Eritrea Post Office released on 17 June 2011 which commemorated the 20th anniversary of Eritrean Martyrs Day:- 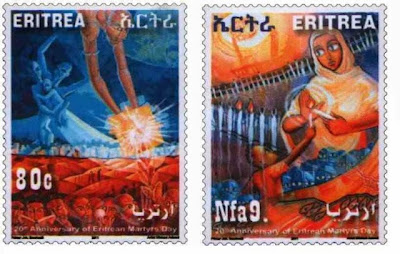 A set of 3 stamps was released on 23 May 2011 which commemorated the 20th anniversary of the achievement of Eritrean independence at the end of the long war of liberation against the Ethiopians. This set was also lithographed by Enschede but was designed by Behana Adonai:-

I think it is possible to see just how interesting the issues of this philatelically conservative country are and certainly they are much more interesting to me than an endless flood of "Year of The Horse" stamps, most of which have no relevance to the country whose name has been inscribed on the items.