Malta's second stamp issue of 2014 was released on 28 January and takes the form of a single stamp which is part of a joint issue with the Israeli Post Office. The stamp was designed by Ronen Goldberg. I am not sure why a joint issue  by the 2 countries was felt necessary but it follows on from last year's Maltese joint issue with the Caribbean island of Curaçao. For other 2014 Maltese new issues see Blog 351. 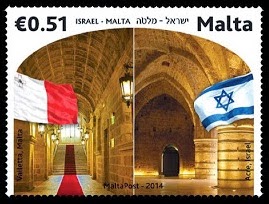 The Isle Of Man will issue a £3 miniature sheet on 19 February 2014 which will accompany its previously mentioned 6 stamp set which commemorates the centenary of the outbreak of The First World War. The miniature sheet is on the subject of art work carried out by troops in the trenches and was designed by EJC Design and lithographed by BDT International. It is an attractive and interesting item but does it really have to cost as much as £3?

The Isle Of Man Post Office has updated its website and put the emphasis on packs and philatelic items rather than straightforward stamp issues so that it is very difficult to find simple sets of new issues on the site without being offered expensive "collections" and "sheetlets" and countless other philatelic detritus. In this modern world it isn't enough to simply collect stamps but you have to have the stamps pushed at you in various forms of packaging, which add no real value to the stamps but greatly increase the price that you must pay for your stamps. From the point of view of the ordinary stamp collector who just wants to buy a set of a new issue from the island, the new website is awful. Then again, I suppose, the ordinary stamp collector who just wants to buy a simple set of stamps is of little interest to a post office or philatelic agent as the profits extracted from such a customer are minimal. The modern stamp business seems to be all about collectibles rather than stamps and ordinary stamp collectors are probably just a nuisance to such businesses. See also Blog 354.
Depicted below are some of the final issues of 2014 from Sri Lanka which I have previously mentioned but not illustrated:-
1 November 2013 - Dr. Premasiri Khamadasa (music composer) - 1 stamp;
30 October 2013 - Deshabandu Alec Robertson (writer) - 1 stamp:- 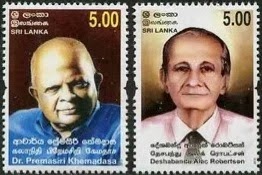 I believe the last 3 issues of the year from Sri Lanka were released in December and each consisted of a single stamp which commemorated
The Sri Lankan Administrative Service,
Ven. Baddegama Wimalawansa Nayaka Theor and
Dharmadasa Walpola.
I do not yet know the precise dates of issue of these 3 stamps.
The first Sri Lankan issue of 2014 commemorated the Thai Pongal Farmers Festival and consisted of 2 stamps and 1 miniature sheet which were released on 12 January 2014. See also Blog 354.

The stamp depicted below has a Maldives postmark dated 23 December 2013. I am not sure that I have seen this stamp before with its interesting currency inscription in "MVR" (Maldives Ruffiya) - usually the value is expressed as "Rf" - and I cannot find an image of it on the internet nor is anyone offering it for sale on the internet auction sites. I suspect that this is part of a set which Maldives Post was having prepared in  2012 (see the Blog of 29 April 2012) and that these stamps are what are actually being used on mail in the islands even though Stamperija released a large number of philatelic items in the latter part of 2013 including a sheetlet and miniature sheet which depicted "Turtles of the Indian Ocean". If anyone knows about this stamp I should be grateful for any information in the "comment" box especially if it is part of a previously unreported set.


I have previously mentioned the stamps released by Australia Post on 20 January 2014 to commemorate the Australian victory over England in The Ashes cricket test series match series. I now also depict the miniature sheet which accompanied the stamps. See also Blog 355.

The final issue of 2013 by India was released on 31 December and commemorated Babu Banarsi Das (1912 - 1985) who was a previous Speaker and Chief Minister of Uttar Pradesh. He was a promoter of the Co-operative movement and supporter of female education. For other recent new issues from India see Blogs 338 and 351. 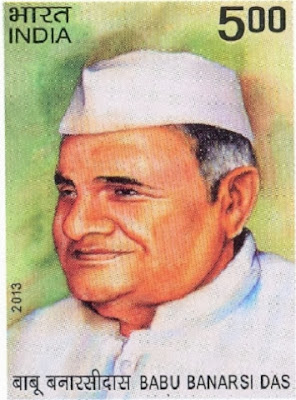