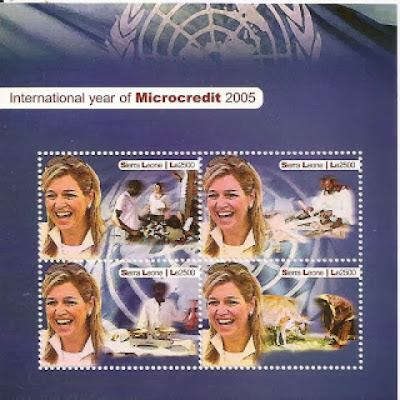 In the Blog of 18 January 2012 I mentioned that I had finally obtained, after some years of hunting for it, a miniature sheet which had been issued by the Sierra Leone Post Office to commemorate the International Year of Microcredit. It was said to have been issued on 20 October 2005 and all 4 stamps contained in the sheet depicted "the portrait of a woman at left", as Stanley Gibbons Catalogue describes it. For me too the woman's identity was a mystery and I wondered why she had been included in the designs which featured this particular subject.
I have just stumbled on a website of The Gambia Postal Services Corporation and discovered from it that they too issued a Microcredit issue in 2006 and included in it a commemoration of Princess Maxima of The Netherlands who, according to Wikipedia, apparently is the UN Secretary General's Special Advocate for Inclusive Finance for Development and was a member of the Advisor's Group for the International Year of Microcredit. The Princess became the Queen Of The Netherlands on 13 April 2013 when her husband, Willem Alexander, became King of that country.
So there's a philatelic mystery solved. It may also explain why I found it so difficult to obtain this issue - I wonder if the sheet's particular relevance to The Netherlands meant that it was marketed there and not promoted elsewhere. At least Gibbons Catalogue can now alter its description of the stamp and change "portrait of a woman" to "portrait of Queen Maxima of The Netherlands".
Incidentally a serious fire caused damage to Freetown General Post Office on 22 November 2013. The fire broke out in the General Manager's office while he was elsewhere at a meeting. Apparently many records were destroyed but fortunately no-one was injured. I have not found any report of the incident that suggests that there were any philatelic consequences of the fire.

A blogger, Sheku Sherif, writing about the fire describes how, soon after independence, the Post Office was one of the most efficient institutions in Sierra Leone but a wave of corruption swept the country in the late 1970's and early 1980's, when President Siaka Stevens was in power, and the Post Office was not immune from this and indeed many postal items were interfered with if they were thought to contain money or anything valuable.
He also mentions that the Freetown Fire Brigade were remarkably slow to respond to the fire.
Royal Mail will issue more philatelic items on 20 February 2014 when it releases a miniature sheet of 4 different stamps which depict railway locomotives from Wales. The sheet was lithographed by International Security Printers and is accompanied by a "Prestige Booklet" which will cost £13.97 and which has been lithographed by Enschede. The booklet will consist of 5 panes - 4 featuring the Wales locomotive stamps alongside previously issued stamps which depict locomotives of England, Scotland and Northern Ireland and the 5th pane consists of a mixture of Machin definitives (2 x 2p and 2 x 5p),  a Northern Ireland regional stamp and 3 flag stamps for England, Northern Ireland and Scotland.

But it doesn't end there. Also to be issued on 20 February 2014 is a £3.60p retail booklet consisting of 4 x 1st Machin definitive stamps and 2 of the 2013 footballer stamps, this time depicting footballers from Wales (John Charles) and Scotland (Dave Mackay).

But it does not end there. Due for issue on 19 February 2014 are the first "Post And Go" stamps of the year and the subject of the 6 new designs is "Spring blooms". The stamps were designed by Kate Stephens using art by Julie Trickey and printed in photogravure by International Security Printers. Of course, as usual, the collector does not have 6 stamps to buy but 18 of them since they are produced in the usual presentation pack format (cost £3.60p), digitally printed by Wincor Nixdorf machines in ordinary post offices and digitally printed by Hytech machines at the Spring Stampex philatelic exhibition (cost £6.42p each).

In addition there will be a further 12 Post And Go stamps on sale at Spring Stampex since the Union Jack and Machin designs will be sold from the Hytech machines there with added exhibition inscriptions applied to them. Are you keeping up with all this? I'm not sure I am.
It looks to me therefore that in the space of 2 days, Royal Mail will unleash 30 new Post And Go stamps (face value £29.28p), 2 booklets (total cost £17.57) and 1 miniature sheet (£3.96) on the unsuspecting collector meaning that if he or she wants to obtain just 1 unused example of each stamp and variant the cost to them will be £49.81p! (And that of course presumes that they will be buying the stamps at source and not having to obtain them from dealers whose costs and profit would have to be added to the total cost to the collector).

But that is still not the end of it! This is because even more Post And Go stamps will be issued on 19 February from the Hytech machines at the British Postal Museum and Archive when new overprints will be applied to both the Union Jack and Machin designs to commemorate the centenary of the first British Postage Due labels. Each design will be overprinted "The B.P.M.A./Postage Due 1914".
So, that means that the total face value of new Royal Mail stamps to be issued on 19 and 20 February 2014 will be £62.65p (hopefully I did my calculations correctly). All I can say is, good luck collectors of Great Britain, you'll need it (as well as an understanding bank manager).
New Zealand Post has announced that its second issue of 2014 will be released on 5 February 2014 on the subject of "Marine Biodiversity" depicting native seaweed. The stamps were designed by 2di4 and lithographed by Southern Colour Print. It is an interesting and attractive issue but  I question whether a miniature sheet was needed given that it adds very little to the set and that a miniature sheet had been issued with the previous month's issue which commemorated the Year of the Horse. I hope that New Zealand is not going to make it a norm that a miniature sheet is issued with every set:- 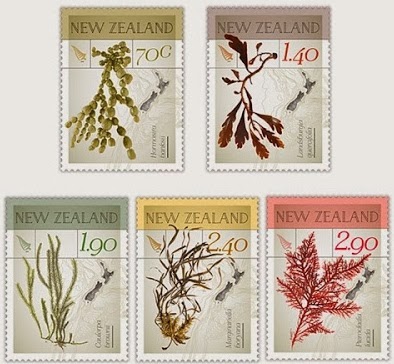 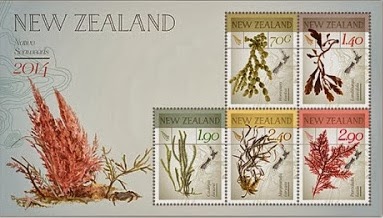