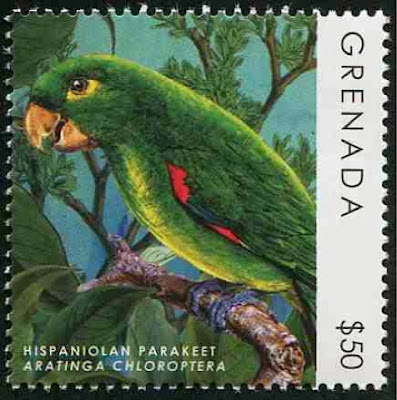 I have already complained about the latest definitive set to have been produced and issued on behalf of the Grenada Post Office because all the designs feature various species of parrots even though no parrots are actually to be found in the island (see Blog 322).Things are even worse because an expensive $50 value has been included in the issue and despite the price of the stamp, it again depicts a subject which has no relevance to Grenada - the parrot in question is not even to be found resident on one of Grenada's near-neighbours. Four species of parrot are found in The Windward Islands - Amazona Guildingii in St. Vincent, Amazona Versicola in Saint Lucia, and Amazona Imperialis and Amazona Arausiaca, both in Dominica. The parrot featured on the top value of the new definitive set however is the Hispaniolan Parakeet, Aratina Chloroptera, which has no connections either with The Windward Islands in general or Grenada in particular.
I wonder why this subject was chosen to be depicted on the new definitive set. Grenada is such a lovely island with so many interesting and attractive things there that it did not really need to feature foreign subjects on its definitive stamps - it's like India choosing to depict Arctic wildlife on its next definitive series. It's all very regrettable but not really surprising given that Grenada's philatelic agents which produced these stamps are the same agency which a couple of years ago produced stamps for Guyana which commemorated King Edward XIII and only recently provided stamps to Turks And Caicos Islands to celebrate the birth of Prince George Of Cambridge but chose to depict scenes from "Alice In Wonderland" on the stamps, failing to realise that that is the book where the only baby to appear in it turns into a piglet! (See Blog 340).
I'm interested to see that Canada has not included any stamps in its 2014 programme which commemorate the bicentenary of the War of 1812 in which Canadians and the British fought against an American invasion which sought to seize Canada and incorporate it in The United States, something which the Canadians were keen to avoid. Canada has released stamps to commemorate Canadian successes in the war in the past 2 years and featured heroes and heroines who resisted the American aggression so it's a little perplexing as to why there will be no further issue in 2014 (see Blog of 17 March 2012 and Blog 220). Interestingly, though, The USA has recently issued a stamp on the subject of the War of 1812 and this item commemorates the Battle of Lake Erie:-

The design by Greg Breeding features a painting by William Henry Powell dating to 1865 and was issued on 10 December 2013.
In 1812, at the outbreak of war, the British took control of Lake Erie but during 1813 the Americans built up a naval force there. The British blockaded the American base at Presque Isle but the American commander, William Hazard Perry, managed to extract the American ships and then blockaded the British base at Amherstburg where the British and their Native American allies soon ran out of supplies.
On the morning of 10 September 1813, the British ships appeared and battle began. Perry's Flagship, Lawrence, was pounded and rendered unusable with the loss of 80% of its crew and so Perry was forced to transfer his flag to the Niagara, rowing half a mile through heavy fire to get to the Niagara while the Lawrence surrendered. Perry's transfer to the Niagara is depicted in Powell's painting which is used for the stamp design. The fortunes of the two sides subsequently changed and the British force was defeated and forced to surrender. The Americans then controlled Lake Erie for the rest of the war and enabled American successes in the Niagara Peninsula in 1814 and removed the threat of a British invasion of Ohio, Pennsylvania and western New York.
On 25 March 2014, Royal Mail, the British postal service will release its fifth issue of the year (4 ordinary commemorative sets and 1 "Post And Go" set totalling 34 stamps, 1 miniature sheet plus at least 18 additional "Post And Go" varieties and 1 Prestige booklet and 1 retail booklet, all in the first 3 months of the year). This issue features "Remarkable Britons" of varying degrees of fame and worthiness who were all born in 1914.
Sir Alec Guiness, an actor of great distinction, is featured on one of the stamps. Although he played many great roles younger generations may only recognise him from his appearance in the "Star Wars" movie where he played Obi Wan Kenobi, a Jedi knight. As well as being a Jedi Knight he was also one of the great British theatrical knights and well deserves to be commemorated on a British stamp:- 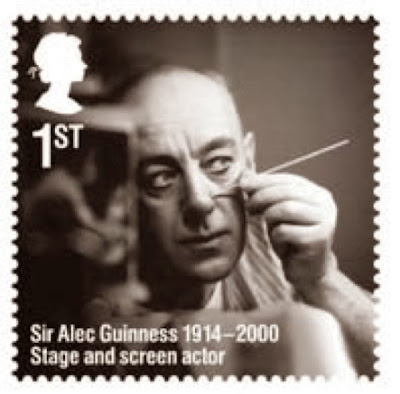 Other actors are also included in the set though they are not as distiguished as Sir Alec Guiness. Kenneth Moore was an altogether lighter actor and the actress Joan Littlewood also appears on one of the stamps:- 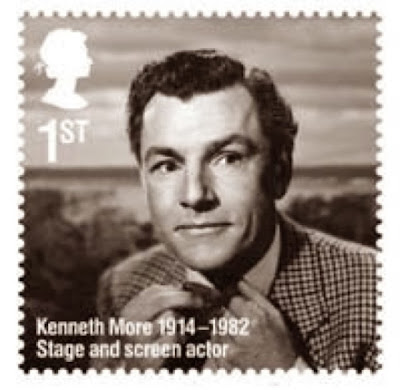 Another one of the more notable Britons to be featured in the set is the Welsh poet and playwright Dylan Thomas and the set also features the broadcaster Roy Plomley, the football manager and player Joe Mercer, the broadcaster Barbara Ward and Nobel Prize winning molecular biologist Max Perutz (a pleasing inclusion in the set given how rarely Royal Mail features eminent scientists on its stamps in comparison with personalities from entertainment and sport even though the scientists have made a much more valuable contribution to mankind than is made by kicking a ball around a football pitch).
Abram Games, a graphic designer, is featured on one of the stamps. He designed one of the British Olympic Games stamps (3d value) which were issued on 29 July 1948. 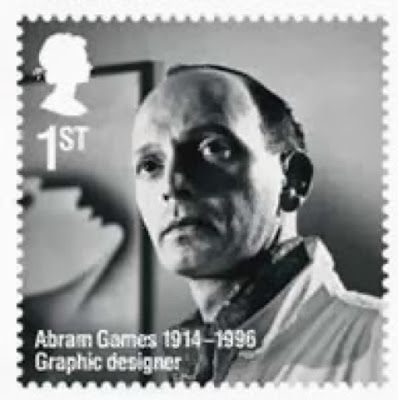 Games also designed stamps for Jersey in 1975.  The set of 4 stamps and miniature sheet which combined all 4 designs were issued on 6 June 1975 and depicted classic travel posters which Games had designed to promote tourism in Jersey:-

One of the most worthy subjects for commemoration in this set is the brave Noorunissa Inyat Khan. Shortly before the outbreak of the First World War, the family of Noorunissa Inayat Khan fled from Russia to London. Her father was Indian and a musician and teacher of Sufism while her mother was American. In 1920, the family moved to France where they lived until the Nazis overran the country at which point they fled back to Britain.
In November 1940 Noor joined the Women's Auxiliary Air Force but in early 1943 was recruited to the Special Operations Executive and during training adopted the name of "Nora Baker". She was sent to France in June 1943 and worked in Paris as a radio operator; highly dangerous work as the Nazis captured all the other wireless operators in her network but she turned down an opportunity to return to Britain. Her transmissions were the last vital communication links between Paris and England and she avoided capture by constantly moving around.
In October 1943 she was betrayed to the Germans by one of the French and arrested and underwent a month-long interrogation. The Germans discovered the records that she had kept and continued to send false messages to London resulting in the deaths of several British agents. In November 1943 she escaped with a fellow British prisoner but was recaptured and taken to Germany and placed in solitary confinement, being constantly handcuffed for 10 months. In September 1944 Noor was moved to Dachau Concentration Camp and executed by being shot in the head. A former Dachau prisoner later said that Noor had been brutally beaten prior to her execution. In 1949, she was awarded a posthumous George Cross and was also awarded the Croix De Guerre. A bronze bust of her was unveiled by The Princess Royal in Gordon Square Gardens, London in November 1912. 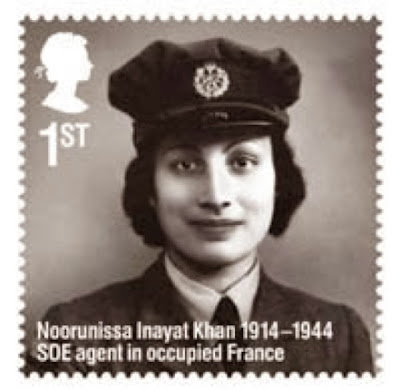 This set of stamps is printed in lithography by International Security Printers.
Finally, it is worth noting that today, 1 January 2014, is the 30th anniversary of the achievement of Independence of Brunei Darussalam from Great Britain. I have not yet seen any information about stamps to commemorate the country's important anniversary but I suspect some will soon appear possibly with a $30 miniature sheet since Brunei has issued a number of such sheets in recent years where the face value of the sheet matches the number of years commemorated. Let us hope that Brunei has no bicentenaries to commemorate in the near future.