Due for release by The British Virgin Islands on 30 January 2014 is an excellent set of 4 stamps and 1 miniature sheet which features the Antillean Crested Hummingbird as a World Wide Fund For Nature (WWF) issue. The designer of this set has produced a remarkably attractive 4 stamps which use clear, colourful, exquisitely detailed portraits of this little bird and which have perfectly positioned inscriptions and WWF logo and royal cameo. 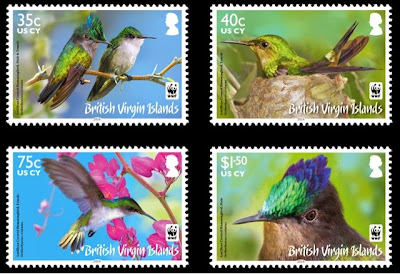 This set is a lesson to every other stamp producer on what new stamps should be like and we should not be surprised that British Virgin Islands uses Pobjoy Stamps to plan and market its issues with Creative Direction (Worldwide) Ltd which commissions the designers and printers of the stamps. There have been many excellent stamps originating from the stable of the Pobjoy-Creative Direction duo but I feel this new set from BVI appears to surpass their previous issues. It is a truly lovely set and the miniature sheet adds something extra to the set instead of just being an additional catchpenny item which is so often the case with miniature sheets nowadays. The set is excellent and without any of the gimmicks that are currently so common - no holograms, gold or silver foil, 3D, fragrance, special paper and so on - just straightforward excellent design using well chosen beautiful photographs. Issues like this prevent me from giving up stamp collecting. Well done everybody in the production of these stamps. And well done to Pobjoy Stamps for giving good advanced publicity to collectors about this issue (as they do with all their stamps) along with interesting and helpful information about the featured subject. Seeing this issue makes me feel very happy. 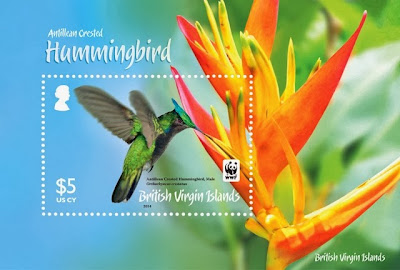 The set is produced in ordinary sheets of individual values and sheetlets of 16 which contain 4 se-tenant strips of 4 different stamps:- 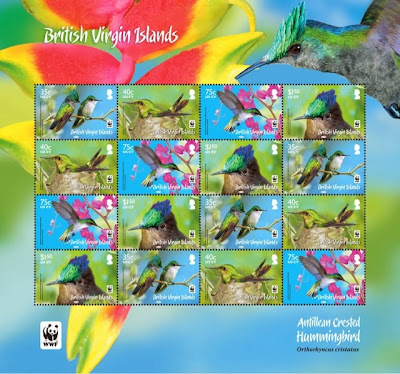 The final issues of 2013 from South Africa most notably include a "Prestige Booklet" which contains 12 different panes (which the South African Post Office refers to as "miniature sheets" in their  publicity about the issue) and which commemorates the 50th anniversary of the Rivonia Trial. The booklet was released on 26 November 2013. Each pane depicts one of the individuals (all of whom were members of the African National Council) who were accused under the 1962 Sabotage Act of committing sabotage and attempting to overthrow the South African government by violence. The accused people who are depicted on the 12 panes are:- Ahmed Kathrada, Andrew Mlangeni, Arthur Goldreich, Denis Goldberg, Elias Motsoaledi, Govan Mbeki, Harold Wolpe, James Kantor, Lionel Bernstein, Nelson Mandela, Raymond Mhlaba and Walter Sisulu.
The story of the trial is described in detail in the booklet and includes mention of the historic speech given by Nelson Mandela in his defence on 20 April 1964 which is one of the most significant speeches of South African history. All the accused were eventually found guilty by the court and they were sentenced to life imprisonment which led to Nelson Mandela's 18 years of incarceration on Robben Island near Capetown but eventually to his release to lead the newly democratic South Africa.
The cover of the booklet is depicted below:-

Example of the panes inside the booklet:- 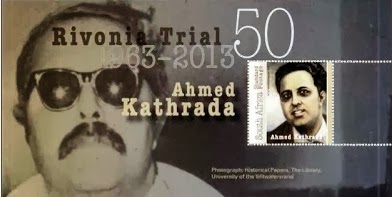 In view of his role as world statesman and Father of the Nation and his recent death, the most notable pane in the booklet is undoubtedly that which features Nelson Mandela:- The booklet was designed by Marie Vermeulen-Breedt and lithographed by Southern Colour Print. This current booklet is similar to that produced in 2003 which was titled "The Many Faces of Nelson Mandela". The booklet contained 10 different panes, each consisting of one stamp which illustrated different aspects of Mandela's life and also contained 2 postcards which depicted Mandela and had imprinted stamps on the reverse. 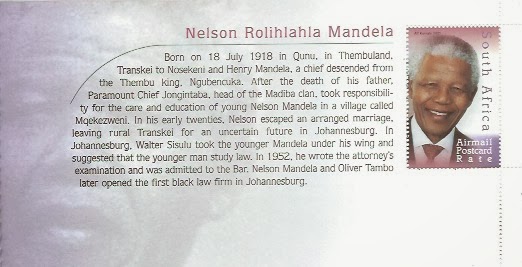 One pane in the booklet features Mandela's role as an ambassador for the new South Africa and depicts him with Queen Elizabeth II during his State Visit to Britain and is similar to the pane from the British "Prestige Booklet" which I mentioned in  Blog 350:- 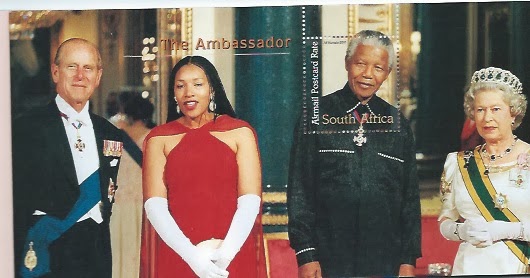 Pane 7 from the booklet shows a charming portrait of Nelson Mandela and other panes depict him with a gaggle of beauty queens and a champion boxer. Clearly this booklet is a key item in any collection of Nelson Mandela stamps and is of great interest to the general philatelist as well. 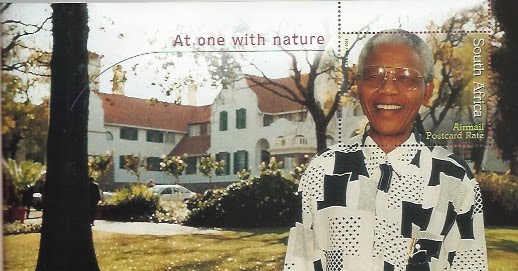 Back to 2013 - South Africa issued a booklet of 10 stamps (2 x 5 different designs) on 29 November 2013 to commemorate the 25th anniversary of World AIDS Day. The artwork is described as being by www.keiskamm.org and the stamps were lithographed by Southern Colour Print. 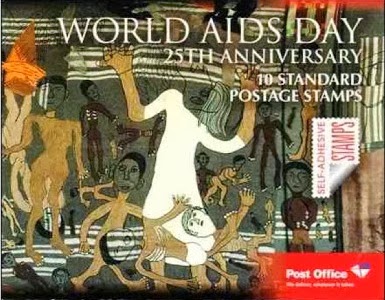 Two sheetlets each of 10 different stamps were issued on 12 December 2013 to commemorate the centenary of the Union Buildings in Pretoria. The stamps were designed by Anande Notling and lithographed by Enschede:-


Many of South Africa's stamps are interesting and very well designed and printed but some of the gimmicks used in a number of the designs are unnecessary and tiresome - the circular miniature sheet in which it was not possible to see all the stamps at any one time and which was issued on 20 March 2013 to commemorate the International Year of Water Co-operation was silly rather than innovative although someone somewhere must have thought that it was good idea. As I have already written above in this blog when discussing the Virgin Islands new issue, gimmicks are no substitute for good design.
The most worrying thing about South African stamps in 2013 however has been the number issued - 90 stamps and 17 miniature sheets (if you use the term which the South African Post Office has applied to the Rivonia Trial booklet panes). This is clearly an excessive number but at least the South African Post Office has not discovered "Post And Go" yet!