297. Big Cats Of The Isle Of Man And Jersey Cattle. 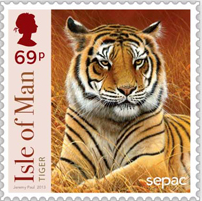 When you think about The Isle Of Man, large feline predators stalking the countryside are not topmost in one's thoughts. It's a little strange therefore to find the Isle Of Man Post Office issuing 6 stamps which depict some of the big cats of the world - about the largest animal predators you will find on the island are the appealing otters in the Wildlife Park. Nevertheless, complete lack of relevance of subject matter has never been a barrier to a desperate postal administration issuing a set of stamps to make money out of collectors and The Isle Of Man has the excuse that even if none of the cats are to be found on the island then at least the artist of these marvellous feline portraits, the excellent Jeremy Paul, is to be found resident on the island. This set of 6 stamps will be issued on 13 September 2013 and even if wholly irrelevant to this little island in the middle of the Irish Sea the stamps are certainly wonderful works of art and attractive items to collect. 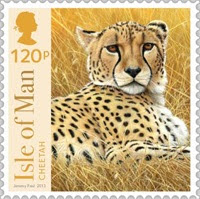 Not satisfied with the £5.92 that it will extract from the collectors who buy the set of 6 cat portraits, the Isle Of Man Post Office will also issue an accompanying miniature sheet with 4 more works of art by Jeremy Paul on the subject of a "Journey Through Africa". Again, The Isle Of Man isn't exactly famous for the great herds of wildlife that sweep majestically past one's hotel bedroom window in Douglas but this is a lovely item that is bound to be popular with collectors, especially of wildlife stamps but the cost of the sheet adds another £3 to the £5.92 price of the cats set. 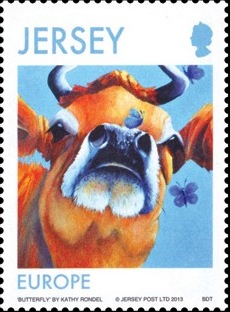 Jersey cows are to cattle what labrador puppies are to dogs - the most appealing of creatures. The Jersey Post Office has therefore come up with the idea of using portraits of Jersey cattle, beautifully painted by Kathy Roncel, to make up a set of 6 stamps which it will release on 20 September 2013. The stamps are lithograph printed by BDT International.
There is no doubt that both the Isle Of Man and Jersey sets are excellent issues which show marvellous animal portraits and even though the relevance of the Isle Of Man's issue is tenuous to say the least, both sets are highly collectible and will find a place in my collection. Perhaps next year Jeremy Paul should produce a miniature sheet titled "A Journey Through The Isle Of Man". 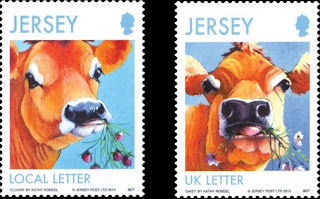 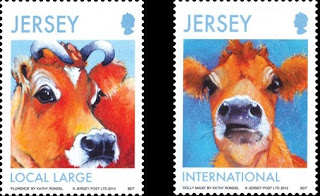 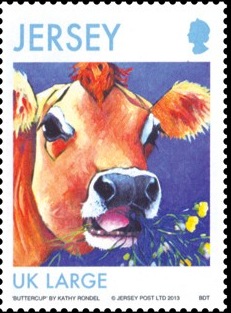