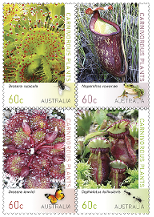 The latest rather luridly titled issue from Australia Post  - "Carnivorous plants" - was released on 13 August 2013. The issue of 4 different designs appeared in just 2 formats - gummed from ordinary sheets and self-adhesive from $6 booklets of 10 x 60c stamps.  The issue was designed by Jo Mure and lithographed by RA Print and McKellar Renown. A special feature of the stamps is said to be the rather ghoulish depiction in the sheet margins of the animals which are the prey of these rather sinister plants. The gummed set is shown above and 8 of the stamps from the booklet are depicted below:-

The CASCO philatelic agency has just 12 client territories now - Barbados, Belize, Bermuda, British Antarctic Territory, British Indian Ocean Territory, Cayman Islands, Jamaica, Mauritius, Nauru, St. Helena, Saint Lucia and Seychelles. There is a CASCO website which is supposed to inform potential customers of stamps from the client territories which they may wish to buy but it seems to be updated rarely (only 3 times so far this year) and therefore is not a very reliable instrument when it comes to obtaining information about new issues from these 12 countries.
Rather than the CASCO site being the first port of call for such information one has to trawl all over the internet to see if there is any news of issues from these territories. And indeed there is despite CASCO's reluctance to pass on such news (it's little wonder that a number of territories have given up being clients of the agency in recent years including those which have switched to Pobjoy Stamps which has an excellent website which gives detailed advanced news of forthcoming issues).
So, after some trawling, it appears that Saint Lucia issued 2 new sets of stamps on 8 April 2013. The first is comprised of 7 stamps (5c, 20c, 30c, 75c, $1, $1.50 and $2) and depicts dragonflies to demonstrate the subject of species diversity. The photographs were taken by Adams Toussaint and the design and lithographic printing were carried out by Cartor:- 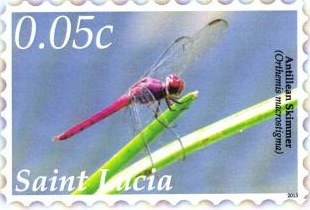 The second issue consists of 2 stamps - $5 and $10 - and depicts art by Llewellyn Xavier OBE on the subject "Splendor Of The Isle". This pair was also designed and lithographed by Cartor:- 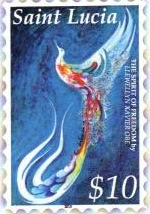 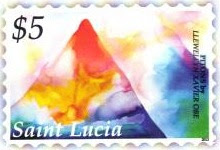 These 2 issues are the first stamps to have been released by Saint Lucia since 6 February 2012 when 6 stamps and 2 miniature sheets appeared which commemorated the Diamond Jubilee of Queen Elizabeth II.
Another CASCO territory which has recently issued its first stamps of 2013 is Cayman Islands which released a set of 5 gummed stamps and 1 self-adjesive stamp issued in booklet format on 9 August 2013 which is titled "Anchors". The set depicts underwater photographs by Lawson Wood of the anchors of local shipwrecks as well as outlines of the lost ships. An unusual and attractively produced set which has not yet been mentioned on the CASCO website:- 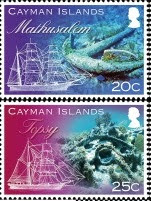 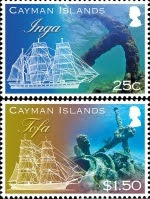 It has been difficult to track down a satisfactory illustration of the latest issue of 4 stamps from Bermuda (again, no mention of it yet on the CASCO site) which was issued on 18 July 2013. The set is the first part of a local folklore series and is on the subject of Gombay dancing. An excellent and modest set of local interest so, like all the sets mentioned above, I hope to obtain it for my collection.