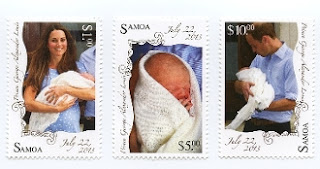 I have mentioned the stamps being issued by The Cook Islands and its subsidiary philatelic entities to commemorate the birth of Prince George of Cambridge in Blog 287 and now its philatelic agents, based in New York, have announced issues on the same subject from its two other client territories - Samoa and Tonga. From Samoa comes a surprisingly tasteful and attractive set of 3 stamps and 1 miniature sheet which actually depict the baby as well as his parents. We won't be too surprised to know however that the set is not cheap, including as it does, a $10 value or, if you buy the miniature sheet as well, two $10 values. 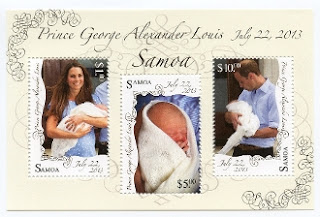 Samoa has also issued a sheetlet of 8 x $2.50 stamps (total face value $20) to commemorate its participation in the Pacific Mini Games which will be held in The Wallis And Futuna Islands from 2 to 12 September 2013:- 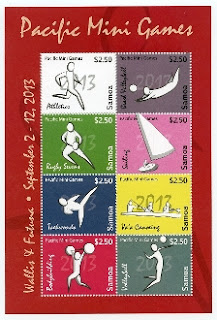 I do not yet know any of the dates of issue of the above Samoa stamps. From Tonga comes an issue of 3 stamps and 1 miniature sheet which feature a local tourist attraction - that of local cultural dancing:- 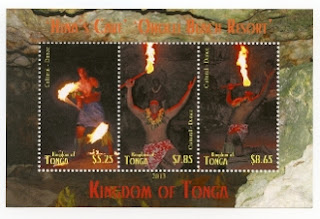 Although Tonga has its own royal family, such is the joy of the people of Tonga at the news of the birth of Prince George Of Cambridge, that its Post Office has felt the need to allow its philatelic agents to produce no fewer than 8 stamps and 2 miniature sheets so that Tongans (and especially Niuafo'ouans) can celebrate the happy event every time they mail a letter to someone. Having said that, the stamps are rather ambiguous about whose birth they are actually celebrating - the designs refer merely to a "Royal Baby" rather than mentioning Prince George by name and the illustrations on the stamps show neither the child nor his parents but different body parts especially distal parts of childrens' limbs. So I guess that the stamps could be reused when a Tongan Royal baby is born by simply overprinting the tiny inscription at the bottom of the design which congratulates the Duke and Duchess of Cambridge on their happy event and, for good measure, adding a $10 surcharge to each stamp to ensure even more healthy profits from the stamps. I do not yet know the date of issue of the stamps but there is a set and sheet for Tonga and a set and sheet inscribed "Niuafo'ou". 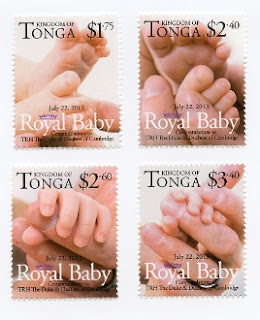 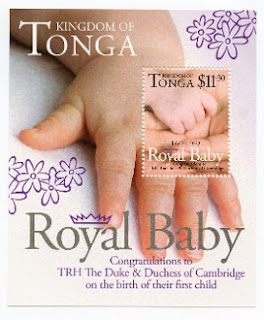 Also issued with the name of Niuafo'ou inscribed on them are 2 stamps which draw attention to the island's famous postal history as the "Tin Can Island:- 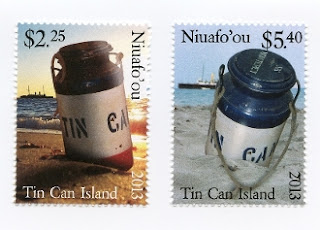 Depicted below is the Niuafo'ou Royal baby set and miniature sheet - most remarkable is the total face value of $31.05. Perhaps they are hoping to help to pay the child's future school fees at Eton:- 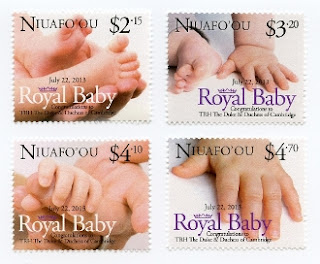 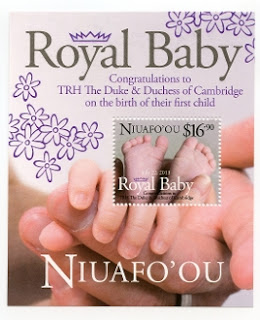