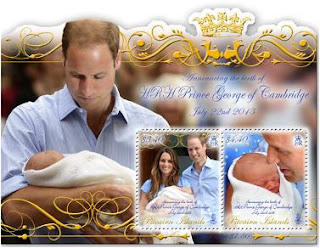 Pitcairn issued 1 miniature sheet on 16 August 2013 to commemorate the birth of Prince George of Cambridge. It was designed by Denise Durkin and lithographed by Southern Colour Print. The sheet contains 2 different stamps and is very appealing and attractive. Well done, Pitcairn.
Bangladesh released a number of issues on 30 July 2013 to coincide with the "Thailand 2013" Philatelic Exhibition. The issues included a wonderful set of 4 stamps produced as a se-tenant block which depicted tigers and promoted a tiger conservation campaign. The set was also combined in a miniature sheet. The designs were by Anowar Hossain and the printing was in lithography by The State  Printer in Gazipur (as were all the other issues mentioned below):- 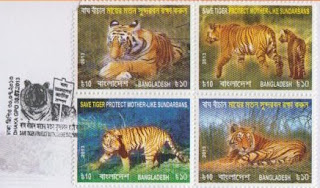 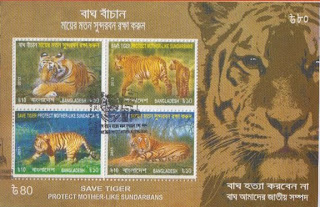 A miniature sheet was also issued on 30 July 2013 which was similar to the tiger conservation miniature sheet but had the flag of Bangladesh and the "Thailand 2013" logo added to the borders:- 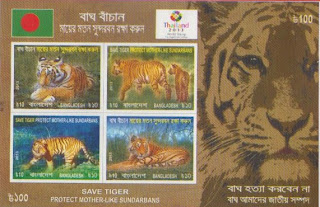 A miniature sheet was also issued which depicted critically endangered species of Bangladesh wildlife although there does not seem to have been a separate block of stamps from ordinary sheets released for this issue:- 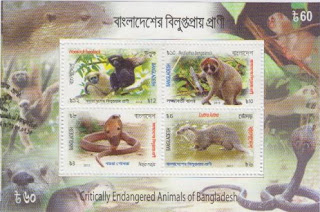 A similar miniature sheet was also issued with additional marginal inscriptions for "Thailand 2013" as with the tiger stamps:- 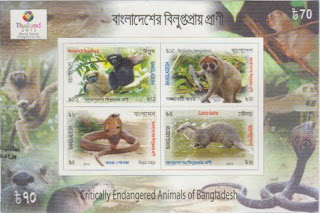 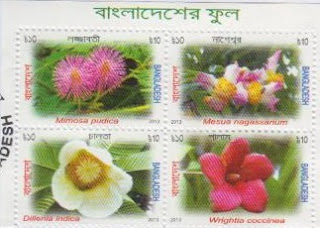 Also on 30 July, a se-tenant block of 4 stamps was issued which depicts Flowers of Bangladesh (shown above) as well as an accompanying miniature sheet which combines all 4 values. There does not seem to have been a second miniature sheet produced which had additional Exhibition inscriptions. 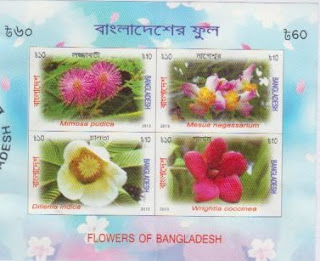 Again, on the same date, a single stamp and accompanying miniature sheet were issued to commemorate specifically the "Thailand 2013" Philatelic Ehibition". The design features a statue of Buddha and the miniature sheet includes the exhibition logo in the margins. All these stamps are very attractive and collectible. 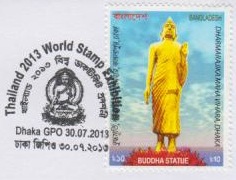 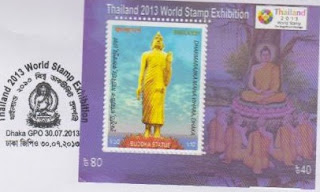