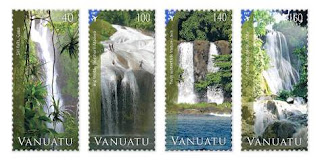 On 26 June 2013 Vanuatu issued a straightforward set of 4 stamps which depict impressive-looking waterfalls of the country. The set was designed by Denise Durkin and lithographed by Southern Colour Print (shown above).
The most recent issue from India is a single stamp which was released on 7 August 2013 to commemorate the Kerala Legislative Assembly:- 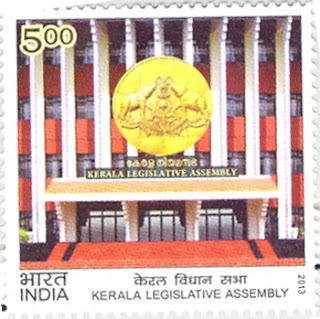 The latest issue from Zimbabwe appeared on 30 July 2013 and is a further installment in the ongoing series of "Heroes of Zimbabwe" issues. As with most of the previous issues, 4 stamps were included in the set in the values of 30c, 75c, 85c and $1:- 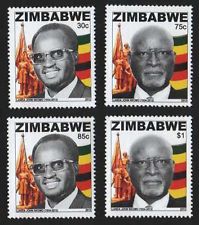 Next, to the most recent issues from Singapore:-
13 July 2013 - "Our City In A Garden" - 4 stamps and a "Collectors' Sheet" which were designed by Nicodemus Loh and printed in lithography by Cartor:- 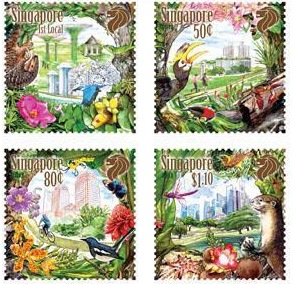 5 August 2013 - 50th anniversary of Independence (first of a series of 3 sets, 1 of each will be issued annually until the actual 50th anniversary of Singapore as an independent state in 2015). Singapore had been constituted as a separate British colony in 1946 after the end of World War 2 and achieved internal self-government as The State of Singapore on 1 June 1959. Great Britain actually granted independence to Singapore on 31 August 1963 but it joined The Federation of Malaysia on 16 September 1963 and remained part of that country until it declared its full independence as The Republic Of Singapore on 9 August 1965.  This set of stamps comprises 5 values, designed by Wong Wui Kong and lithographed by Secura, as well as a miniature sheet:-

23 August 2013 - "Singapore 2015" International Philatelic Exhibition (second issue) - 2 stamps and a linking label with an additional collectors' sheet. The items were designed by Willie Chan and lithographed (the sheet was also embossed and silk-screen printed) by Thai British Security Printers:- 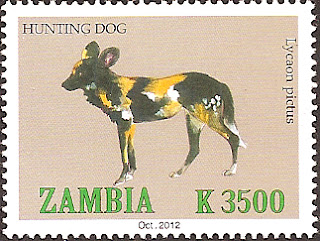 Now that I have obtained the set of 18 definitive stamps which were issued by Zambia in 2012 (I have still not been able to discover the exact date of issue) which I described in Blog 258, I illustrate a few of the designs here. Being a great dog enthusiast, I could not resist leading off with the Hunting Dog design which appears on one of the K3500 values and also of interest is a little sub-set of 4 stamps which feature various species of squirrels and which are clearly designed by the marvellous Mrs Gabriel Ellison who has designed many of the stamps of Zambia since the country achieved independence almost 50 years ago in 1964 and whose distinctive style has given the issues of the country a special character among Commonwealth stamps:- 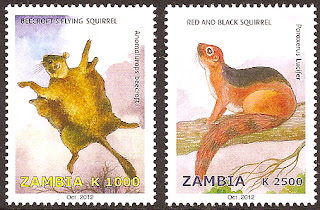 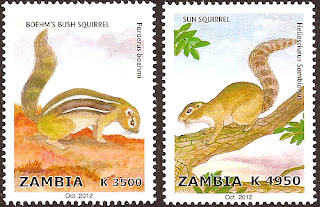 The other values in the set generally feature large rather than small mammals and some of the designs simply show the larger animals' heads, inadvertently and unfortunately making them look like the trophies of big game hunters rather than living and magnificent wildlife:- 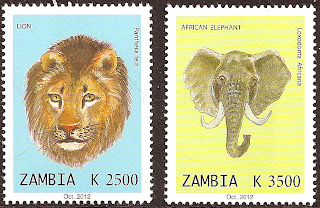 I have to admit, however, that I have a soft spot for the rather villainous-looking hyena which appears on one of the K4950 stamps:- 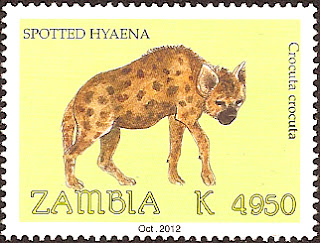 Zambia has also issued at least 3 new provisional surcharges in the revised currency which I  hope to be able to illustrate in the next few days - they have been produced by surcharging previously surcharged stamps. I also expect to illustrate a new surcharge from Botswana which has been produced by adding a 7 pula surcharge in front of the value of the 1997 30t bird definitive stamp to create a new P7.30 value stamp.
The latest issue from Montserrat also manages to feature elephants although the designs have nothing to do with the tiny Caribbean island. A sheetlet of 4 different stamps and a miniature sheet depict sites and scenes of Thailand, all of which are very colourful and attractive but do nothing to show a link between Montserrat and Thailand although the excuse for the issue is the commemoration of the "Thailand 2013" World Stamp Exhibition which was held in that country at the end of July 2013. I do not know the date of issue of these stamps but presume that it was 30 July 2013 to coincide with the dates of the exhibition:-