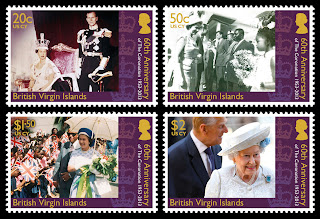 The first stamps to be issued by British Virgin Islands for two and half years will be released on 1 October 2013 to commemorate the 60th anniversary of the Coronation of Queen Elizabeth II. An excellent set of 4 stamps will be issued which depict The Queen and The Duke Of Edinburgh in coronation regalia (20c), the 2 previous visits of The Queen to The British Virgin Islands which took place in 1966 and 1977 (50c and $1.50) and a photograph of The Queen and Prince Philip which was taken at the service held at Westminster Abbey on 4 June 2013 to commemorate the 60th anniversary of the Coronation ($2).
The stamps were designed by Bee Design and lithographed by Cartor. Attractive and interesting photographs have been selected for use in the designs and the philatelic agents who now act on behalf of British Virgin Islands, Pobjoy Stamps, are promoting the issue to collectors well ahead of the release date so that collectors can see what will be on offer and hopefully decide to buy these stamps for their collection (not all philatelic agents seem to see that as their role). I shall certainly be adding this set to my collection of Commonwealth stamps and look forward to seeing what else will be appearing from The Virgin Islands in the coming months.
Another set to appear soon from the Pobjoy stables will be a set of 4 stamps from The Falkland Islands which will be the second of the series "Colours In Nature". To me this set represents perfection in modern stamp issues - an attractive, even beautiful, collection of designs of local relevance with sensible face values which represent the postal rates of the client territory ensuring the stamps of The Falkland Islands will continue to be collected by devoted philatelists. The set, designed by Ian J Strange and Georgina Strange and lithographed by BDT International, will be issued on 3 October 2013. Needless to say, a place on my album page is already booked for this excellent new set:- 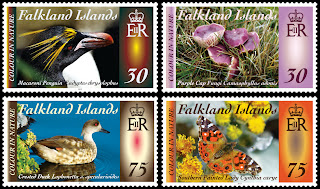 The above stamps are to new issue stamp collecting what "fine dining" is to eating!
Posted by White Knight at 04:31