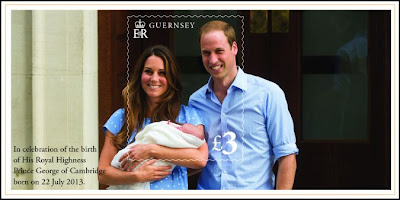 Among the latest Birth of Prince George issues is the £3 miniature sheet which will be released by Guernsey Post Office on 24 September 2013. The item was designed by Bridget Yabsley and lithograph printed by Lowe Martin.
Guernsey also issued a set of 6 stamps on 31 July 2013 which commemorated the bicentenary of The Guernsey Press And Star local newspaper. The stamps were designed by Charlotte Barnes and lithographed by Lowe Martin. 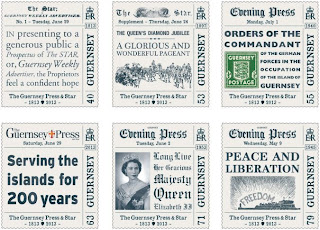 On 11 September 2013, a further 6 stamps will be issued to commemorate the centenary of The West Show and the issue will include Guernsey's participation in the 2013 SEPAC issues. The stamps were designed by Joel Kirk and again the issue was printed in lithography by Lowe Martin:- 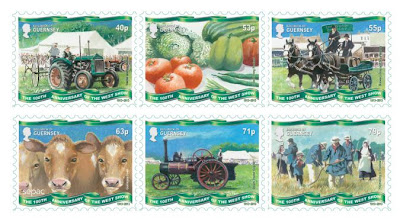 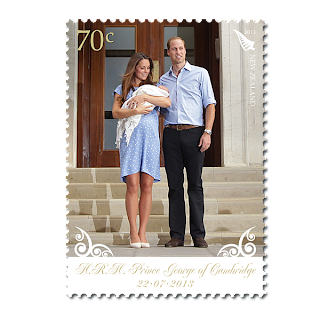 Meanwhile, New Zealand Post has announced that it will issue 4 stamps on 11 September 2013 to commemorate the the birth of Prince George, who is third in line to the throne of New Zealand. These are straightforward photographic designs from the scenes on the steps of the hospital in which the baby was born and which have now become very familiar on stamp designs but they are particularly attractive and appealing designs, especially the $2.90 value which depicts a charming photograph of the Duchess Of Cambridge holding her baby son in which the expression on her face is both serene and full of happiness. The stamps were designed by New Zealand Post and printing was by lithography carried out by Southern Colour Print:- 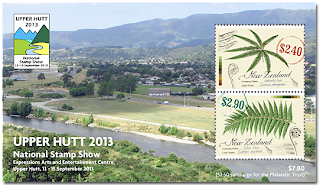 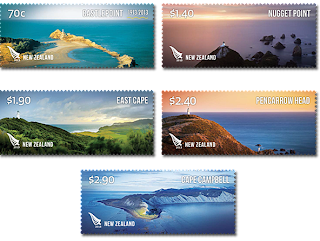 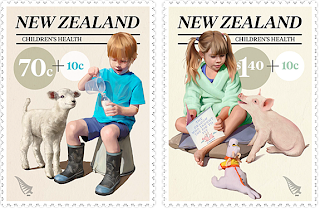 and also on 4 September 2013, 2 gummed stamps (shown above) and 1 self-adhesive stamp from coils and 1 miniature sheet which combines all 3 designs in the annual Children's Health series, this year on the theme of children's pets. These are wonderful designs comprised of charming artwork by Stephen Fuller and printed in lithography by Southern Colour Print. 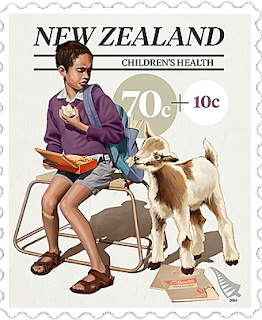 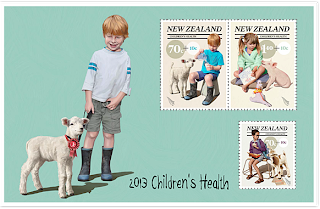 The quality of the design of the above stamps contrasts strongly with that apparent in the random selection of photographs combined in 3 sheetlets being issued by The Cook Islands (date of issue not yet known) to cash in on the commemoration of the birth of Prince George.

As shown below, an issue is not just being made in the name of The Cook Islands but also for 2 of the islands in the group - Aitutaki and Penrhyn. In all, therefore, Cook Islands has so far issued 15 stamps to commemorate the Prince's birth but, strangely, none of the designs show a picture of the Prince. Presumably a second issue will be made to enable Cook Islands' philatelic agents to rake in more money by producing stamps which depict the royal baby himself:-

Leaving the subject of Prince George, a set of 3 stamps (90c and 2 se-tenant 60c) and a miniature sheet were issued on 17 July 2013 to commemorate the bicentenary of the Port of Cork by The Republic Of Ireland:-

Finally, Malawi has recently issued (I do not yet know the actual date of issue) a set of 5 stamps which depict local dancing:-