284. Gibraltar Royal Baby Issue And Issues From Other Dependencies. 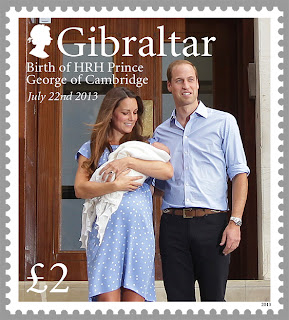 The Gibraltar Post Office has announced that it will issue a single £2 stamp on 16 August 2013 to commemorate the birth of Prince George of Cambridge. The stamp will be issued in a sheetlet of 6 as depicted below. The issue is designed by Stephen Perera and lithographed by BDT International. Unlike the Isle Of Man Post Office (see Blog 280), Gibraltar waited patiently for a few days so that the newly born prince could be included in the stamp design along with his parents who are shown standing proudly on the steps of the hospital where the birth had taken place. A similar picture of the parents, with baby in arms, was also used on the issue from Australia Post (see Blog 281).
Rather surprisingly a Royal Mail spokesman suggested recently on the internet that the British postal service would not be issuing a Royal Baby set of stamps. Given that the organisation has flooded the new issue stamp market in the past couple of years with issues commemorating a huge range of subjects, this news is rather surprising since it is likely that such an issue would be very popular with the general public in Britain. Then again, those that try to work out ways of making financial profits from marketing stamps could easily have a change of heart - let me guess - "the weight of public pressure forced them to issue a set after all".
Actually, I'm quite in favour of modest stamp issues to commemorate the royal birth such as the Gibraltar  and Australia stamps. For Gibraltar the issue of course has great significance since it not only depicts a cameo of its current (British - not Spanish) monarch but also portraits of 2 of its future (British - not Spanish) kings at a time when Spain is putting strong political pressure on the territory over which it claims sovereignty. This illustrates that stamps not only have a role as receipts for the pre-payment of postage and as a way of making additional financial income for a postal administration/philatelic agency but also can be powerful, if small-sized, instruments of political propaganda. 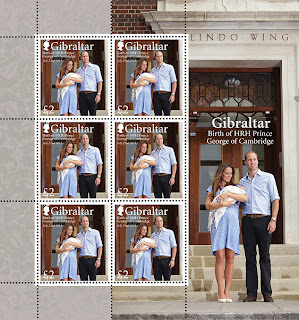 In Blog 279 I wondered what had happened to new stamp issues from British Virgin Islands since its change of philatelic agent from CASCO to Pobjoy Stamps. Mr. John Smith of Pobjoy Stamps kindly contacted me to let me know that it is hoped that a couple of issues will soon be released for the territory which I feel will be very welcome especially as we have not seen any new stamps from BVI since April 2011. It appears that there are not any plans to "rush out" Royal Baby issues which, I think, reflects Pobjoy Stamps' excellent determination that their client territories can not be accused of excessive issues or of taking advantage of stamp collectors although, just this once, I will forgive them if such issues are released since the photographs of The Duke and Duchess of Cambridge with their new son are very charming and make for excellent stamps as shown by the Australia and Gibraltar issues.
Meanwhile, another British dependency - Montserrat - has released 2 new sets of stamps. A sheetlet of 4 different stamps and 1 miniature sheet has been released (I do not yet know the date of issue) which commemorates the 40th anniversary of CARICOM, the Caribbean Community. The designs are abstract in nature and have little that suggests that a country from the beautiful Caribbean area has released them but I suppose that they are relevant to Montserrat since it is a member of CARICOM. I suppose that the dominant blue of the design and the unconvincing waves incorporated in the design are an attempt to conjure up the idea of The Caribbean. 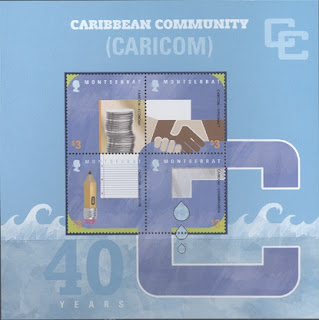 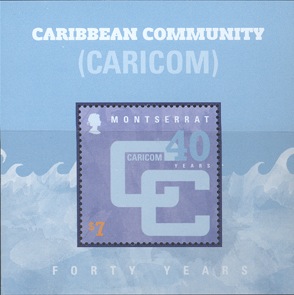 Seemingly less relevant to Montserrat is the sheetlet of 4 stamps and 1 miniature sheet which were released on 17 July 2013 to commemorate next year's Lunar New Year - the Year Of The Horse. Why an issue for the Year Of The Horse should appear so far ahead of the lunar new year is beyond me particularly as the New York-based agency which produces these items had released 2 stamps and a miniature sheet only 5 days before on 12 July 2013 on behalf of another of their client territories, Turks And Caicos Islands, to celebrate the Year of the Snake, about 6 months after the lunar new year had been celebrated. But of course the biggest question of all is what the Chinese new year has got to do with either of the territories apart from there being a lot of stamp collectors in China who may feel that they simply must have all lunar new issues no matter which part of the world the stamps originate from:- 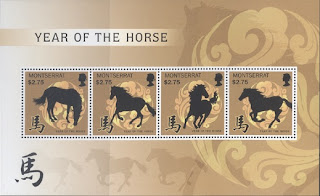 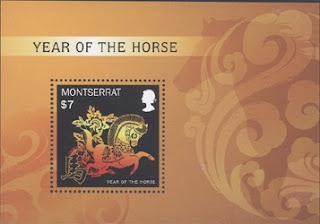