294. Rare Spices Of Zanzibar And Scarce Surcharges Of Cook Islands. 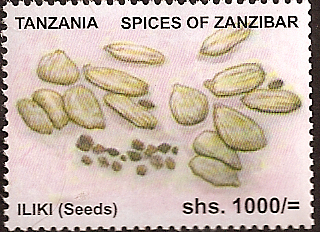 I have just managed to obtain a rarely offered set of 4 stamps and 2 miniature sheets which was issued by Tanzania on 26 April 2008 which is on the subject of "Spices of Zanzibar". I have seen this set offered on the Internet on 3 or 4 previous occasions but I have never seen it being offered for sale by any of the major new issue dealers and I think that this set must be one of the rarest of the issues from Tanzania in the period of 2007 to 2009. It is an interesting and locally relevant set which has been designed by a local artist and it emphasises the historical importance of spices to the island of Zanzibar. It is a worthy addition to a modern Tanzania collection. 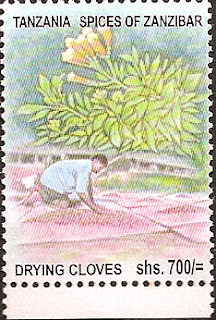 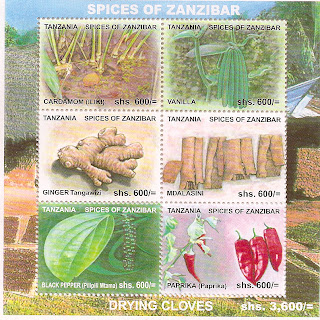 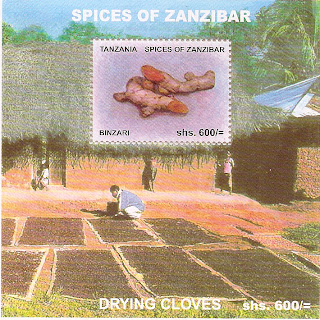 Previous stamps of Zanzibar have reflected this importance of spices, especially cloves, to the island and indeed a clove even appeared on the short-lived national flag of Zanzibar after it gained independence from Great Britain on 10 December 1963. Below I depict an official first day cover of the set of 4 stamps which was issued on the date of independence and, as well as the stamps themselves, the national flag is illustrated on the cover (the red flag of the Sultans of Zanzibar with a green disc at the centre on which is placed 2 cloves) along with the exhortation to "BUY ZANZIBAR CLOVES".
I include a detail of the cover to show the interesting flag as well as an illustration of the 30c value from the set which depicts a Zanzibar clove against the background of a rising sun. A portrait of Sultan Seyyid Jashmid was incorporated in all 4 designs of the Independence set but he was deposed in a coup on 12 January 1964 and the stamps, along with the contemporary definitive set, were overprinted "JAMHURI 1964", first locally by use of a handstamp (released 17 January 1964) and then by machine by Bradbury Wilkinson and issued on 28 February 1964. The national flag was replaced by a new temporary flag on the day of the coup.
Only one other national flag includes a prominently placed depiction of a spice (a nutmeg) on it - that is the Commonwealth territory of Grenada. 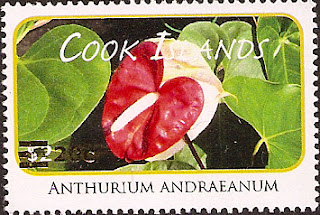 Meanwhile The Cook Islands Philatelic Bureau indicates on its website that there were 9 provisional definitives released on 9 April 2013 which were contemporary small sized flower definitives all surcharged 20c in gold. The website reveals that these were produced principally for sale at post office counters (which one would have thought was the first reason why any Post Office would request a printing of stamps) and in consequence only 600 sets were made available for philatelic sale. Without knowing this, I bought a set from the Bureau about the time when they became available but at the time there seemed to be only 8 values - depicted here - included in the set. The site now depicts the 9th value - 20c on the 90c Hibiscus Rosa Sinensis design - but has an accompanying notice that the set - all 600 of them - are now completely sold out.
I suppose I should be annoyed that I only have 8 out of the 9 values but to be truthful I really find that I can not be bothered about it since recent Cook Islands stamps are so completely lacking in interest for me. The Cook Islands' Agency has created an artificial scarcity of this particular issue by restricting sales to stamp collectors but if you must have them, I'm sure there will be a set lurking out there somewhere for sale no doubt at an inflated price. 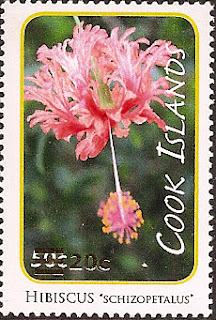