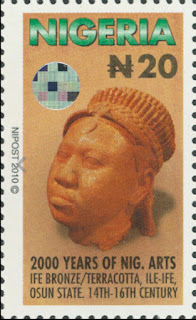 🇳🇬 News of another 2020 issue from NiPost, the postal service of Nigeria, plus the first issue of 2021 which really should have been released in 2020. On sale on an internet website are 2 very low face-valued definitives which were first noticed on commercial mail in 2020. These are previously issued stamps with additional security holograms. The seller adds the following information, “Low face value 3p and 5p UK sterling equivalent) so unlikely to be much used. A few sheets are known to have been sold in Ibadan and Lagos, but distribution is thought to be limited. The circular hologram suggests these are printed by Kalamazoo, and these are closely linked to the 2010 definitive series”. The cost of these 2 little items is £20. They appear to be scarce so this may be a rare opportunity to obtain these items. Potential buyers must make their own minds up about that. 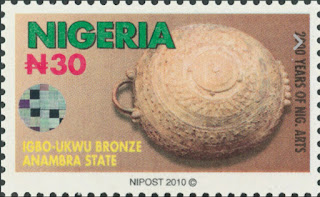 Also just appeared on an Internet auction site is a presentation pack apparently containing 2 different stamps issued to commemorate the 60th anniversary of Nigeria’s achievement of independence in 1960. The anniversary actually fell on 1 October 2020 but a local newspaper article dated 11 March suggests that they were only launched 5 months later and presumably went on sale that day as the internet auction site dealer clearly has the issue for sale now (and has not previously advertised the pair or pack). The N500 value depicts the official logo of the 60th anniversary celebrations which includes aptly a diamond. The N250 value depicts several local musical instruments.

The launch ceremony was a grand affair presided over by the Minister of Communications and Digital Economy, Isa Pantami. The issue was printed by Nigerian Security Printing and Minting plc.

Nigerian stamps are oddities in this modern world and more so in the last 4 or 5 years. The designs are often poor and the quality of the printing even worse, they are  hard to track down and buy at what may seem a reasonable new issue price but these factors actually make them considerably interesting. And when you look back over a collection of them it’s not hard to feel that they are among some of the more fascinating items which appear on the new issue market. 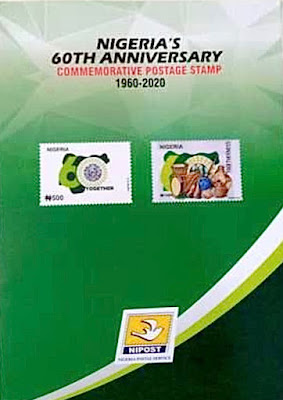 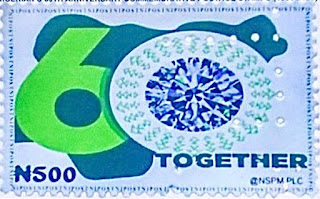 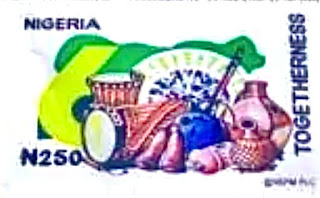 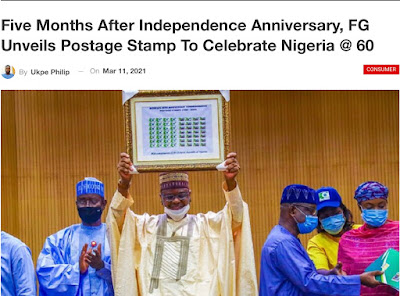