🇭🇰 In recent years Royal Mail has felt that subjects worthy of being honoured with commemoration on Britain’s new stamps should be those which it perceives as being likely to earn it a quick buck rather than being worthy of mention in a future book telling the country’s history. This is a great pity. Much of the popular culture featured on Royal Mail stamps at present is hardly likely to be mentioned by historians of British social history writing their histories in 2521AD. Early English and British culture has largely been ignored by the planners of Royal Mail’s new stamp issue programmes even though these little islands have a stunning catalogue of early (by which I mean pre-Victorian) culture which could be featured and celebrated philatelically. So we have had Only Fools And Horses but not Piers Plowman, Star Trek (not British at all) but not Beowulf , Marvel Comics (again, not British at all) but not The Canterbury Tales (there was 1 stamp a long, long time ago) and JK Rowling and Alfred Bestall (who? you ask - the creator of Rupert Bear) and not Daniel Defoe or Jonathan Swift. I’ve written it before, and quoted Oscar Wilde, that those who plan Royal Mail’s new issue programme are the sort who know the price of everything and the value of nothing which, you might say, is probably the basis for running a successful business but not, I think, choosing who or what should be commemorated on a historical document which is how a nation’s postage stamp should be viewed.

Other postal services have a better sense of history when choosing subjects for their postage stamps than does Royal Mail. One such postal service is Hong Kong Post which is to release a set of 6 stamps, 2 miniature sheets and 6 self-adhesive stamps (issued in the new ‘Collector Card’ format with the stamps on the front of the card and details of the issue printed on the back which I rather like) to commemorate the ‘Classic novel of Chinese literature - The Romance of the Three Kingdoms’ which is attributed to Luo Guanzhong and which dates back to the 14th century. The book itself is a historical novel about events in China which occurred in the Three Kingdoms period towards the end of the Han Dynasty from 169AD to the national reunion which took place in 280 AD. The events of the book are based on the Records of the Three Kingdoms which was written by Chen Shou. 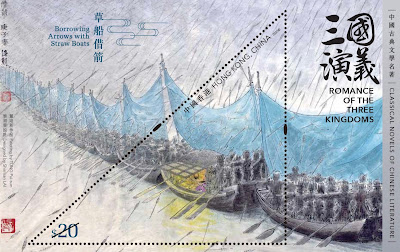 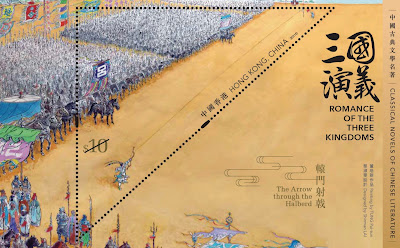 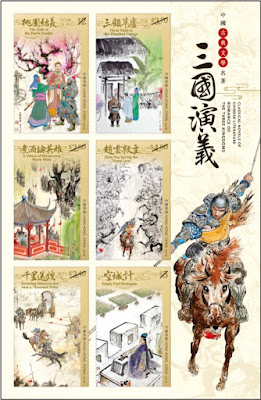 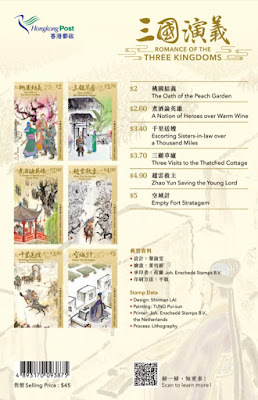 🇳🇿 New Zealand Post will issue 4 stamps and 1 miniature sheet on 3 March 2021 to commemorate the 150th anniversary of the Royal New Zealand Yacht Squadron. These colourful stamps were designed by John Morris and lithographed by Southern Colour Print and are perforated 14 x 14.5. Rating:- ***. 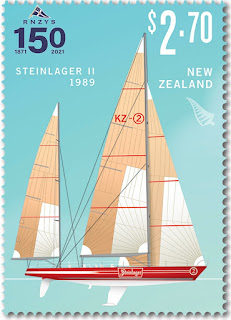 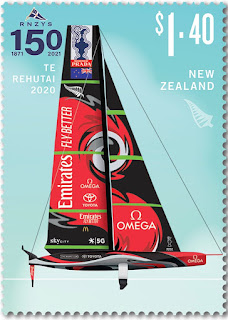 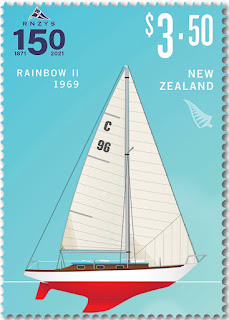 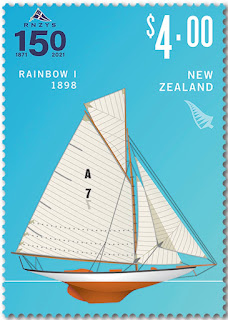 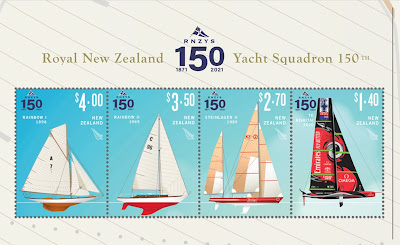