🇲🇻 After several years of patient waiting I have finally managed to obtain the 15MVR Turtle stamp for use on tourists’ postcards issued by Maldives Post in, I think, 2012 which turned up on piece in some kiloware as these stamps usually do. The kiloware also included the Dolphin postcard stamp issued at the same time though I did have it in my collection previously on an entire postcard.
There’s little more pleasing than finally tracking down a stamp long missing from one’s collection. 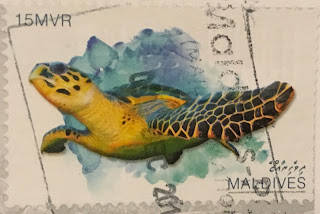 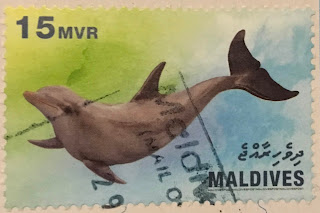 🇬🇭 It has also been a pleasing time for me because I managed to track down a couple of surcharges from Ghana dating back I think to the 2007 - 9 period. These again turned up in some kiloware and are stamps from the Christmas set originally issued on 19 December 1988 and are the 60c ‘Christ child’ value of that set with a GHc1 surcharge in black and the 80c ‘Virgin and Child with star’ stamp also with a GHc1 surcharge in black. These surcharges turn up from time to time and gradually the empty spaces in my Ghana collection are gradually being filled.
As I wrote in Blog 1451 I have recently had some luck in tracking down some long missing hard-to-get relatively recent issues including another from Ghana (a fourth stamp towards completing the set of 5 issued in 2016 which called for peaceful elections in the country) and the set of 4 miniature sheets issued by St Kitts in 2014 (Blog 1447) to commemorate the 30th anniversary of the establishment of diplomatic relations between Taiwan and St Kitts Nevis.
Everything turns up eventually. 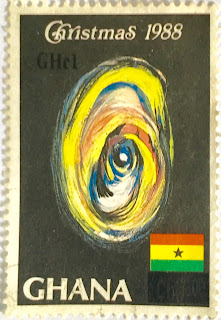 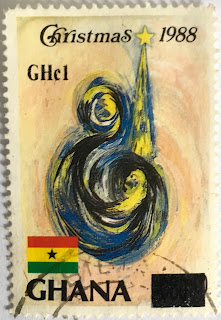 🇰🇮 The postal service of Kiribati intends to issue 4 stamps and 1 miniature sheet on 1 July 2019 to commemorate the 40th anniversary of the country’s achievement of Independence. The stamps will Birds.

In this era of excessive numbers of stamp issues it might be an attractive idea to collect only the stamps of the territories which still remain British territories. You could say the collection would consist of the issues of what remains of the British Empire but you would undoubtedly be described as an ‘imperialist’ by doing so. What is nice about the idea is that you would have stamps from territories in Europe, the Pacific, the Atlantic (north and south), the Caribbean, the Antarctic and the Indian Ocean - territories which as a group provide a wide range of climates, cultures, wildlife, scenery and history all bound together by their close ties to Britain.
How interesting it is too to see how the postal administrations differ in their approach to the present day new issue crisis where it’s hard to interest anyone in buying new issues and so an administration either issues vast amounts of philatelic products in the hope of finding something among them that will be sellable to collectors or non-collectors or effectively gives up producing new stamps because it’s just not financially worthwhile.
There’s a very real difference between the islands off the British Isles (the Crown Territories) and the Overseas Territories although Gibraltar’s approach to new issuing is much closer to the offshore islands than the Overseas Territories. The Crown Dependencies (and Gibraltar) continue to flood the market with new philatelic products while the Overseas territories issue barely any stamps at all. Perhaps it would be a good idea to drop the Crown Dependencies from the collection and concentrate on the very worthwhile pursuit of building up a collection of ‘modern British Empire’ stamps from the remaining Overseas Dependeies. Such a collection would be relatively inexpensive but pleasingly interesting.