🇰🇳 Ne’er Despair (I). Everything comes to those who wait. Five years after it was first released I have obtained finally the issue from the St Kitts postal service which I have mentioned before (see Blog 1244) and which commemorated the 30th anniversary of the establishment of diplomatic relations between St Kitts And Nevis and The Republic Of China which seems to have been a gift from the Taiwanese government to the St Kitts postal service. I have not seen previously any adequate illustrations of the issue and so at last I depict what actually turn out to be miniature sheets each containing 2 different se-tenant stamps on the same theme (1 representing Taiwan and the other St Kitts). The stamps are perforated.
I suspect that these items have been hard to obtain because the philatelic agency (IGPC) which handles the stamps of St Kitts did not put this set on general release to collectors because it did not wish to annoy the authorities in The People’s Republic Of China with whom it seems to have close links having an office in Beijing, often using a Chinese printer to produce its stamps and regularly producing stamps with inscriptions mostly in Chinese even when they are meant for theoretical sale by Caribbean post offices. Rating:- *****. 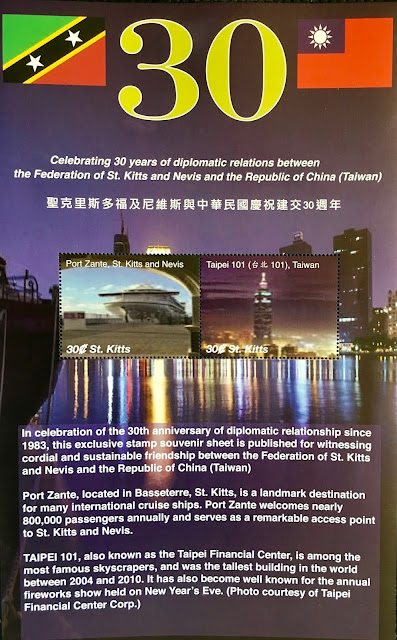 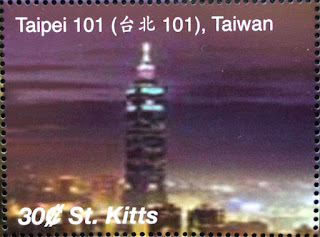 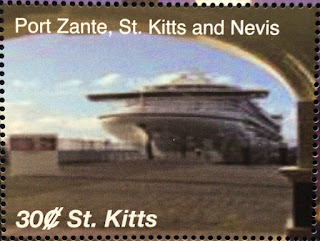 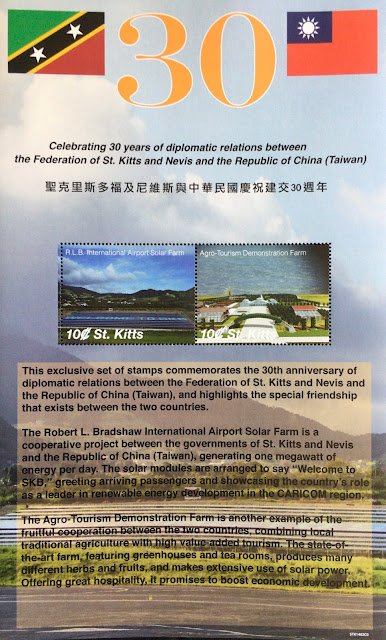 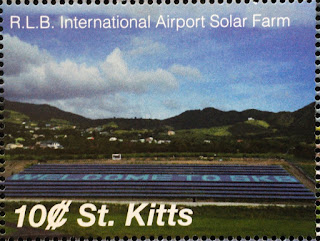 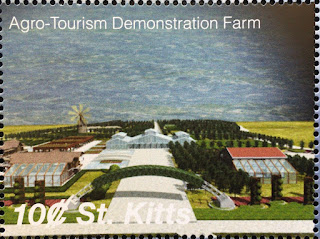 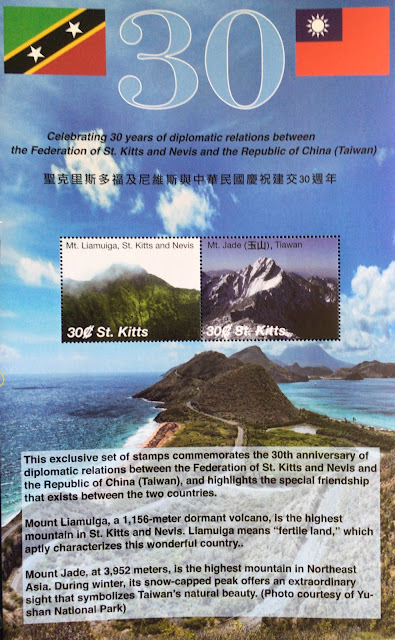 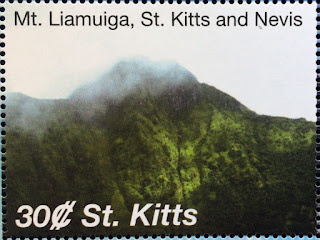 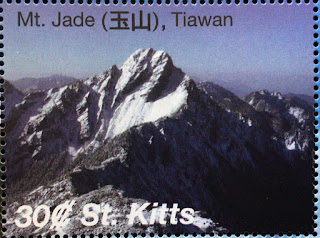 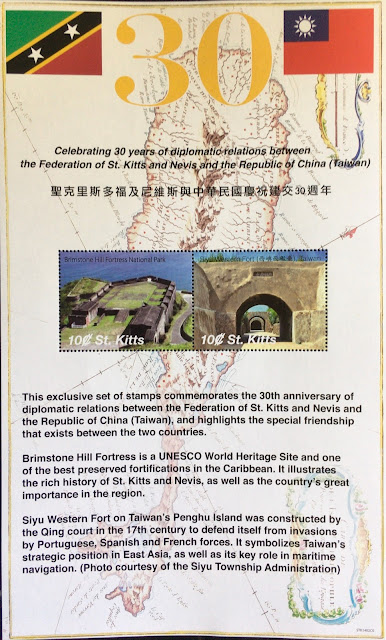 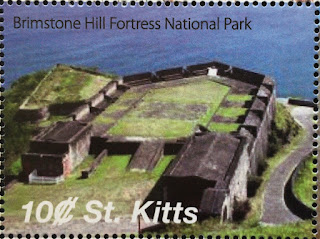 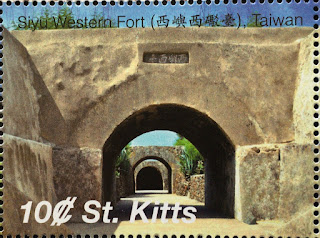 🇬🇧 I received 2 covers today containing stamps I had ordered from stamp dealers both cancelled by a four line meter mark commemorating the 75th anniversary of D Day (see Blog 1448). The inscription reads ‘75th anniversary/of the D-Day landings/6 June 1944/ #dday75’. The second cover has the cancellation applied aptly to a stamp depicting an RAF aircraft though sadly the the mark is somewhat indistinct but the 2 covers are a pleasing addition to the set of stamps and miniature sheet released by Royal Mail today, 6 June 2018.

🇺🇬 Ne’er despair (II). Sometimes if you buy stamps from abroad you may be a little worried about whether or not they are actually ever going to get to you. I do but sometimes you’ve just got to take a reasonable risk especially if the items you want are absolutely unavailable from any other source. Thus today (6 June 2019) I received a set of stamps from Uganda (see Blog 1389) which I had ordered from someone I knew to be a reliable dealer in East Africa and which, judging by the postmark on the cover containing the stamps, he posted to me on 11 February 2019. Its journey had taken about 4 months to get to me. I wonder where it’s been idling its time in those 16 weeks. I suspect that only it really knows and it’s not telling. Still at least I finally have the new additions to my Uganda collection. 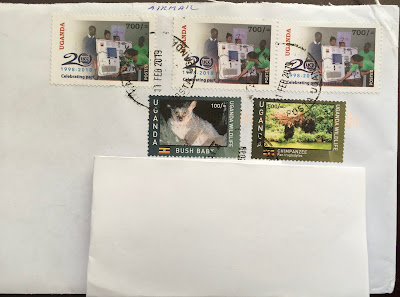 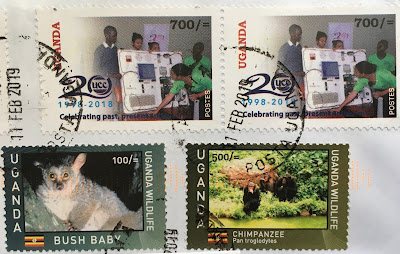 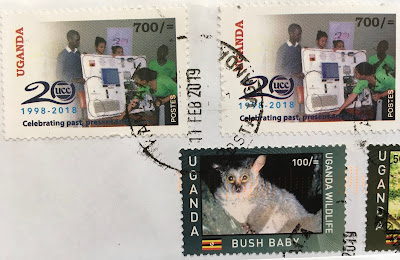 🇧🇹 Bhutan Post issued 2 miniature sheets, one containing a single stamp and the other 2 different stamps, on 25 May 2019 to commemorate the 150th birth anniversary of Mahatma Gandhi. Rating:- ****. 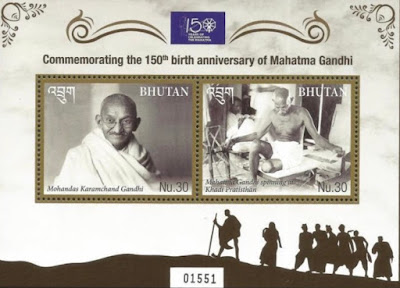 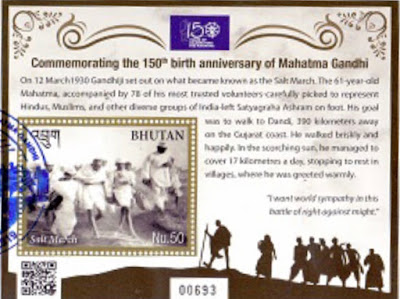 🇯🇪 Jersey Post will issue more of its Post and Go stamps with a tiresome additional inscription on 6 June 2019. This issue commemorates the 75th anniversary of the D Day landings in Normandy and the strip of 6 ‘Jersey Crest’ stamps will be inscribed additionally ‘D-Day 75th anniversary’ and dispensed from kiosk JE02 at the Head Office in Broad Street in St Helier while the ‘Jersey Flag’ single Post and Go stamp will be similarly inscribed and dispensed from kiosk JE03 situated in the foyer of the Jersey Post Headquarters in Rue Des Pres. Rating:- 0.

Jersey Post will also issue one of its ridiculously expensive ‘Collectors sheets’ in 1 July 2019 to commemorate the 75th anniversary of the D Day Landings. The sheetlet contains 2 panes of 10 x ‘UK rate’ ‘Jersey Flag’ greetings stamps and is sold for £17. Rating:- 0. 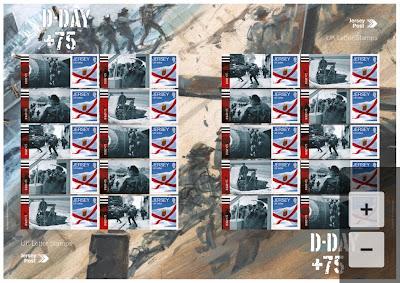 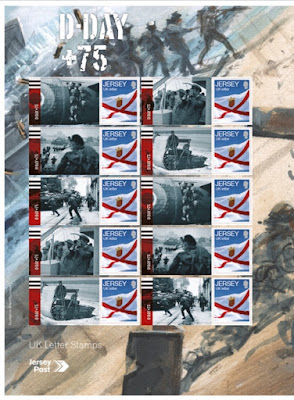 It is hard to see why Jersey Post feels the need to issue a set of 4 stamps and 1 miniature sheet to commemorate the 50th anniversary of the Investiture of The Prince Of Wales other than using it as an excuse to release yet another Royal-themed set which might bring some more money into its coffers but it does indeed see such a need. We must remember that Jersey is not part of The United Kingdom and geographically nowhere near Wales but Jersey does indeed share its royal family with Wales so that’s alright then isn’t it?
In fact it’s quite an interesting set especially in its depiction of the late 1960s costumes worn by The Queen and Princess Anne but with vast numbers of stamp issues emerging from St Helier this is yet another excessive issue and it won’t be finding its way into my collection when it is released on 1 July 2019. Rating:- 0. 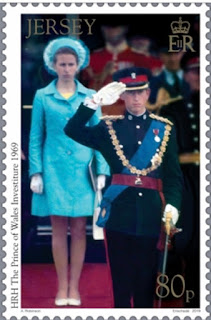 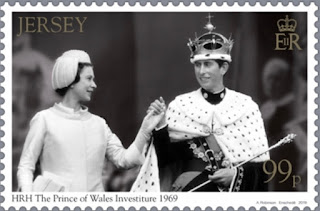 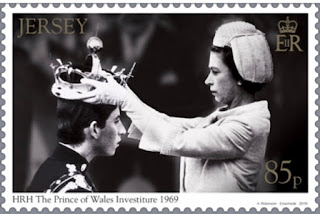 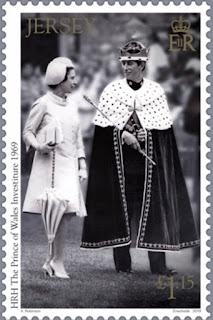 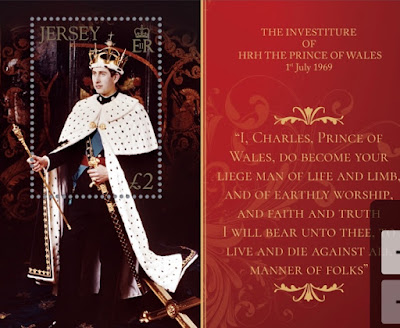