🇮🇲 In Blog 1402 I mentioned the upcoming issue to commemorate the 75th anniversary of D Day which the Isle Of Man Post Office plans to release and how it looks as though the designs of previously issued stamps were to be reissued. And indeed that is the case by the means of depicting the set of stamps issued in 1994 to commemorate the 50th anniversary of the Normandy landings in a ''Stamps on stamps' design. The set will cost £8.14p and it seems reasonable to me for collectors to be able to expect original designs for that price and not regurgitated designs which are clearly used to reduce the cost to the IOM Post Office of significant designer's fees. I shall not be adding this issue to my collection and will be glad to have saved myself £8.14p. Rating:- 0.
By the way, the planned date of issue is 22 April 2019.

Not content with releasing that expensive set the IOM Post Office also intends to issue another set of 8 stamps, cost £8.14p,, on 29 April 2019 to commemorate the 50th anniversary of the first manned lunar landing. I am not sure how significant the role of Isle Of Man was in the achievement of getting men to the moon. Rating:- 0.

🇬🇮 The Royal Gibraltar Post Office will issue 3 stamps on 8 March 2019 to commemorate International Women's Day. The designs are winning entries in an art competition for students which were chosen by The Ministry For Equality, which sounds vaguely Orwellian. The winning students were:- Sara Rumford, Kiarah Gomez and Eliana Medici and Stephen Perera is credited with designing the stamps. The issue was lithographed by Cartor. Rating:- **. 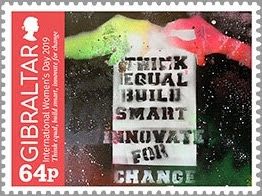 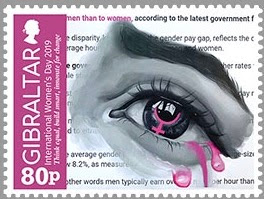 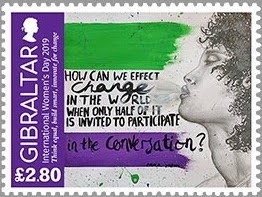 A further issue will also be released on 8 March 2019 to commemorate the 75th anniversary of the Normandy landings on D Day. Although the set is made up of only 4 stamps the face value will be £7.82p. The issue was 'designed' by Stephen Perera from photographs of Getty Images and lithographed by Cartor. Rating:- **. 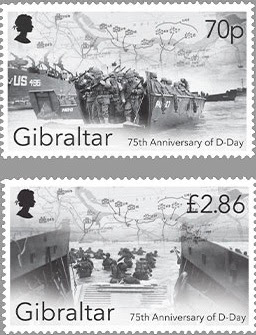 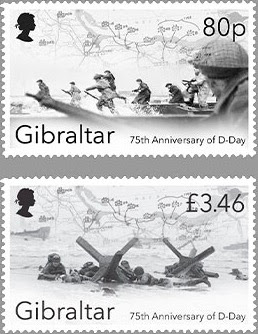