50th anniversary of the first flight of Concorde (in the year of Brexit an issue which features Anglo-French co-operation may either be a very good idea or a very bad idea depending on how negotiations have gone during the previous 2 years).
The Victorians - Birth bicentenary of Queen Victoria and Prince Albert
50th Anniversary of the Harrier jump jet entering RAF service
75th Anniversary of D Day
The Romans in Britain
Centenary of the Bentley car maker
150th Anniversary of the a Royal Philatelic Society
Bicentenary of Burlington Arcade (Another London-centric issue which has no meaning to the rest of Britain)
500th Birth Anniversary of Leonardo Da Vinci (this is ridiculous - great artist he may have been but British he was not. There are plenty of British artists who deserve philatelic commemoration before having to resort to featuring foreigners).

50th anniversary of the movie, "The Italian Job". A fondly remembered film but not that great in the broad pantheon of British movies. Hardly worth a stamp issue.
Ballet. Centenary of the birth of Dame Margot Fonteyn.
50th Anniversary of the British television programme, Monty Python's Flying Circus. The Monty Python team was featured quite recently in the British Comedians set.
Royal residences - Sandringham and Balmoral (in recent years Buckingham Palace and Windsor Castle have had their own sets - I think the theme has been done to death already and I can't work up any enthusiasm for even more).
Design classics
50th Birth Anniversary of Alexander McQueen, fashion designer
Tercentenary of the publication of Daniel Defoe's Robinson Crusoe. A notable English literary work but fraught with modern-day political incorrectness in the way the white Crusoe treats "Man Friday".
Cathedrals (hopefully outside London)
Bicentenary of the birth of the author George Elliot

Medical discoveries and innovations
Trees (centenary of the Forestry Commission)
Birth Bicentenary of James Watt
The Cricket World Cup, England and Wales 2019
Major UK engineering projects (an excellent idea but of course as usual the set is London-centric since it is based on the London Crossrail Project)
Great British scientists
Long-distance footpaths of The United Kingdom
Sea mammals
40th Anniversary of the television programme, Life On Earth. I would prefer the sea mammals alternative to The Life On Earth since the former is to feature wild creatures of UK waters while the latter presumably will feature random random wildlife from various parts of the world.

So - please Royal Mail - use subjects which are British and remember that most of the population of the country does NOT live in London.

The respondent to the survey must choose up to 3 subjects from 3 groups totalling nine but I find that I would pick more from one group than from another so my final list doesn't actually include my nine preferred subjects but if I do follow the rules then my list would be:-
Roman Britain (as the second part of a British history series which begins with this year's "Ancient Britain" stamps)
D Day
150th anniversary of the Royal Philatelic Society (a great opportunity to depict classic philatelic items
Ballet
Cathedrals
Design classics
Sea mammals
Cricket World Cup
James Watt

(If I didn't have to pick 3 from each category I would ditch "Design Classics" and replace it with Long distance footpaths).

Regardless of all the above, 2019 is shaping up to be a fascinating year philatelically since, as mentioned above, it will be the year when The United Kingdom leaves The European Union which may or may not have philatelic consequences. Alongside Brexit Scotland may well become an independent state if the Scottish Nationalists have their way which will give us a whole new country to collect and perhaps see a major reduction in postal rates in England, Wales and Northern Ireland since citizens of those countries will no longer have to subsidise the highly expensive postal service in Scotland which ensures remote islands and the furthest reaches of The United Kingdom receive their mail at the same cost to the service user as if they lived in a large town in the south of England.

Post And Go - IAR kiosk A009 in the Shakespeare Birthplace gift shop in Stratford upon Avon will dispense stamps from 20 March to 21 April with an additional inscription to commemorate "School's week". The last date of issue may be significant as it allows for a new issue to be then released with an inscription marking the 503rd birthday of William Shakespeare which will be commemorated by a grand parade through the town on Saturday 24 April. The parade usually ends at Holy Trinity Church which is where the body of Shakespeare is buried along with members of his family.
The Steam GWR Museum in Swindon will replace the Mail By Rail stamps on 15 March 2017 (dispensed by kiosk A010) with Machin Head Post and Go labels which will have the additional inscription, "King George V 90th". The Locomotive label will also be dispensed with the same inscription and the issue will be on sale until 14 April 2017. The issue commemorates the 90th anniversary of the construction of the locomotive "King George V".
The previously mentioned installation of a refurbished A005 at the East Anglia Railway Museum will take place on 20 March 2017. The kiosk will dispense Locomotive and Machin Head labels with the additional inscription "EARM".
I  visited the large central Birmingham post office in Pinfold Street yesterday to obtain a strip of NCR-printed Mail By Rail stamps which were are being sold currently from 4 of its 9 NCR kiosks. The strip of 6 x 1st Class labels obtained is depicted below with an IAR-printed strip from kiosk A014 which was situated at Spring Stampex 2017 in London for 4 days:-

I was surprised to find that 2 of the kiosks were selling "Poppies" Post and Go labels while the other 3 were dispensing Machin Head labels. Both Poppy labels were coded MA16 but the Machin Heads were being sold from one kiosk with a MA15 code and from another with MA16 code - the shade of colour of the 2 labels was very different from each other as shown below:-

🇸🇬 Singapore Post issued a set of 3 stamps on 17 February 2017 on the subject of local youth anniversaries. Subjects commemorated are:- the Centenary of Guiding in Singapore, the 50th anniversary of Outward Bound in Singapore and the Centenary of Lions International. The stamps were designed by Alynn Teo and lithographed by Secura and perforated 13. These are crisp, clear, straightforward designs as are so many of Singapore Post's new issues. Rating:- 0. 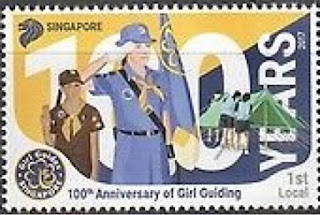 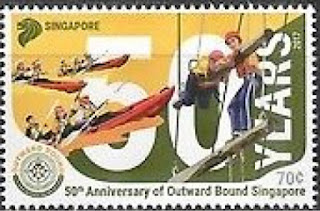 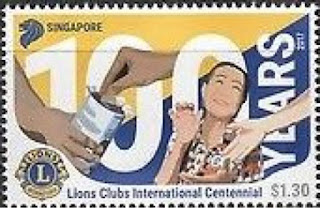