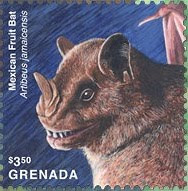 🇬🇩 In its latest publicity, the US-based philatelic agency, IGPC, which has previously described itself as "the world's most respected philatelic agency", includes news of an issue of stamps with the name of Grenada printed on them which depict various species of bats.

IGPC often produces sets of Wildlife stamps which feature species which are not found in the country whose name is printed on the stamps. This set is different since a quick look through the internet does suggest that most of these bats are indeed found on the island of Grenada. The featured species are:-
Mexican fruit bat (or Jamaican fruit bat) - found in many Caribbean islands
Pallas' Mastiff bat - widespread in the Caribbean area
Greater Bulldog bat - found in most Caribbean islands
Little yellow-shouldered bat - certainly a regional species but not listed in the Wikipedia list of mammals of Grenada
Great fruit eating bat - resident in Grenada according to Wikipedia article
Sebe's short-tailed bat - resident on Grenada according to Wikipedia list.
Generally, then, this issue seems to have direct relevance to Grenada and suggests that for once at least IGPC's designers have taken a bit of trouble to research their subject. Rating:- ****. 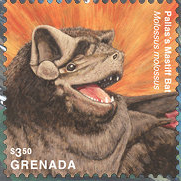 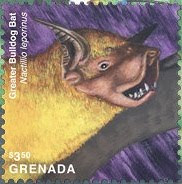 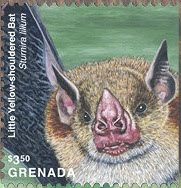 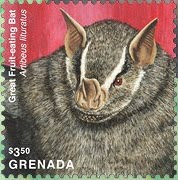 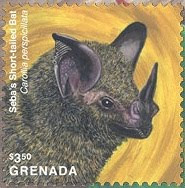 🇬🇮 The Royal Gibraltar Post Office issued new Post and Go stamps on 20 January 2017 from the kiosks situated locally at the Main Post Office (G102) and Parcel Office (GI03).
The "Barbary apes" stamps received new additional inscriptions - "Animals in Need" from kiosk GI02 and "Ivanhoe Society" from GI03. Meanwhile the new "Year of The Rooster" stamps went on sale at both the Main post office and the Parcel Office with the appropriate site-identifying inscriptions. The Ivanhoe Society is a local charity which seeks to help other local charities. It celebrated its 30th anniversary in 2016.
The "Animals in Need" inscription refers to the Animals In Need Foundation which is a local charity which aims to prevent cruelty to and neglect of animals in Gibraltar. These new Post and Go labels therefore commemorate worthy local subjects. Rating:- ***.

🇮🇳 India Post issued a single stamp on 7 March 2017 to commemorate the Centenary of the Yagoda Satsanga Society of India. The society aims to "make available all the ancient scientific teachings of Kriya Yoga for attaining direct personal experience of God." A colourful stamp which is more than the usual head and shoulders portrait that India Post regularly issues - rating ***. 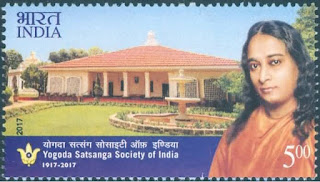 🇬🇭 Evidence of the growing decline of stamp collecting in the West is supplied by what is happening with the new issues coming out of IGPC. Although there are still a number of issues being released by the agency which feature the usual western celebrities - Elvis Presley, Diana Princess Of Wales, Kennedy, Marilyn Monroe, various popes and so on - far more issues seem to be appearing which feature subjects which, though hopelessly irrelevant to the countries whose names are printed on them, are all about subjects which appeal to collectors in China where IGPC has its own office.
Take, for instance this sheetlet of 12 different stamps which has the name of Ghana printed on them and which commemorates the 20th anniversary of the founding of the Shangai Philatelic Society - that's Shangai in China not Shangai in Ghana - which also features Chinese-style illustrations of the Chinese zodiac. This seems to reflect a new era in stamp collecting - new issues are generally irrelevant to both postal usage and philately in many western countries now but there's still money to be made in an apparently less discerning Chinese market. Rating:- 0. 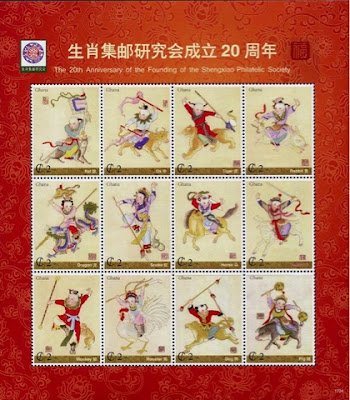 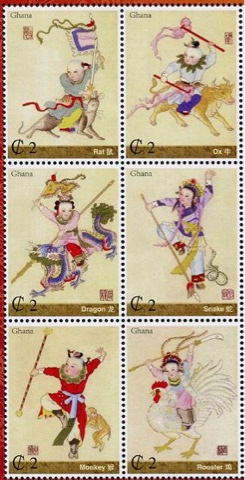 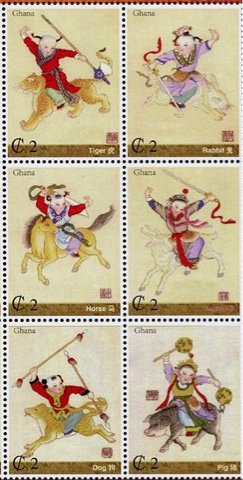