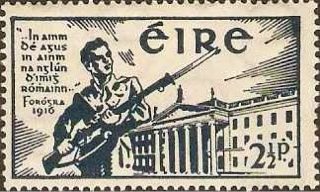 Easter Monday 1916 - 1200 Volunteers and Citizen Army supporters take over strongpoints in the centre of Dublin. 400 rebels under the command of Commandant James Connolly take over Liberty Hall.
The General Post Office (GPO) becomes the rebel headquarters where Connolly and 4 members of the Military Council - Patrick Pearse, Tom Clarke, Sean Mac Dermot (Mac Diarmarda) and Joseph Plunkett - oversee the Proclamation of The Republic and the raising of the flag of The Republic.
Elsewhere the rebels seize and set up positions at The Four Courts, Jacob's Biscuit Factory, Boland's Mill, South Dublin Union hospital complex and the Distillery at Marrowbone Lane. Forces under Michael Malin establish themselves at St. Stephen's Green. However, rebels led by Sean Connolly fail to take the lightly guarded Dublin Castle. Rebels take Dublin City Hall but fail to take Trinity College which is defended by a handful of lightly armed students. At midday, rebels attack the Magazine fort in Phoenix Park intending to seize weapons and blow up the building as a sign that the rebellion has begun but despite setting explosives they fail to seize any weapons.
The reaction of the British, completely unprepared for the rebellion, is uncoordinated and 2 forces, at Four Courts and O'Connell Street, come under fire and take casualties. Four men are killed at Mount Street.
Substantial fighting takes place at the South Dublin Union between the Royal Irish Regiment and Eamonn Ceannt's force at the hospital. Taking casualties the British force their way into a part of the hospital and force the small rebel force there to surrender.
Three unarmed policemen are shot dead by rebels and the the Commissioner withdraws the Dublin Metropolitan Police from the streets. As the police withdraw a wave of looting breaks out in the city centre especially in the O'Connell Street area.

Tuesday 25 April 1916 - Lord Wimbourne, the Lord-Lieutenant, declares Martial Law on Tuesday evening and hands over civil power to Brigadier-General William Lowe. By then, Lowe has secured Dublin Castle and concentrated his efforts on Liberty Hall which the British believe to be the rebel headquarters. The British have taken back City Hall during Tuesday morning.
Wednesday 26 April to Saturday 29 April 1916 - The rebels, having failed to take Dublin's 2 main railway stations, are faced with thousands of British reinforcements arriving by rail from Curragh and Belfast. By the end of the week, British strength stands at 16000 troops.
On Wednesday, the guns at Trinity College and on board the patrol vessel Helga, which had sailed up the River Liffey, shell Liberty Hall and afterwards the Trinity guns fire at the rebels at Boland's Mill and O'Connell Street.
The rebels at the GPO, Jacob's Factory, Boland's Mill and Four Courts see little fighting, the British being content to bombard the positions rather than launch a full assault. British snipers and machine guns situated in the Sherbourne Hotel make Michael Mallin's Citizen's Army positions at St. Stephen's Green untenable. Mallin's force withdraws to the Royal College of Surgeons.
Reinforcements of the British forces arrive from England on 26 April and disembark at Kingstown. As the troops advance towards Dublin heavy fighting occurs at the positions held by the rebel forces at the Grand Canal. The Sherwood Foresters come under heavy cross-fire as they attempt to cross the canal at Mount Street with the British suffering 240 men killed or wounded. The British eventually take Mount Street but 2 thirds of their casualties for the whole week occur there.
British forces also experience heavy losses at South Dublin Union and Marrowbone Lane. By the end of the week The British have retaken some, but not all, of South Dublin Union.
On Thursday 27 April, at North King Street, behind the Four Courts, the British attempt to take a well-barricaded rebel position but by the time the rebel headquarters is taken, the South Staffordshire Regiment has advanced only 150 yards down the road with the loss of 11 men and 28 wounded. Angry British troops break into houses in the street and shoot or bayonet 15 male civilians whom they accuse of being rebels.
At the Portobello Barracks a British officer summarily executes 6 civilians. 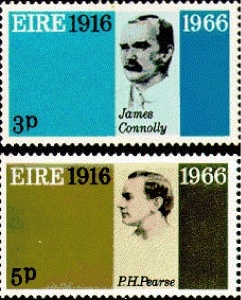 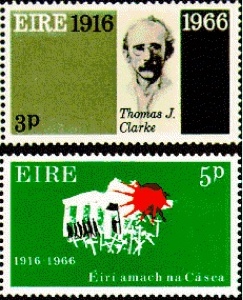 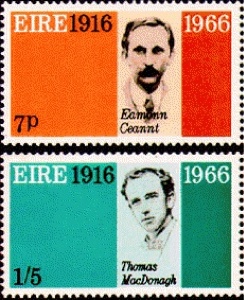 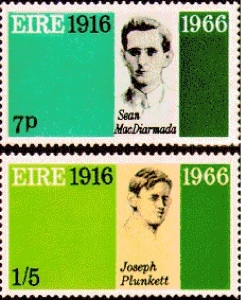 After days of shelling by the British, the GPO catches fire and the rebels are forced to evacuate their headquarters. They tunnel through the walls of neighbouring buildings and set up a new headquarters at 16 Moore Street. On Saturday 29 April 1916, Patrick Pearse orders the surrender of all rebel companies and surrenders unconditionally to Brigadier-General Lowe. The Rising is over.
260 civilians are dead, 126 members of the British forces have been killed, 17 policemen are dead and 82 rebels have been killed.
Of the British forces, 22 of the dead are Irishmen and all the police officers are Irish.
All seven of the signatories of the Proclamation of The Republic, depicted on the above stamps which commemorated the 50th anniversary of The Rising, are put on trial and sentenced to death and executed by firing squad at Kilmainham Gaol between 3 and 12 May 1916. In all, 90 people are sentenced to death although only 15 are executed eventually including Sir Roger Casement who is found guilty of high treason and hanged at Pentonville Prison in London on 3 August 1916.
Some of the survivors go on to become leaders of the independent Irish State which eventually becomes a republic in 1949 and leaves The Commonwealth.
See also Blog 700. 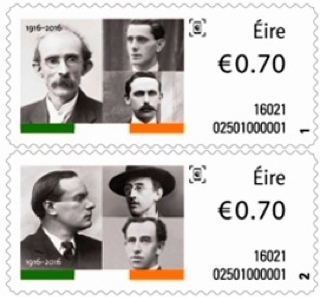 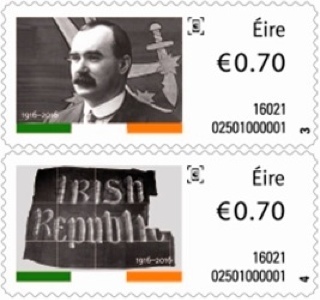 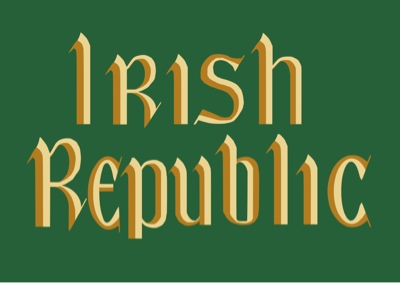 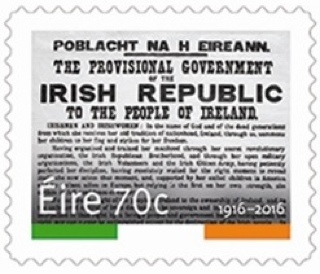 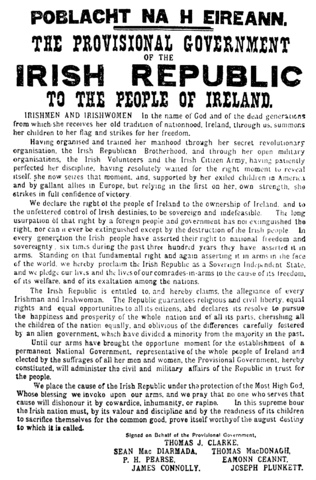 A pair of stamps was issued on 21 November 1949 to commemorate the establishment of The Republic:- 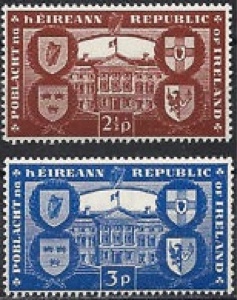