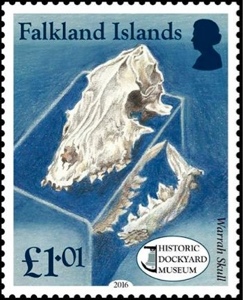 Falklands Post Service Ltd. will issue a set of 4 stamps on 30 March 2016 to commemorate the relocation of the Falkland Islands Museum to the Historic Dockyard site in September 2014. The five galleries of the museum concentrate on the subjects of local social history, maritime heritage, nature, wildlife, Antarctic connections and the events of 1981. The 4 stamps of the new set illustrate subjects which are relevant to some of these subjects.
The 76p value depicts an old peat-burning stove which were in use widely in the islands until the late 1980's. The £1.22 stamp features the Reclus Hut which was manufactured in The Falklands and provided shelter to 4 members of the Falkland Islands Dependencies Survey for 9 months from 1957 to 58 at Portal Point on the Antarctic Peninsula.
The 31p value depicts traditional horse gear used in the islands and the £1.01p value depicts the skull of a Falkland Islands wolf or Warrah which is the only canid to have become extinct in modern times (1876). The skull was found in 2010 by then 13 year old Faklander, Dale Evans, on his father's farm. For me, who has an interest in the depiction of dogs on stamps, this is the most interesting of the 4 values of the excellent set. 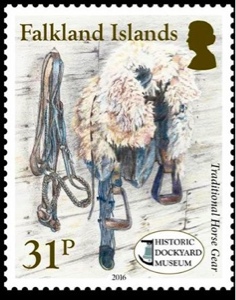 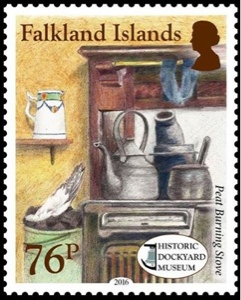 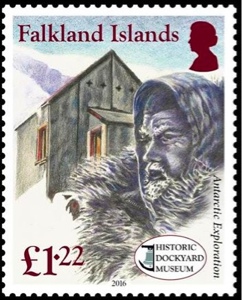 The Warrah has been depicted on previous Falkland Island stamps - one of a set of 4 issued on 19 May 1982 to commemorate the 150th anniversary of the voyage of Charles Darwin (he visited the Falkland Islands in 1833) who actually saw living warrahs and predicted, sadly only too accurately, that the species would become extinct once the settlement of men in the islands was fully established.
The second stamp to feature the creature was issued in 2009 to commemorate the bicentenary of the birth of Darwin and the design consisted of a lovely portrait of the Warrah by Victor Ambrus. 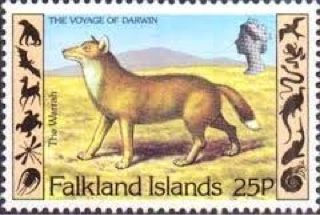 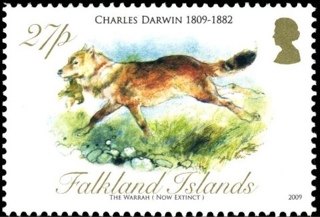 An excellent portrait by John Gerrard Keulemanns (1842 - 1912) of the Warrah is featured in the Wikipedia article about the creature:- 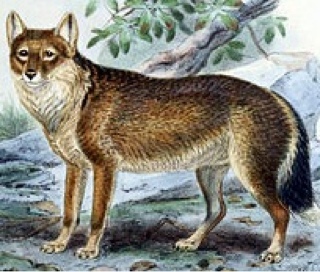 Wikipedia tells us that the warrah's closest living relation is the maned wolf which is found on mainland South America - it was depicted nicely on an Argentinian stamp of 1983:- 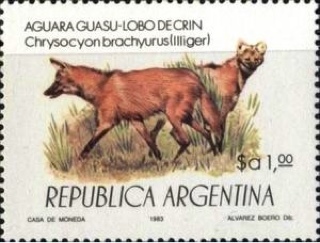 A footnote to this is the miniature sheet issued by IGPC in the name of the Sierra Leone postal administration in 2010 to commemorate the 200th anniversary of Darwin's birth. One of the 4 stamps included in the sheet features a Darwin's fox which is a critically endangered species found only in an area of mainland Chile and Chiloe Island. A specimen of this creature was first collected by Darwin from San Pedro Island off the Chilean coast in 1834. Recent genetic studies have shown that it is not a fox but in a genus of canid more related to the wolf. To me it looks very similar to the Falklands wolf. The miniature sheet also has an illustration of a canid in its left hand border which looks more to me like an illustration of the Warrah than Darwin's fox. 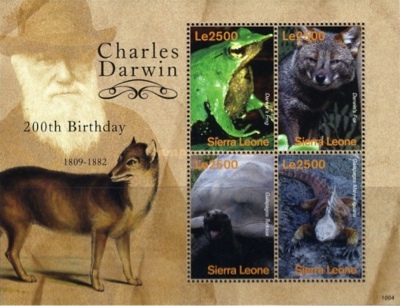 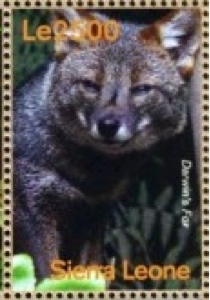 The new set of Falkland Islands stamps was designed by local artist, Grizelda Cockwell, and lithographed by BDT International Security Printers (perforated 14). Not surprisingly, the quality of design and printing,  the originality and relevance of subject matter and the use of locally postally relevant values for the stamps, tell us that the Falkland Islands postal service was assisted in bringing this issue to fruition by Pobjoy Stamps/Creative Direction. Rating:- *****. 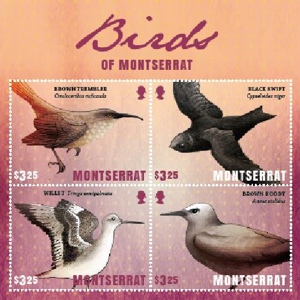 Bird Stamps org. has revealed that from information received from the Montserrat Philatelic Bureau, a set made up of a sheetlet of 4 different stamps and 1 miniature sheet on the subject of Birds of Montserrat will be released on 28 March 2016. Sadly the quality of the art used in, and the general design of, the issue is rather poor, hence:- Rating:- **.
The Philatelic Bureau in Montserrat seems to take its stamp issuing very seriously and it's such a pity that it continues to use IGPC to produce its stamps for it with the resultant frequently irrelevant subjects and often poor designs.
I dream one day that many of these territories will see the good sense in, and possible financial benefits of, using an agency which respects the territory for which it is producing stamps as well as understanding the importance of high quality, relevant designs and printing. In short, I dream of the day when many more of these territories give their contracts to the impeccable Pobjoy Stamps/Creative Direction and bring a lot of pleasure to collectors of new issues. 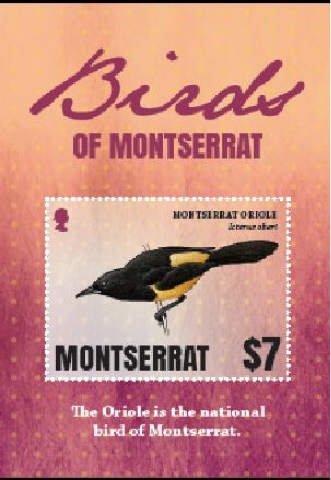 This week's Stamperija-produced Commonwealth items are stated to have been released on 21 December 2015 and have the name of Sierra Leone printed on them. The products take the form of 10 "sheetlets" each containing 4 different "stamps" and 10 accompanying "miniature sheets" and are said to have been produced in limited editions of 1000 each.
The subjects portayed on these products are "Alexander Fleming and medical mushrooms" (?!), Charles Darwin, Scuba diving and game fishing, Nelson Mandela, 245th birth anniversary of Ludwig van Beethoven, Rugby football, 80th anniversary of the death of Auguste Gustav Citroen, Horse racing, Tour de France cycle race and Rotary International. Rating:- 0. 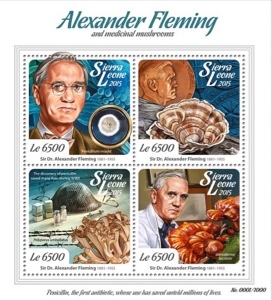 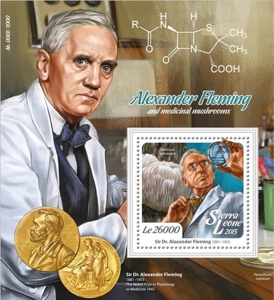 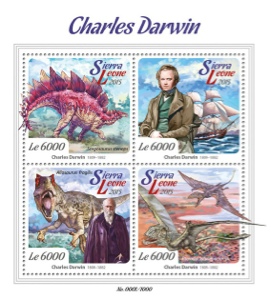 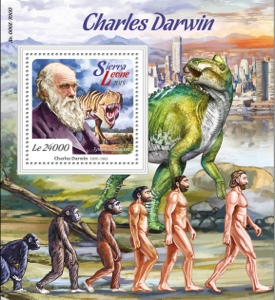