426. The Search For Universal Mail Stamps. 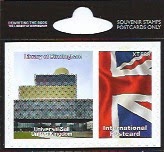 In Blog 395 I detailed the latest batch of strips of postcard airmail stamps which had been issued by Universal Mail United Kingdom for use by tourists to send their postcards abroad while visiting England, Wales, Scotland and Northern Ireland.
I detailed the various issues and noted that they really came in two batches - those produced by Universal Mail which highlighted various tourist attractions (including a series on the south-west of England where each booklet was devoted to a particular county in the region) and the so-called "Bespoke" booklets which were again divided into 2 types - those produced for attractions which come under the umbrella of English Heritage and those which were produced by individual sites not associated with English Heritage or The National Trust (except UK 0099 which is a National Trust site).
Universal Mail's own booklets can be bought from them directly (numbers UK0094 [Lake District] and UK0100 to UK0105 [counties of the South-west]) but the various Bespoke issues are not sold to collectors by Universal Mail nor are the various English Heritage stamps (UK0081 to UK0092) sold as a group by that organisation - instead the strips must be bought directly from each individual site. Thus to obtain the complete recent issue which dates back to April 2014 (the date code on the stamps is 12/13) the collector must contact all 19 tourist attractions individually which, having done so, I can confirm to be a monumental task.
Nor is it a matter of writing to each site and enclosing a cheque as payment for the required number of strips of stamps since prices of the strips vary considerably from seller to seller and you need to know what those prices are. The price for the English Heritage strips is £6.25p per strip. The prices of the Bespoke strips from individual attractions are:-
Cawdor Castle (Scotland) - £6.40p (UK0093);
Courtauld Gallery - £5 (UK0095);
Library Of Birmingham -  £5.50p (UK0096);
Warwick Castle - £4.35p (UK0097);
Discover Stratford-upon-Avon - £5.15p (UK0098);
Carrick-a-Rede (Northern Ireland) - £4.85p (UK0099) (this is a National Trust strip of stamps);
HMS Victory (National Museum of the Royal Navy, Portsmouth) - I paid £20.20 for 3 strips plus postage (UK0106). 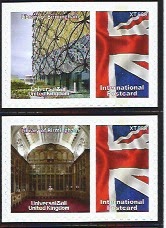 Apart from Birmingham Library, Warwick Castle, Kenilworth Castle and Stratford-upon-Avon, all of which are within easy travelling distance from my home and which I was able to visit in person, I obtained the strips from the various tourist sites by first ringing the telephone numbers which Universal Mail supply to collectors and enquiring about the price of each item and then sending a cheque to each place with a covering letter and a stamped self-addressed envelope. The Courtald Gallery and The National Museum of the Royal Navy were both able to take orders over the telephone and accept payment with a debit card.
It's true to say that during the course of this prolonged telephone tour of the British Isles I spoke to some extremely helpful and pleasant people and my orders for the stamps were dealt with kindly and efficiently and many of the people I spoke to were very charming and keen to help me obtain the stamps. The two ladies I spoke to in Carrick-a-Rede in Northern Ireland were very kind and charming but at all sites I received cheerful, kind and pleasant help from people who seemed very keen to help me complete my philatelic quest.
The variation in price was surprising with the strip sold by Warwick Castle being as little as £4.35p and that sold by The Courthald Gallery being £5 while those from Cawdor Castle and The Naval Museum were priced at more than £6 as were all the English Heritage items.
I spent a number of hours contacting the various tourist attractions in my efforts to obtain all of these items and the financial cost of postage for my letters to and from each tourist attraction was not inconsiderable. It's only when you embark on a project such as this that you really appreciate just how much work is involved in being a professional new issue stamp dealer who is making an effort to obtain the more obscure items which appear on the new issue market for his/her customers.
Forty years ago, at least the stamps of most Commonwealth countries could be obtained from a finite number of philatelic agents such as The Crown Agents or IGPC but now so many countries have withdrawn from using philatelic agents to market their philatelic products and such products are only obtainable from individual postal services who frequently put out only scanty information about such issues that tracking down many new issues must be a nightmare. It isn't really surprising then that the mark-up on price of new issues from dealers is greater than some collectors think they ought to pay.
I do wish Universal Mail could persuade its "Bespoke" customers to allow them to sell their new stamps straight to collectors rather than having to contact every site. A lady from Universal Mail told me it was like a "Treasure Hunt". I suppose that's one way of looking at it but I'm sure more of these booklets would be sold to collectors if they were easier and less costly to obtain. After all, New Zealand Post make their Bespoke personalised stamps available to collectors in a special year pack every year and such an item would improve Universal Post's stamps accessibility and surely boost sales. 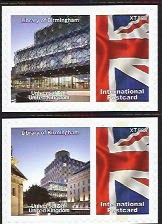 I believe that these items are a necessary part of any collection telling the story of the the British mail service(s) and are additionally interesting and attractive and some of the 106 strips issued so far must be very rare.
Of course if one is able to visit some of these tourist attractions one gets to see many fascinating places spread across the countries that make up The United Kingdom and other interesting tourist souvenirs can be found as well as the Universal Mail stamps. The gift shop at Birmingham Library was selling a large postcard when I visited there and the picture on the obverse depicted an attractive dusk aerial view across the city:-

The reverse of the postcard included an imprinted stamp-like motif at the upper right corner which could easily be mistaken for a postally valid imprinted stamp especially as there is no advice on the card that a postage stamp must be applied to the postcard:-

Which brings me to the question of what constitutes a "postage stamp" at this present time. The various private mail carriers in Britain today mainly use envelopes with imprinted identifications at the upper right of the envelope where a stamp would normally be placed but there are at least two which place adhesive labels on envelopes as depicted below. Are these postage stamps? The most recent Stanley Gibbons Commonwealth Catalogue in my possession (2000, so possibly describable as "historical" rather than "contemporary" - this may similarly be said about myself) ascribes "Full listing" to postage stamps which are:-
1. Issued by a legitimate postal authority (this was in the days before privatisation of the postal service in Britain so presumably we might substitute the term "legitimate postal service" - perhaps Stanley Gibbons has done so. Anyone in possession of a more up to date catalogue may wish to check;

2. Recognised by the government concerned;
3. Must be adhesives valid for proper postal use in the class of service for which they are inscribed;
4. With the exception of postage dues and officials, must be available to the general public, at face value, in reasonable quantities without artificial restrictions being imposed on their distribution.
Abbreviated Appendix entries include stamps from countries which either persist in having far more issues than can be justified by postal need or have failed to maintain control over their distribution so that they have not been available to the public in reasonable quantities at face value.
It seems very difficult to disagree with these criteria even though the Gibbons Catalogue editor has been wholly inconsistent in his application of these criteria over the years especially in the matter of which stamps have been given "Full listing" and those which have been relegated to the Appendix (even now, despite placing numerous Stamperija-produced philatelic products from Solomon Islands and Mozambique in the Appendix, the Catalogue listing of the small island of St. Vincent, whose stamps are produced by the prolific IGPC agency, reaches No. MS 6003 in the July 2014 edition of Gibbons Stamp Monthly).
Criterion 4 above poses problems for the Universal Mail Bespoke stamps since, being only available from a single geograhical location, they clearly have "restrictions imposed on their distribution" and with varying prices charged by different places they would seem not to be sold to the public at face value i.e. the actual cost of sending the postcard to which they are applied.
The adhesive labels used by other private companies are clearly not available to the general public but are produced for commercial operations to apply to letters or packages and so this definition which requires availability to the general public should probably now be reviewed if they are actually being used by the commercial sector as part of the general postal service. Such items really are adhesives which when applied to mail indicate the payment of postage. I'm sure many more of these items are used as indicators of genuine postal use than will ever be the case of the St. Vincent And The Grenadines 4 miniature sheets which commemorate the bicentenary of the publication of "Pride And Prejudice" to which The Gibbons editor has given full catalogue status in July's Catalogue Supplement. I collect examples of these new sort of adhesives to include in my British collection to add to the story of the development of the mail and, let's face it, they cost nothing other than the few seconds it takes to cut them from the envelope to which they have been applied:-