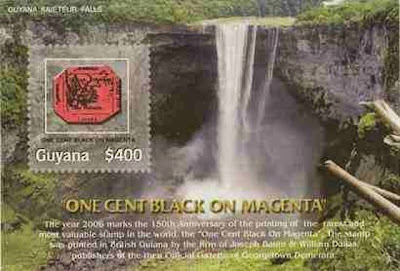 The BBC described the British Guiana 1c Black on Magenta as "The Holy Grail of Stamp Collecting"  after its recent sale by Sotheby's in New York for £5.6 million. When the previous owner, John Du Pont, had bought the stamp in1980 it had achieved the price of £551,000. The publicity surrounding the current sale tells us that this small piece of paper is now the most valuable item for its size and weight in the world. The Telegraph newspaper stated that the stamp was known as the "Mona Lisa" of the stamp world although I have to say that I have never heard it called by that name before but this highlights how stamps and their values can still induce interest in the popular press, always in search of some sensation or the other, even if the general public may be less thrilled by it all and perhaps, even, somewhat appalled that so much money should be spent on a stamp.
We stamp collectors of more modest means can, however, obtain a sort of official copy of this stamp with postal validity by obtaining one or more of the rather less rare stamps since issued by Guyana, the name of British Guiana since 1966, which commemorate the stamp. The miniature sheet depicted above was issued on 27 July 2006 to commemorate the 150th anniversary of the printing of the 1c Black on Magenta. The surrounding design features a view of the Kaieteur Falls. 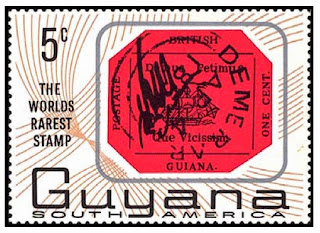 The pair of stamps (5c and 25c) issued on 23 February 1967 on the subject of "The World's Rarest Stamp"depict good illustrations of the stamp although the illustration is almost unrecognisable when compared with the "real thing" (shown below) which seems to be a rather grubby looking piece of work and is certainly not a thing of beauty (though beauty is in the eye of the beholder and a value of £5.6 million tends to increase its innate attractiveness). The 1967 stamps were designed by Victor Whiteley and lithographed by De La Rue:- 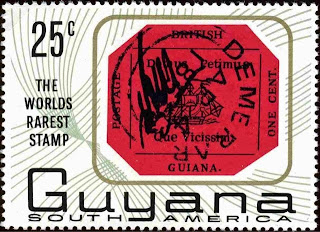 A set of 4 stamps was issued on 11 June 1979 to commemorate the centenary of the death of Sir Rowland Hill who is generally credited with the invention of the postage stamp and one of them featured the 1c Black on Magenta. The set was designed and lithographed by John Waddington:- 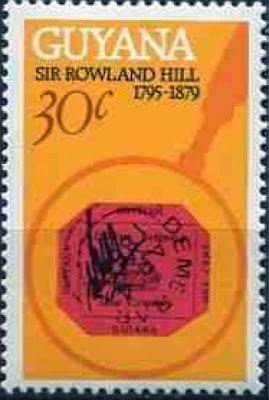 Perhaps now, after all the publicity of the recent sale, Guyana will give us a new set of stamps to commemorate the 1c Black on Magenta and give us another opportunity to add a new version of the stamp to our collections.