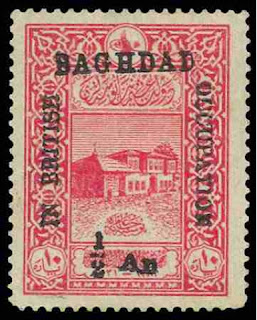 Iraq was part of of The Turkish Empire from 1638 and comprised the vilayets of Basra, Baghdad and Mosul. At the beginning of the First World War, British troops were landed at the port of Basra to protect the oil pipeline there and they occupied the town on 22 November 1914. The British subsequently occupied Baghdad in 1917 and Mosul, in the north, on 1 November 1918. Turkish stamps were overprinted "BAGHDAD IN BRITISH OCCUPATION" and surcharged (depicted above and below) for use in Baghdad and issued on 1 September 1917. A different overprint was also applied to some stamps - this took the form of a six-pointed star with the the date "1331" in Arabic positioned inside a crescent (an additional 1 anna value had the overprint which was in the form of a five pointed star with the date "1332" in Arabic).
These stamps were also issued in Mosul on 28 January 1918. 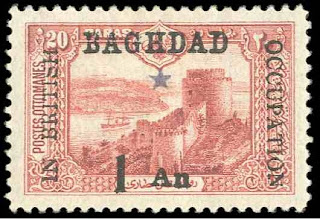 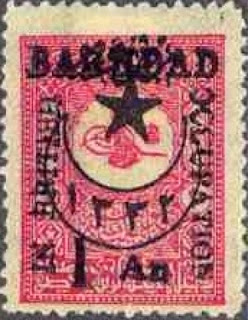 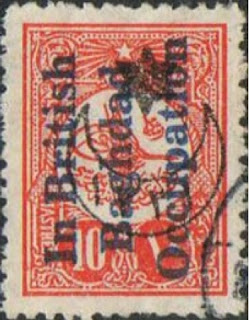 A general issue for Iraq was released on 1 September 1918 and again former Turkish stamps, first issued in 1914, were put to use by surcharging them and applying the overprint, "IRAQ IN BRITISH OCCUPATION". The overprinting was carried out by Bradbury Wilkinson:-

Mosul was occupied by British and Indian troops of the Indian Expeditionary Force (IEF) but the status of the vilayet was disputed - the French expected to take this part of Iraq) and so the general "IRAQ UNDER BRITISH OCCUPATION" stamps were withdrawn from sale and replaced by overprints on former Turkish fiscal stamps with the inscription "Postage  I.E.F. 'D' and with surcharges applied. The 1 anna surcharge was made on 2 stamps - one with a large tougra - that of Sultan El Ghazi - at its centre and the other with the small central tougra of Sultan Rechad. Similarly there are 2 versions of the 3 annas value:-

The 1R value of the "IRAQ IN BRITISH OCCUPATION" was similarly reissued in 1921 with a small tougra at the central top of the stamp and both the half anna, one and half annas and 2 annas were rereleased in 1921 on paper with multiple script CA paper having previously been on unwatermarked paper the watermark was sideways on the 2 lower values:-

The British and the French had shown their intentions to carve up the Middle East into spheres of their own influence by the Sykes-Picot Agreement which was concluded on 16 May 1916. By this agreement, the French were allocated control of northern Iraq, Syria, Lebanon and south-eastern Turkey and the British were to gain the coastal strip between the sea and the River Jordan, Transjordan, southern Iraq and a small area which included Haifa and Acre. The British Occupation of Iraq ended on 25 April 1920 when the Supreme Council of The Allies assigned a Mandate of The League of Nations to Britain to administer the territory.
The French deposed King Faisal of Syria on 24 July 1920 and in March 1921 at the Cairo Conference, the British decided that he would be an acceptable leader for Iraq.  King Faisal was made King of Iraq on 22 August 1921.

An impressive new set of 12 stamps was issued by The Mandate on 1 June 1923 with an additional 2R stamp in a revised colour being released in 1925. The set was designed by Edith Cheeseman and C. Garbett and was printed in typography (1R value) or intaglio by Bradbury Wilkinson:-

A Re1 value which depicted King Faisal I was issued on 1 April 1927. This was printed in intaglio by Bradbury Wilkinson:-

The design in a new colour was used for the 25r value of a new definitive set which was issued on 17 February 1931. Two other portraits of King Faisal were used in the set - one on the 8 low anna values and the other on the 4 higher values (1r to 10r):- 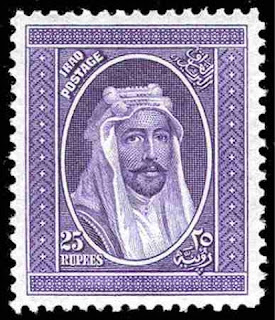 As the result of the introduction of a new currency (1000 fils to 1 dinar), the contemporary definitive set was surcharged and reissued on 1 April 1932:-

On 3 October 1932 Great Brirain gave up its Mandate in Iraq and the country became a fully independent Kingdom with King Faisal I as its Head Of State. However Britain continued to retain strong links with, and influence over, the country and in 1956 Iraq signed the Baghdad Pact with Britain which established an alliance of Britain, Iraq, Turkey, Iran and Pakistan. In 1958, Jordan and Iraq proposed a Union of Hashemite monarchies together with Kuwait but Britain did not want to grant independence to Kuwait and relations between Britain and Iraq grew icy with the latter becoming increasingly isolated.
On 14 July 1958, King Faisal II was deposed in a military coup and subsequently executed by the revolutionaries and Iraq then experienced a sequence of military regimes which culminated in the rise to power of Saddam Hussein. This tyrant fought a war with Iraq's Shi'ite neighbour Iran and then invaded and annexed another neighbour, Kuwait in 1990. The occupation of Kuwait was resisted by an international force which included the British and other Commonwealth forces which led to the expulsion of the Iraqis from Kuwait.

Then, in 2003, under the false pretext that Saddam Hussein's regime was in possession of weapons of mass destruction, United States forces, supported by the British, invaded Iraq and deposed Hussein who was eventually captured and executed. British forces occupied the southern part of Iraq centred on Basra while US forces occupied Baghdad, central Iraq and northern Iraq. The US-British forces established a Coalition Authority to rule Iraq and a number of Iraqi groups, including a group called the Islamic State Of Iraq, fought against the Coalition forces which led to a period of sustained conflict which lasted until December 2011 when the Coalition Authority came to an end. The British had withdrawn their last troops from Iraq in May 2011 after an 8 year-long campaign.
The Iraq Post Office commemorated the first anniversary of the evacuation of the Coalition Authority from the country by the release of a pair of stamps in 2012. The stamps appeared almost 100 years - 96 to be exact - after the French and British had agreed their earliest plans to carve up the Middle East between them in the Sykes-Picot agreement. The design of the stamps include the Iraqi national flag which was adopted by the elected parliament of Iraq on 22 January 2008:- 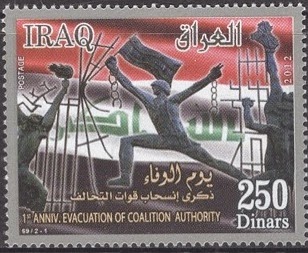 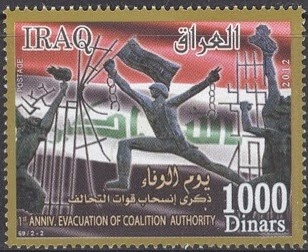