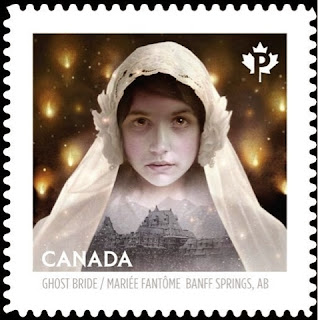 Sometimes, postal administrations go a little mad when choosing the designs for new stamps. I don't think that they really fully consider what the recipient of a letter with certain of the stranger stamp designs applied to it must feel. In the not too distant past Royal Mail has issued a stamp which depicted gravestones, The Isle Of Man issued a miniature sheet which depicted the corpse of a dead priest laid across it and again, Royal Mail issued a stamp depicting a young man physically assaulting an old school headmaster.
Now Canada Post has given us a set of 5 stamps and 1 miniature sheet which include a sinister photograph of 3 human skeletons in period costume looking out at the recipient of the letter in a rather unsettling fashion. The issue was released on 13 June 2014 on the subject of "Haunted Canada" and depicts the Ghosts of Fort George (below); The Ghost of the former French Governor, Louis de Buade, which is said to haunt the Fairmont Le Chateau Frontenac Hotel; the Burning Ship of Northumberland Strait; the Ghost Train of St. Louis, Saskatchewan, and (spookiest of them all, depicted above) the Ghost Bride of the Fairmont Banff Springs Hotel who fell downstairs to her death when she caught the heel of her shoe in the train of her wedding gown and is now said to be seen to dance a lonely wedding waltz in the hotel ballroom:- 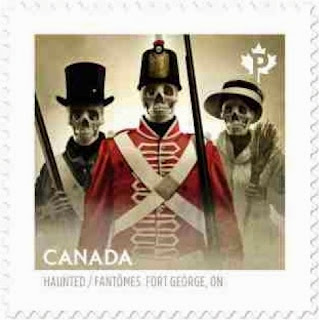 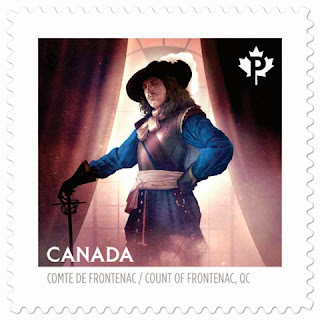 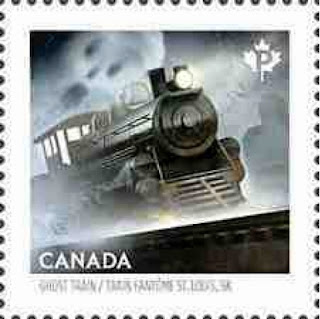 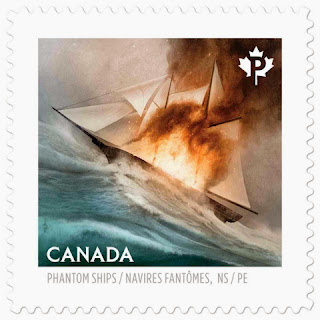 The designers of the Haunted Canada stamps are Lionel Gaudoury, Terry Popik and  Context Creative and they were lithographed in booklets of 10 (2x5) self-adhesive stamps by Lowe Martin. The miniature sheet is gummed and the designs include holographic foil. 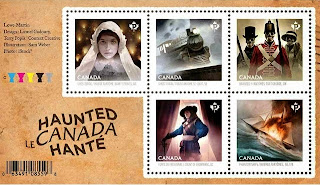 Canada will also issue a set of 7 different stamps and 2 miniature sheets on 7 July 2014 as part of its ongoing series on the subject of Canadian photography. The issue consists of 5 self-adhesive domestic rate stamps issued in a booklet of 10 (5 x 2 of each design), 1 x $2.50 international rate self-adhesive stamp (issued in a booklet of 6) and 1 x 1.20 USA rate self-adhesive stamp (1 booklet of 6).  All stamps are also issued on gummed paper in the form of 2 miniature sheets - 1 sheet containing 3 x 'P' and 1 x $2.50 and the second containing 2 x 'P' and 1 x $1.20. The US rate stamp depicts aptly a photograph of  "Sitting Bull And Buffalo Bill" which dates to 1885:-

The stamps were designed by Stephane Huot and lithographed by Lowe Martin.
Canada will also issue a stamp on 19 June 2014 to commemorate the Redblacks Ottawa Canadian Football team which is a new team playing in the Canadian Football League. The design of the stamp has not yet been released but it will be released presumably in self-adhesive format as a coil and booklet of 10.
Ireland issued a pair of stamps on 12 June 2014 to commemorate the World Flower Show held in Dublin during June 2014. The stamps were designed by Atelier David Smith and lithographed by Irish Security Stamp Printers:- 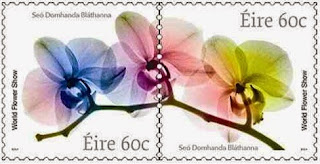 Stamperija has released further philatelic items in the name of Maldives - 10 more sheetlets, each containing 4 different stamps and each with an accompanying miniature sheet. The date of issue is given as 5 March 2014 and the subjects depicted in this outpouring (none of which seem to have any relevance to Maldives itself) are:- 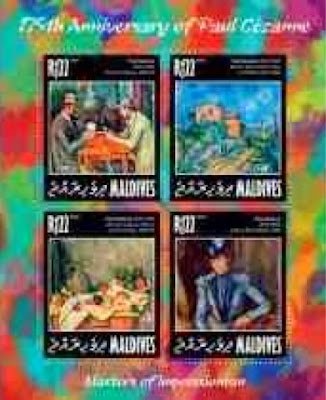 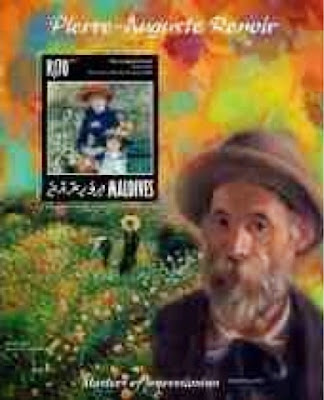