Australia Post is planning to issue an average of 1 set of stamps every week in the coming months. The forthcoming new issue programme is as follows:-
24 June 2014 - issue inscribed Cocos (Keeling) Island - Maps of Cocos Islands;
1 July 2014 - Centenary of the First Airmail;
8 July 2014 - Royal visit;
15 July 2014 - Equestrian events;
22 July 2014 - Joint issue with Norfolk Island;
5 August 2014 - Centenary of Military aviation and submarines;
12 August 2014 - issue inscribed Christmas Island - Crab migration;
19 August 2014 - Nostalgic advertisements;
26 August 2014 - The Southern Lights.
Collectors will draw their own conclusions as to whether the release of so many issues in such a short time frame is or is not excessive. Clearly some of the planned issues commemorate significant events and anniversaries while it is difficult to see the need for some of the others. No doubt too, most of the issues will be released in multiple formats - gummed, self-adhesive from booklets and sheetlets, self-adhesive from coils, miniature sheets and so on and so on. Some might think that collecting Australian stamps produced by Australia Post has reached the same level as collecting Solomon Islands stamps produced by Stamperija. 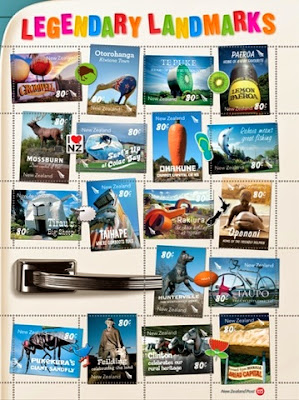 Those who plan New Zealand's new issue programme for some reason known only to themselves seem to feel it necessary to produce a large sheetlet of about different 20 stamps every year. 2014 is no exception and the theme for this year's issue is town landmarks, some of which admittedly are quite amusing. The designs are by Graeme Mowday and Tim Christie and printing is in lithography by Southern Colour Print. The date of issue will be 2 July 2014.
Niue will issue a set of 4 stamps and 1 miniature sheet which feature local fish on 18 June 2014. The stamps were designed by New Zealand Post and lithographed by the Collectables And Solutions Centre, Whanganui:- 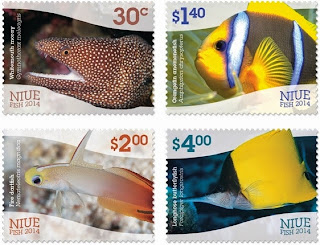 Also on 18 June 2014, Tokelau will release 4 stamps and 1 miniature sheet on the subject of vaka, sea-going canoes. These stamps were also designed by New Zealand Post and lithographed at Whanganui:- 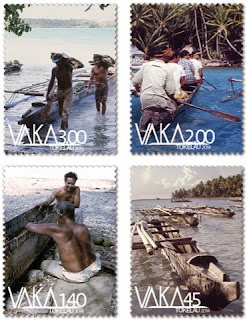 Pitcairn Island will issue 6 stamps on 12 June 2014 which depict local flora. The stamps were designed by Sue Wickison and lithographed by Southern Colour Print. The publicity for this issue tells us that the island is home to 81 species of flora of which 10 species are endemic:- 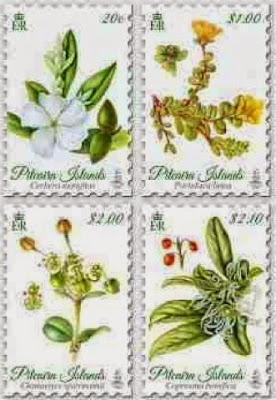 Malta will issue 1 miniature sheet on 12 June 2012 to commemorate the FIFA World Cup Finals (see Blog 420) which will begin in Brazil on that date:- 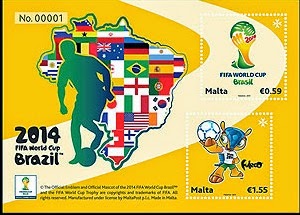 In Blog 418 I noted the issue of the "Euro 20g World 10g" mixed value Post and Go stamp and I have now revisited the new NCR machines in Birmingham's main post office off Victoria Square and have obtained an example of the new stamp on Machin Head MA13 paper:-