In recent years many stamps have been issued by or on behalf of various Commonwealth postal administrations which illustrate the leaders of the Roman Catholic Church and commemorate numerous Papal events, frequently of no direct relevance to the country whose name appears on the stamp. In Blog 216 which coincided with the election of Pope Francis, I illustrated some stamps from Commonwealth countries which depicted the various Popes who have occupied the See of Rome since 1900. Of equal relevance as the leader of the Roman Catholic Church to many Commonwealth countries is the most senior cleric in the Anglican Church, The Archbishop of Canterbury. There have been a number of stamps issued in recent years which commemorate the men who have occupied that post and I illustrate them below.
The first Archbishop of Canterbury was Augustine, an Italian monk sent by Pope Gregory The Great to convert the people of Kent to Christianity. He arrived in 597 AD and founded a church at Canterbury where, after a short time, Aethelbert the King of Kent was baptised and he was followed by many of his people. Augustine founded 2 more sees at Rochester and London in 604 but died on 26 May 606 and was succeeded by another Italian, Laurentius. There was no native English Archbishop of Canterbury until 655 when Deusdedit (Frithine) became the sixth Archbishop of Canterbury. Augustine was depicted on 2 stamps issued by Royal Mail on 11 March 1997, the 43p also including a depiction of the Kentish king, Aethelbert.

We move on to the period after the Norman conquest of England and the reign of Henry II. In 1162, Thomas Becket, Henry's Chancellor and a former protege of the previous Archbishop of Canterbury, Theobald of Bec, was appointed as the new Archbishop. However, eventually a running dispute began  between the king and primate and eventually, in December 1170, four of Henry's knights murdered Becket inside the cathedral at Canterbury, Henry having been said to have asked "Who will rid me of this turbulent priest?" The king paid penance for the murder and Becket was made a saint and his shrine at Canterbury became a great site of pilgrimage in the middle ages. Becket's murder is featured on a stamp issued by Tristan Da Cunha on 15 January 2010 and King Henry was depicted on a stamp issued by Barbuda on 15 April 1970:-

Another unfortunate Primate who met a bloody end was Archbishop Simon Sudbury who took up the post on 4 May 1375 and was the leader of the Church during the reign of King Richard II (illustrated above on one of the Barbuda Kings and Queens set which was issued on 1 August 1970) - he suffered the fate of being beheaded by rebels on 14 June 1381 during the Peasants Revolt. The revolt itself was featured on a stamp issued by Tristan Da Cunha on 15 January 2010 and the stamps show the boy king Richard on horseback facing down the rebels with the city of London in the background:-

We move forward to the reign of Henry VIII who had grown tired of waiting for his first wife, Catherine of Aragon, to produce a male heir to the English throne and thus secure the future of the Tudor dynasty. He had developed a passion for a woman called Anne Boleyn and resolved to marry her but it was first necessary to have his marriage to Catherine annulled, something which the Pope would not allow him to do. In 1532, a reformist priest, Thomas Cranmer, was appointed to be Archbishop of Canterbury. In 1533, a court established by Cranmer ruled that the marriage between Henry and Katherine was against the laws of God because Katherine had first been married to Henry's teenage brother, Arthur, and the marriage was annulled. Cranmer worked to reform the Church in England and eventually it broke with Rome and Henry VIII became the Head of The Church Of England.

Henry was succeeded by his 9 year old son, Edward VI, who was a fervent Protestant and great reforms in The Church continued. Cranmer made a significant contribution to the preparation of The Book Of Common Prayer which was published in 1549. However, Edward VI died in 1553 and eventually his Catholic sister, Mary known as "Bloody Mary", managed to seize the throne and Cranmer's fate was sealed. He was arrested for treason later in 1553 and deprived of the Archbishopric by Rome in December 1555. He was first imprisoned in the Tower Of London and later in Oxford where he eventually recanted of his Protestant beliefs.

However, Mary's vicious regime condemned the 66 year old man to be burned at the stake and this was carried out on 21 March 1556 although Cranmer rejected his recantations and plunged his right hand into the flames first because that had been the part of his body which had signed the recantation. Mary's vengeful triumph was complete but did not last long as she herself died 2 years later and was succeeded by her Protestant sister, Elizabeth I.


John Bancroft was Archbishop of Canterbury from 1604 to 1610 and he was the chief mover of The Authorised Version of The Bible which was published in 1611 and is often known as the King James Bible. A rather poor rendition of King James holding the new Bible was depicted on one of the Millenium Christmas stamps issued by Great Britain in December 1999:-

Yet another Archbishop Of Canterbury to meet a grisly end was William Laud who was appointed as Archbishop in 1633 during the reign of Charles I. The puritans feared that Laud was sympathetic to the restoration of Catholicism and eventually had him arrested and had him put on trial. They failed to convict him and condemned him by an Act of Attainder and finally succeeded in having him beheaded in 1645, just 4 years before the King himself was to suffer a similar fate at the hands of Parliament.

We move ahead in to the 20th century. Archbishop Cosmo Lang played an important role in bringing about the abdication of King Edward VIII in 1936. Lang was dismayed at the new king's evident determination to marry the American divorcee, Wallis Simpson, and, greatly due to the intervention of Archbishop Lang, Edward VIII eventually abdicated on 11 December 1936. Shortly afterwards Lang broadcast a speech in which he said about the former king, "From God he received a sacred and high trust. Yet by his own will he has....surrendered the trust" and that Edward had had a "craving for private happiness" which he had sought "in a manner inconsistent with the Christian principles of marriage". The speech shocked the British public and was widely condemned for its lack of charity and was said to have dealt "a disastrous blow to religious feeling throughout the country".
Although there has been no philatelic depiction of Archbishop Lang, King Edward VIII has appeared on a number of stamps including 4 definitive stamps issued by Great Britain in 1936 and a more recent British stamp issued on 2 February 2012 which was part of a set of 5 stamps which depicted British monarchs of the Houses Of Windsor and Saxe-Coburg-Gotha. 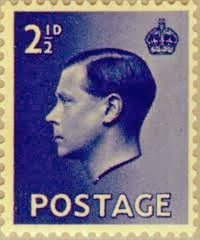 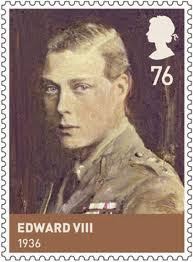 I was also unable to resist reillustrating one of the hilarious stamps from Guyana which were issued in 2012 which depict not Edward VIII but Edward XIII. It appears that Cosmo Lang was responsible for causing the deposition of 2 King Edwards rather than one if the Guyana Post Office is to be believed or  more likely the designers who work for the large New York agency which produced these items just don't understand Roman numerals!:- 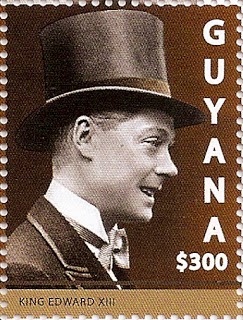 Cosmo Lang was succeeded by William Temple in 1942 and he by Geoffrey Fisher (1882-1972) in 1945. He appears on a number of Commonwealth stamps because he was the Archbishop of Canterbury who crowned Queen Elizabeth II at her coronation on 2 June 1953. Royal Mail depicted Archbishop Fisher standing to the left of the Queen on 1 of 10 stamps issued in 2003 to commemorate the 50th anniversary of the Coronation. Other scenes of the Coronation in which Archbishop Fisher appears were also released by a number of other Commonwelth territories including Dominica and Pitcairn on the occasion of the 25th anniversary of the event:- 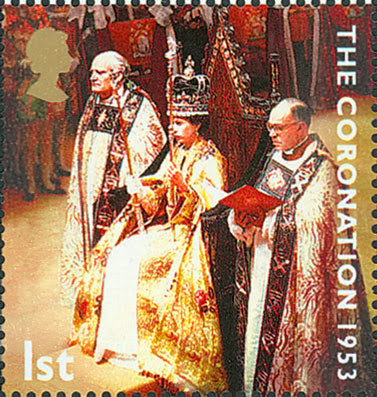 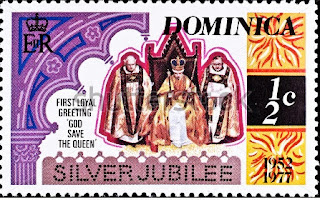 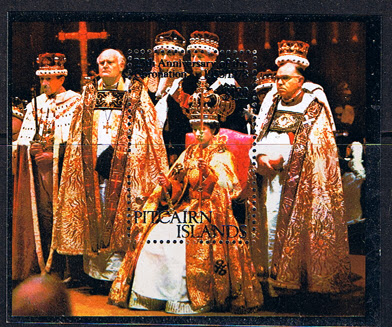 Archbishop Fisher retired from the primacy in 1961 and was succeeded by Michael Ramsey who also appears on the above stamps but standing to the Queen's right (at the time of the coronation Ramsey was Bishop of Durham and then was made Archbishop Of York in 1956 and subsequently Archbishop Of Canterbury). Archbishop Ramsey was succeeded by Donald Coggan in 1974 and he in turn by Robert Runcie in early 1980. A set of stamps issued by Ghana on 3 March 1981 depicts Archbishop Runcie sitting with President Hilla Limmann and Pope John Paul II during the Papal visit to Ghana which took place from 8 to 10 May 1980 and when the newly appointed Archbishop was also visiting that country:- 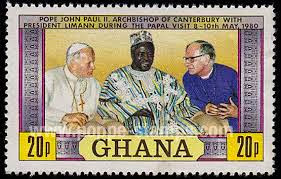 Subsequently, Belize issued a pair of stamps on 8 March 1984 to commemorate the visit of Archbishop Runcie to that country although the issue consisted of overprinted definitives rather than a portrait of the primate and did not even give the Archbishop's name:-

Archbishop Runcie was succeeded by George Carey in 1991 and 2 portraits of him were featured on stamps of Seychelles issued on 18 June 1993 to commemorate the Archbishop's visit to the islands:-

Carey was succeeded by Rowan Williams in 2002 but I am not aware of any stamps having been issued which featured him (see addendum at the end of this piece) but his successor, Justin Welby, who became Archbishop in February 2013, has already made a philatelic appearance - on a label attached to a 2013 Christmas stamp issued by Tristan Da Cunha on 18 November 2013. The stamp itself depicts Canterbury Cathedral:-

The portrait of Archbishop Welby featured on the label shows how remarkably he resembles Archbishop Carey as depicted on the Seychelles stamps depicted above.

Addendum - The 104th Archbishop Of Canterbury, Dr. Rowan Williams, finally made an appearance on a Commonwealth stamp when Zambia depicted him meeting the former President of Zambia, Dr. Kenneth Kaunda, on one of the stamps included in a miniature sheet of five which was released on 23 October 2014 to commemorate the 50th anniversary of Zambia's independence. The photograph used in the design was taken in April 2011 when the Archbishop made his first visit to Zambia:-