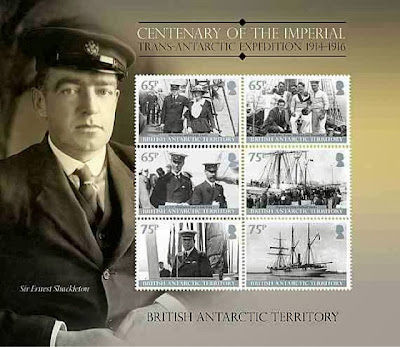 Thirty eight new stamps were issued by The British Antarctic Territory on 27 November 2013. A sheetlet containing 6 different stamps was released to commemorate the centenary of the Imperial Trans-Antarctic Expedition (cost: £4.20p) (shown above). Eight stamps depicting the ever-popular subject of penguins were also issued (cost of set: £5.70):- 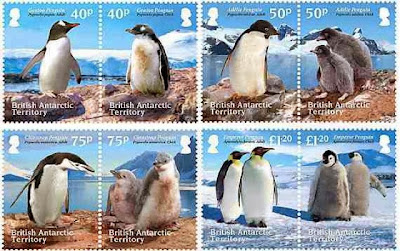 And finally, 16 stamps were issued on the 50th anniversary of the first British Antarctic Territory stamp issue which appear to do nothing more but reproduce the original stamps and sell them at a much higher face value than the original set - the price of all 16 being £17.28p due to the presence of £5, £3.50 and £2 values in the set. 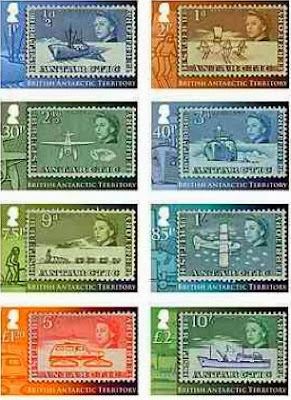 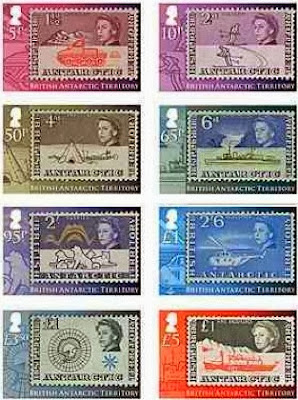 The total cost of a single day's issue is therefore £34.38p which admittedly probably represents a whole year's issues but comes as rather a body blow to a BAT collector when delivered in one fell swoop (I understand why the Territory has a very limited time space to release all its issues but by the time the stamp dealer's profit and costs as well as VAT are added to the face value this represents a large outlay by the stamp collector in a single purchase).
Maybe I'm reading a little too much into this but I note that the date of issue was only 2 days before the close of tenders for taking on the role of philatelic agents for the territory (see Blog 324) so perhaps CASCO, the current agents, put out a lot of expensive stuff, with the Territory's Administrator's agreement no doubt, to prove that they still CAN contribute a lot of money to the Territory's finances by the production and sale of postage stamps and thus make them more attractive as the agency to have their contract renewed; intriguing isn't it?

Other issues just released or about to be released by CASCO/Harry Allen (I do not yet know exact dates of issue because CASCO's promotional information to collectors is, frankly, very poor) are:-