Following on from last year's "Pop Up" (what a horrible term) Post Office in Camden in London, Royal Mail have repeated the exercise but instead of picking one location for the Pop Up Post Office to appear in, this year the "Christmas Stamp Shop" has been travelling the length of Great Britain selling its wares. In fact, there has been very little for the stamp buying public to purchase apart from Christmas Robins and 2nd class "Machin" "Post And Go" stamps from Hytech machines A3 and A4 (depicted below) and special "Smilers" stamps. For the latter, members of the Pop Up Post Office staff took customers' photographs with what looked like an I Pad and the photographs were then used on labels printed on site which were attached to 2013 Christmas stamps. The Smilers stamps seemed to be popular with members of the general public but the "Post And Go" stamps seemed to be mainly bought by stamp collectors.

The Pop Up Post Office started its tour in Newcastle on 20 and 21 November and then crossed the border into Scotland to be in Glasgow on 23 and 24 November. The Robin stamps with security codes MA12 and MA13 appear to have been sold in both of these locations as also happened in Liverpool which was visited by the post office on 29 and 30 of November and 1 December. The Post Office next appeared in Great Britain's Second City, Birmingham, on 5 and 6 December and I visited it on its second day in that city.
The Travelling Post Office was sited in a busy shopping area (shown above) with many banks and stores close by and many people using various cash machines so that the "Post And Go" machines were severely interfered with by the surrounding devices and since they could only take card payments and not cash, it took approximately half an hour and multiple attempts to persuade the Hytech machines to accept payment for the Post And Go stamps which I wanted to buy  (just a single "Collectors" set of the Robins stamps and 1 each of the 2nd Class stamps). It did not seem a very cost effective way to sell stamps, both in time and money, given that there were quite a number of Royal mail employees involved in the Pop Up Post Office. No doubt it gave some publicity for Royal Mail and a number of people were pleased to buy Smilers stamps. My Robins stamps had the MA13 security code so at least the time I spent trying to obtain the items was rewarded by a new set of stamps for my collection.
After Birmingham, the post office moves on to Cardiff (7 and 8 December), Croydon (11 and 12 December), Covent Garden (13 and 14 December) and London Westfield (17 to 19 December).

The Travelling Post Office staff were also handing out brochures which on one side publicised Christmas last posting dates and on the other, as shown below, detailed the nearest post offices in central Birmingham. The head post office, location 2, situated in Pinfold Street and opening on to Birmingham's magnificent Victoria square, has a number of Post And Go Wincour machines which sell a range of different Post And Go stamps although I have not yet been able to obtain the Wincour version of the MA13 Christmas robins stamps from there:- 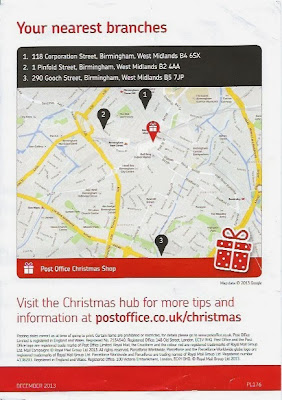 The isle Of Man Post Office has given details of its first issues of 2014. the first set will be released on   6 January 2013 and consists of 8 stamps on the theme of "Isle Of Man Isle Of Culture". The interesting stamps depict paintings by the Manx local artist, Juan Moore, which illustrate various forms of culture and which are inscribed both in Manx and English:- 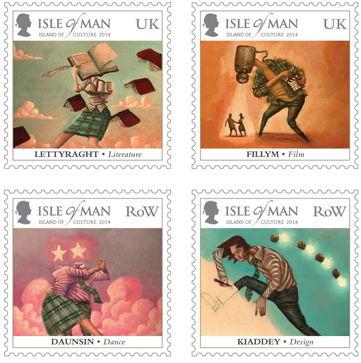 There will also be a miniature sheet issued on the same day which illustrates the subject of winter flora and is designed by another Manx artist, Catherine James:- 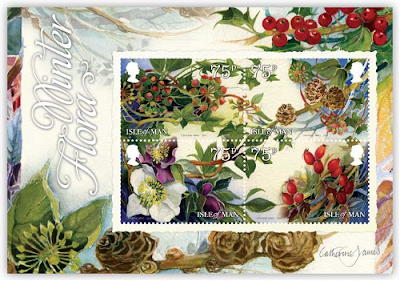 Finally, news from South Africa of a miniature sheet which was released on 25 October 2013 to commemorate the 20th anniversary of diplomatic relations between South Africa and Mexico. The item was designed by Thea Clemens and lithographed by Lowe Martin:- 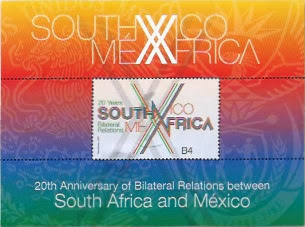