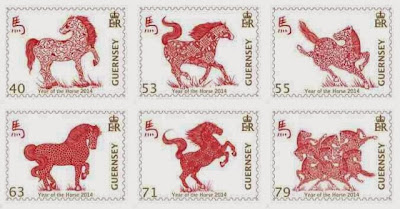 On 6 January 2014, the tiny Channel island of Guernsey will issue a set of 6 stamps and 1 miniature sheet to commemorate the lunar new year which will be The Year Of The Horse. It is difficult to understand what the relevance of the subject matter is to this small Western European territory and it only seems possible to think that sales of stamps to its traditional customer base in Europe and North America must have fallen so greatly that the territory's postal administration feels it necessary to try to boost its sales by identifying with Far Eastern themes to appeal to the philatelic market in that part of the world.
This is where I part company with my Guernsey stamp collection. From this issue, which I shall not buy, onwards I shall only buy stamps which have the strictest local relevance to the island (this also applies to its philatelic appendage Alderney) and I shall merely make little footnotes in my collection about what I choose not to collect. I fear that even if the Guernsey Philatelic Bureau does succeed in increasing sales in the Far East, large sets and added miniature sheets as shown above and below can only cause it to lose more of its traditional customers.
For the record, this issue was designed by Chrissy Lau and printed in lithography by Lowe Martin:- 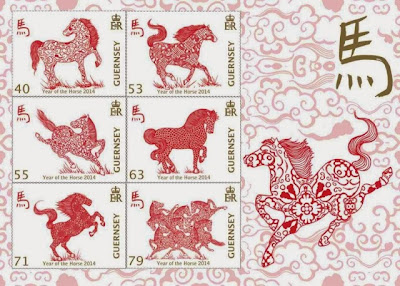 I have previously mentioned that from 2014 because of continuing excessive stamp issues I shall treat new issues from Jersey similarly and only buy stamps from that territory which have a strictly locally relevant subject matter. The first issue of 2014 certainly does have local relevance so it will be finding its way into my collection. On 7 January 2014 Jersey will issue 6 stamps, designed by Nick Shewring, on the subject of local architecture and depicting local manor houses.
Meanwhile New Zealand Post will also present collectors with a set of 4 stamps and 1 miniature sheet on 8 January 2013 to mark the Year Of The Horse. The issue was designed by Asiaworks and lithographed by Cartor:- 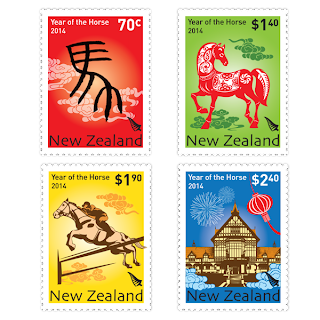 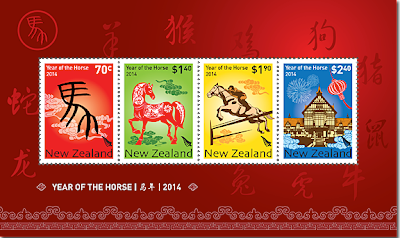 On 9 October 2013 Brunei Darussalam issued a set of 3 stamps and 1 expensive miniature sheet (face value of $23) to commemorate the holding of the ASEAN Summit in Brunei. As depicted below, the 3 $1 stamps were printed se-tenant in sheetlets of 15 stamps (5 strips of 3 different designs). A booklet containing a set of stamps was also issued.
Brunei also issued a second set of 3 stamps and 1 miniature sheet in its Butterfly series on 28 February 2013. 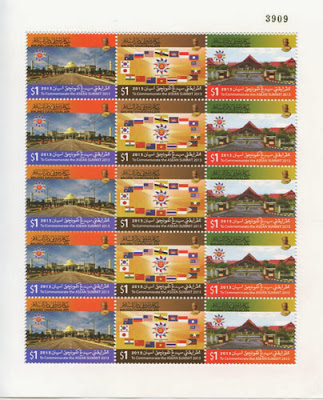 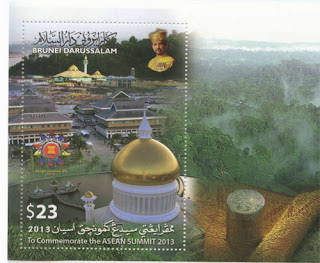