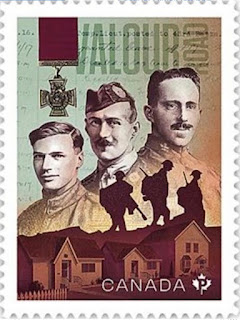 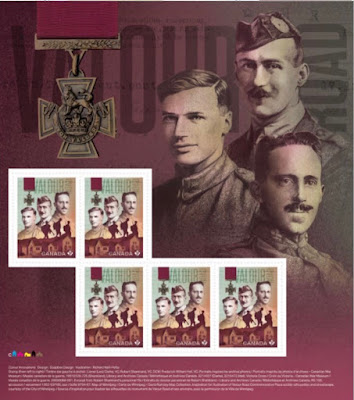 🇨🇦 Canada Post issued a single self-adhesive stamp produced in booklets of 10 along with a gummed miniature sheet containing five examples of the stamp on 21 October 2021 to commemorate three Canadian military figures who were awarded the Victoria Cross during the First World War. The issue was designed by Soapbox Design. Rating:- ****.

🇹🇹 TT Post, the postal service of Trinidad And Tobago, issued a booklet of 10 circular self-adhesive stamps on 16 October 2021. The stamps depict various dishes to celebrate the theme of ‘Authentic cuisine Trinidad and Tobago’ and the issue was released on World Food Day. The rather poor quality illustration is taken from a Facebook page post of the launch of the issue in which most often photographs featured large numbers of government ministers and officials all trying to get in the act but the stamps were largely ignored while the poor designer of the issue did not get a mention. Rating:- *****. 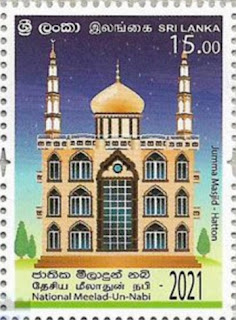 🇯🇪 One of the six Jersey Post Post and Go ‘250th anniversary of the Jersey corn riots’ issue mentioned in Blog 1942 is depicted below. The issue was originally said to have involved adding a relevant inscription to the Lighthouses issue but the design featured on the Jersey Stamps and Collectables internet site suggests that the stamps finally appeared with the inscription applied to The Jersey Arms set. The day of issue was 28 September 2021.