🇬🇸 The postal service of South Georgia And The South Sandwich Islands will issue an as usual interesting and attractive set of 6 stamps on 28 October 2021 on the subject of the individual islands of Southern Thule, the most southerly group of islands of the territory. Southern Thule was discovered by Captain James Cook in 1775 and visited again by Fabian Gottlieb Von Bellinghausen in 1920. This issue features a view of each island and a picture of a bird species of  each island - the islands being Bellingshausen Island, Cook Island and Thule Island and the issue is in the format of three horizontal se-tenant pairs. The stamps were designed by Bee Design from photographs by Andy Black, Tom Hart/Penguin Watch and Gemma Clucas and were lithographed by Cartor and are perforated 13.5. Rating:- *****.

🇰🇾 On 16 September 2021 the postal service of Cayman Islands released its first issue of 2021 in the form of a single stamp to commemorate the 25th anniversary of the Cayman Islands Cancer Society. Rating:- ****. 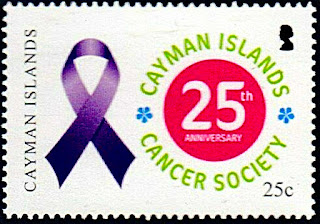 🇯🇲 An announcement on Facebook confirmed that Jamaica Post will issue shortly a set of stamps to commemorate the 350th anniversary of the establishment of the Jamaican postal service. 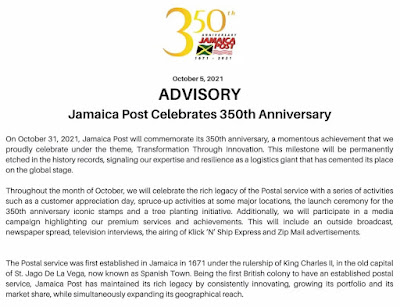