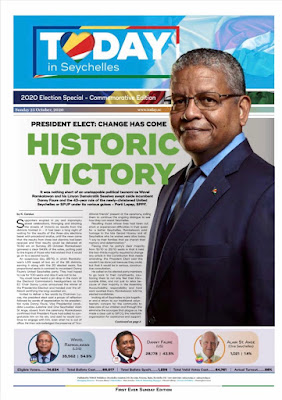 🇸🇨 Seychelles has been ruled by one political party in its various guises since 1977 when France Albert René overthrew the then recently independent country’s first president, Sir James Mancham, while he was out of the country attending the Commonwealth Heads Of Government Conference in London which was taking place during the celebrations to commemorate Queen Elizabeth II’s Silver Jubilee. These events and their philatelic consequences are detailed in the Blog of 4 June 2012. 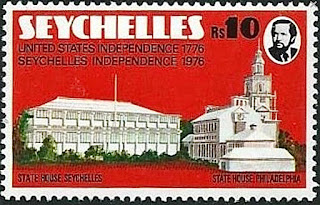 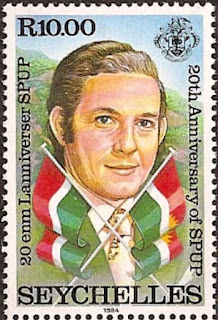 As the previous Blog describes the immediate philatelic effect of René’s coup was to prevent the use of Mancham’s portrait on Seychellois stamps and more importantly to put an end to IGPC’s involvement in Seychelles new stamp issues. A fresh danger arose when the notorious Philatelists Ltd (later Philatelic Disribution Company Ltd) was appointed as philatelic agents for the Seychelles postal service but those who ran the Seychellois mail service were wise enough to never allow the company to produce the extreme horrors such as the Leaders Of The World thematic series in the mid-1980s that other less perspicacious postal services allowed to be released.Who knows we might have had issues for individual islands such as Farquhar and Desroches depicting classic motor cars or old steam locomotives as we did from Tuvalu. Unfortunately however the Seychelles postal service did succumb to allowing separate stamps being released for the Seychelles Outer Islands (Zil Elwanyen Sesel [spelt in 3 different ways]) which continued to appear for the several years during which Philatelists Ltd oversaw Seychelles stamps but the stamps were generally innocuous and usually relevant to the territory and even quite attractive and so not a great deal of harm was done. After the fall of Philatelists Ltd, the Seychelles postal service turned to the Crown Agents to help it with its stamp issues. This became CASCO and, if I remember rightly, CAPHCO, and the subject of issues were often irrelevant to the country and more numerous so that by 2009 stamps were appearing with the name of Seychelles printed on them that depicted European Explorers such as Sir Martin Frobisher and Sir John Franklin who were connected with North America and the Arctic rather than the Indian Ocean. 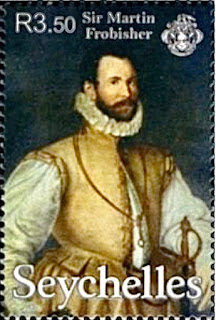 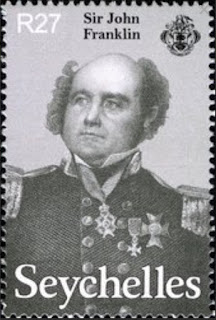 Fortunately this phase of new issues came to a rapid end and again less harm was done to the philatelic reputation of Seychelles than was the case with some other territories. Since 2010 the Seychelles postal service has had an excruciatingly conservative  new issue policy with most years seeing no new stamps or just one stamp being released. In many ways this a great pity as there are many interesting subjects which could be featured on the stamps of Seychelles including its unique and fascinating wildlife, both avian and marine.

So as the long period of rule by René and his successors (James Michel [2004-16] and Danny Faure [2016-20]) comes to an end with the defeat of Faure in the recently held Presidential election the results of which have just been announced, stamp collectors might wonder if the new administration under Wavel Ramkalawan, the newly elected President of the Linyon Demokratik Seselwa Party, might take a fresh look at the new stamp issues of Seychelles and abandon the present ultra-conservative new issue policy. I would welcome a slight increase in the number of new stamps being issued by the interesting and beautiful country and the change of a political administration is quite frequently associated with a change of approach to the issuing of stamps. We can only hope that if a new administration sees benefits in increasing the number of new issues it does not see there being advantages in returning, after all these years, to using the services of IGPC or even mor terrifyingly, Stamperija. If this article ever comes to the attention of anyone associated with the new Seychelles regime or postal service, which is admittedly unlikely, could I mention the words Pobjoy Stamps/Creative Direction?