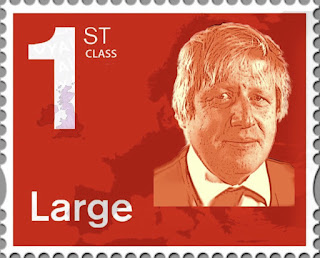 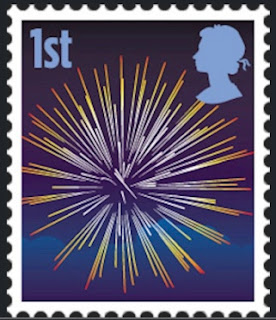 Over the centuries England/Great Britain/United Kingdom has staged a number of Brexits as detailed in Blog 780 though this is the first one to have been actually referred to as ‘Brexit’.
At the European witching hour of midnight, but at only 11PM in the British Isles, on 31 January 2020 The United Kingdom became the first country ever to leave The European Union. There had been a great deal of fuss over the previous 2 or 3 years about the need to issue a postage stamp to commemorate the event and many hilarious possible designs were suggested (see above and also Blog 1138) but Royal Mail stood fast and declined to release such an issue though the Royal Mint did produce a 50p commemorative coin to take note of the event at the British government’s bidding. 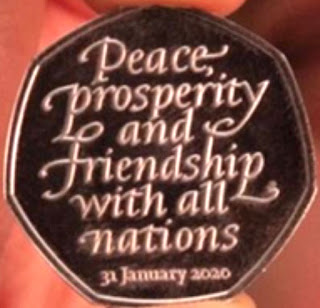 In recent years the Royal Mint has proven itself rather more open to commemorating significant British historical anniversaries and events than has Royal Mail which prefers to feature modern cultural icons, not necessarily British, on its collectable products (The Gruffalo, Peppa Pig, Elton John, Chewbacca, Harry Potter, David Bowie and Jon Snow [No, not the Channel 4 newsreader]). Issuing coins is obviously just as precarious an action to take as issuing stamps when it comes to facing criticism if the new coin is anything to go by. The noted author, Sir Phillip Pullman, has demanded that all ‘literate’ members of the public boycott the new coin because there is a comma missing after the word ‘Prosperity’ (the so-called ‘Oxford comma’) on the reverse of the coin though it’s likely that his call to boycott the coin has more to do with his well-publicised anti-Brexit political views than his desire to see precise grammar on the back of our coinage. His (re-) moans have been termed the ‘Pedant’s revolt’.
Perhaps it is fair that a Brexit coin should be issued as a Brentry 50p coin was released in 1973 as depicted below. The reverse shows 9 hands linked in a mutually reassuring way representing the then 9 members of what was called the ‘Common Market’ or the European Economic Community. This was to become the European Community and then the European Union and this ‘ever closer Union’ was too much for those in Britain who wanted easy trade with Europe but not to be a part of a European superstate, a sort of modern Holy Roman Empire. Which brings us to where we are today.
On the subject of UK coins linked to membership of the European Union there were subsequently two further 50p coins released by Royal Mint. In 1992 and 1993 a coin commemorated the United Kingdom’s Presidency of the Council of Ministers and the completion of the Single European market. A further 50p coin was released in 1998 to once more commemorate the UK’s Presidency of the European Union and to also mark the 25th anniversary of The United Kingdom’s membership of the Common Market. 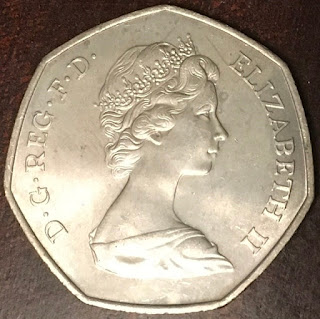 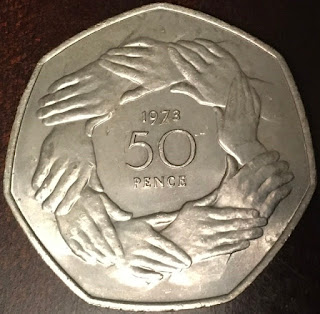 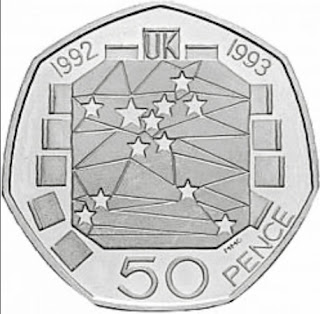 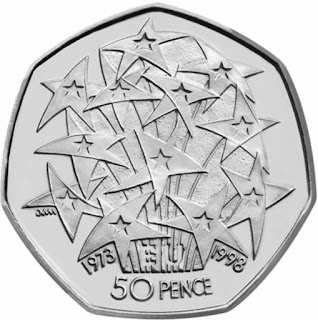 And of course there were also Brentry stamps. The various issues from the British postal service relating to the United Kingdom’s membership of the European Communities/Union are featured in Blog 780 but it is worth showing here again the 3 stamps which were issued on 3 January 1973 to commemorate Britain’s entry into the Communities. The stamps were designed by Peter Murdoch and printed in photogravure by Harrison. The Union Jack was depicted as one part of a 9 piece jigsaw (actually it was only an eight and half piece jigsaw but which country was the half piece was never revealed - as it turns out it was probably Britain). 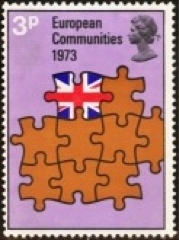 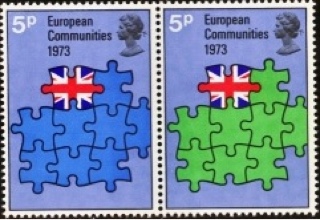 With the departure of the United Kingdom from the European Union, two member states of The Commonwealth remain members of the European organisation Malta and Cyprus (both joined in 2004) so anyone who collects Commonwealth stamps can still keep up with events in the EU as reflected by stamps. So that’s alright then. 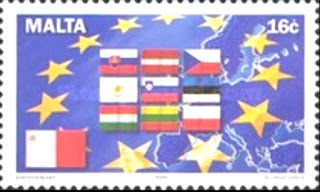 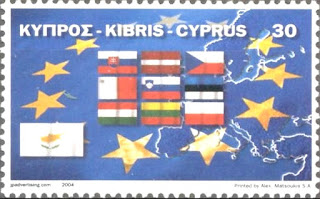