🇬🇧 As mentioned in Blog 1512 the Postal Museum in London is holding a special exhibition titled ‘The Great Train Robbery:Crime And The Post’ marking the 50th anniversary of the notorious Great Train Robbery in which criminals robbed the mail train from Glasgow to London making off with £2.6 million which was a record sum at the time and also leaving the train driver, Jack Mills, with a life-changing head injury after they had assaulted him with a metal bar.
As part of the exhibition the Postal Museum had planned to issue a pack containing 6 ‘Mail By Train’ Post and Go stamps sold for a remarkably high price of £18 with the stamps having the additional inscription ‘Great Train Robbery’.
In Blog 1512 I raised the question of whether or not this inscription was appropriate or whether it could be viewed as glamorising this huge and violent crime. I know Royal Mail will issue stamps on almost any trendy subject nowadays but commemorating a crime may be one step too far.
It may be that someone at Royal Mail glances at Commonwealth Stamps Opinion from time to time as the Postal Museum has now revealed that the stamps do not now have the originally intended inscription but the much safer but not terribly informative ‘The Postal Museum/New exhibit 2019’ and that Royal Mail had asked for the inscription to be changed. A wise decision I think. The only question now is “Is it wise to spend £18 on a strip of Post and Go stamps?” 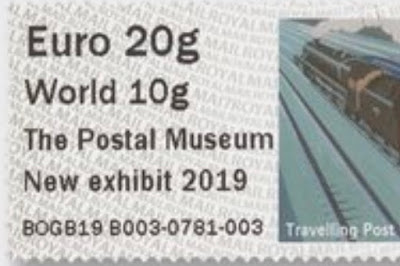 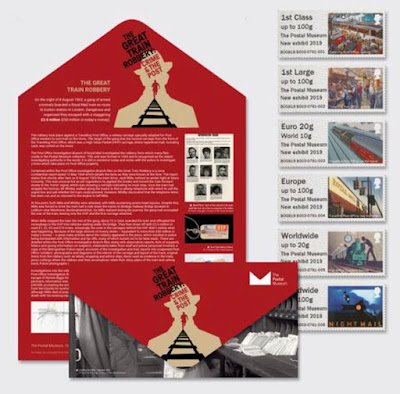