🇲🇺 Mauritius Post issued a single stamp on 30 April 2019 to commemorate the 50th anniversary of the establishment of diplomatic relations between Mauritius and Japan. An interesting design depicts the recently completed radar station at Trou Aux Cerfs which was built in co-operation with the government of Japan which had been planned since 2002 with the need for it being emphasised by fatal flooding in Port Louis in March 2019. Rating:- *****. 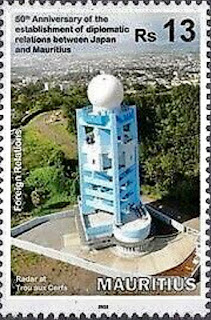 🇳🇬 The postal service of Nigeria issued a pair of stamps on 25 April 2019 to commemorate the holding of the African Drum Festival in Ogun State. The two values are N50 and N100 and do not have holograms attached to them. There is no accompanying miniature sheet. Currently there is no illustration available apart from one which depicts part of the stamps so we will have to make do with that for the moment. The parts we can see suggest that the quality of design is no better than we have come to expect from the majority of recent Nigerian stamps. Rating:- **

🇨🇾 Cyprus Post will issue 2 stamps on 2 May 2019 as its contribution to the 2019 Europa omnibus issue the subject of which is ‘National Birds’. The two depicted birds are both birds of prey, a subject which has already been depicted a number of times on stamps of Commonwealth territories in recent months including Royal Mail and the South Pacific philatelic entities which are clients of the agency Philatelic Collector Inc. Rating:- *****. 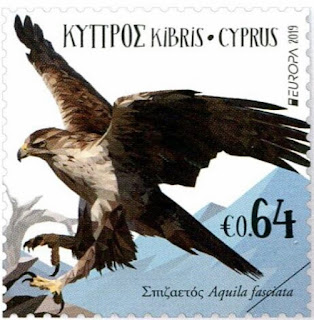 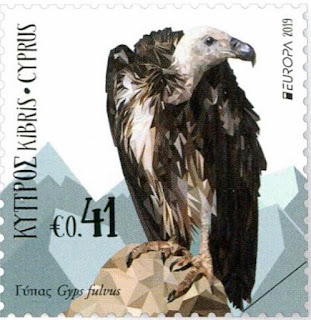 🇲🇹 MaltaPost has released news of one of the dullest pair of stamps to be offered for sale this year. The issue will commemorate the 70th anniversary of the Council Of Europe which is a not particularly significant anniversary and the design stamps adds nothing to the uninteresting subject matter. The stamps were printed in lithography by, I assume, Printex. Rating:- *. 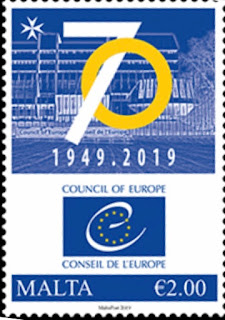 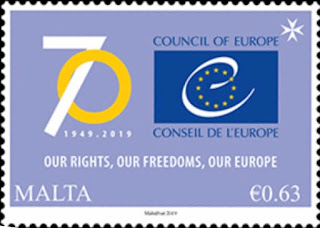