🇬🇸 The postal service of South Georgia And The South Sandwich Islands is planning to issue something of a departure from its usual rather conservative stamps when it releases a set of 4 stamps on 10 May 2019 titled '3D Grytviken'. The set commemorates the work by the New Zealand-based company, Geometria, which has employed laser scanning technology, photogrammetry and drone footage to map systematically the old whaling stations in the territory which resulted in the capturing in 3D the surfaces of the buildings in highly detailed images. The designs of the stamps use some of the 3D datasets obtained during the study in anaglyph 3D and red-cyan anaglyph glasses are required to view the 3D images.
I will hold back my judgement of this issue until I see the actual stamps and have managed to track down a pair of the special glasses.
The issue was designed by Bee Design images supplied by Geometria Ltd and lithographed by Cartor and perforated 13.5. 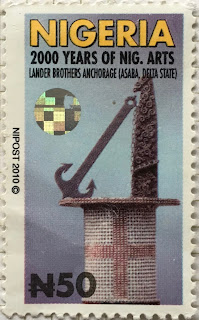 🇳🇬 There's little doubt that collecting newly issued stamps from many Commonwealth countries in these present times is quite a lot more difficult than when I was relative youth in the 1970s. Firstly there's the problem of severely excessive numbers of issues being released from many philatelic entities from the once mighty Royal Mail and Australia Post down to the down-in-the-gutter philatelic agencies whose names are all too familiar to informed collectors. The vast flood of these often poorly produced and irrelevant philatelic items swilling over the philatelic market as they do would be near-impossible for collectors to accumulate in its totality on the basis of financial cost let alone the good taste involved in avoiding so much of such philatelic tat.
Then there are the joint matters of finding out what has been issued and once one knows about them of how to obtain them. There are the agency stamps which are easily found out about and almost as easily obtained from the agents who would not wish to put barriers in the way of collectors and their purchasing since most of the profits of the stamp sales end up in the agencies' pockets. The problem with that is that the stamps sold by the down-in-the-gutter agencies are usually ones that never actually make it to the post offices of the countries whose names are printed on the stamps. What collector of postage stamps would want to buy stamps which are never available to use as a receipt for postage paid which after all, is the true function of a stamp?
News of certain sorts of stamps is often excruciatingly difficult to obtain and sometimes collectors become aware of such issues several years after some post offices have put them on sale solely to local mail senders for use on their letters and parcels. Some of these stamps are locally surcharged due to alterations in postage. These items are often never handled by philatelic agencies and so collectors must find a source in those countries both for news of new stamps and as a source of supply of such items. What a contrast with the situation which existed in the Seventies when a single new issue dealer was able to supply me with every Commonwealth stamp which appeared on the market usually quite soon after they were issued in the country of origin.
Few geographical regions of The Commonwealth pose as many problems in learning news of and obtaining new issues as does West Africa. New stamps from Cameroon are infrequent and it is not easy to find out information about what does actually appear. Sierra Leone and The Gambia are in the hands of some of the more despicable philatelic agencies and anything that appears on the market with their names printed on them is likely to have little to do with the countries themselves and to be ridiculously expensive. Ghana from time to time allows a gutter foreign philatelic agency to issue philatelic items on its behalf but more recently has produced locally one or two issues as well as intermittent surcharges all of which do not appear to be sold freely to collectors and therefore are a nightmare to track down - they are most easily found in a used state in packets of kiloware.
And then there's Nipost, the postal service of Nigeria, which for decades has issued locally produced stamps. Its designs are frequently extraordinarily naive and poorly printed but there's no doubt that they are real postage stamps. Publicity about new issues to collectors is usually non-existent and it is often very difficult to obtain new issues even when one knows about their existence. But in some ways these problems make life more interesting and it's always satisfying to obtain one of the country's  issues in view of the challenges which collecting Nigerian new issues raises.
An example is the N50 'Lander Brothers Anchorage' stamp which has now appeared in 4 different forms. The first version in my collection dates back to 2009 and has the inscription '2000 Years Of Nig. Art' with the country name printed in yellow, the value in black and there is no hologram. A similar stamp with a hologram, country name in pale yellow and value in yellow was issued as part of a set of 9 stamps in 2010. A third version, again with a hologram, and with the country name in black, value in brown and no inscription reading '2000 Years Of Nig. Arts' appeared later and I have now obtained a fourth version (shown above) which is similar to the first stamp but has a hologram and the position of the printers' imprint moved from the right hand edge to the left and shortened.
It's all so much more interesting than spending vast amounts of money on ridiculous stamps depicting cartoon characters featured in foreign comics. 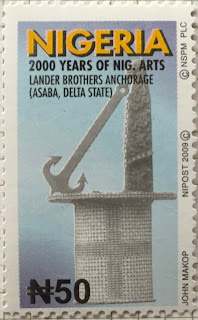 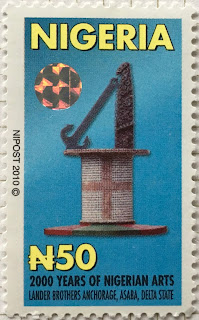 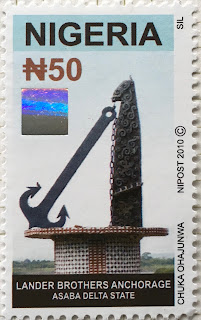 🇳🇦 In Blog 1411 I mentioned the set of 6 stamps issued by NamPost, the postal service of Namibia, which was issued on 19 March 2019 on the subject of Whales. This is an excellent set. NamPost retains its place at the very peak of stamp issuing entities for the excellence of its stamp designs, the quality of its stamp production and the relatively conservative new issue policy it follows. Rating:- ****** (6, yes six).

🇲🇲 Myanmar Posts will issue the fourth stamp in its delightful Myanmar Months series on 5 April 2019. The stamp depicts the month of Tagu and features the symbols of the Water Festival in the form of the padauk and kantgaw flowers. This is proving to be a highly interesting and attractive series. Rating:- *****.

🇱🇰 Sri Lanka Post issued a single stamp on 28 March 2019 to commemorate the 25th anniversary of the death of Dr Cyril Ponnamperuma (1932 - 1994) who was a notable Sri Lankan scientist in the fields of chemical evolution and the origin of life. Another interesting issue. Rating:- ***. 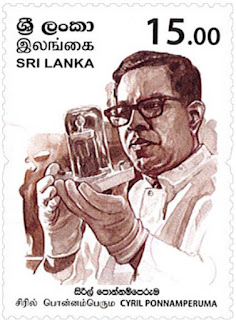