🇸🇱 You have to acknowledge that Stamperija - or rather those behind it - is/are rather clever. No matter how much you despise it, some of its products at least are very tempting to those too weak to resist and at times I find myself feeling sorely tempted.
Take, for instance, its latest products which have the name of Sierra Leone inscribed on them and are on the subject of the lesser flamingo and which, in all honesty, are rather attractively designed stamps. Said to have been "issued" on 30 May 2017, the entire collection is made up of a miniature sheet of 8 stamps (2 x 4), a sheetlet of 16 stamps (4 x 4), a miniature sheet of 4 stamps and the whole lot also issued in imperforate format. The big question is, regardless of how attractive they are, how many of them have found their way to being put on sale at ordinary post office counters in Sierra Leone? They are attractive but look at their pedigree, therefore rating is 0. 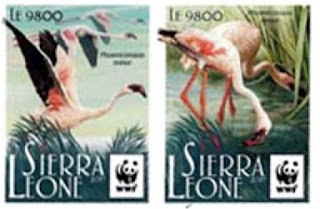 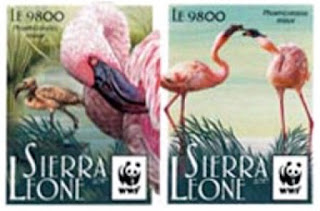 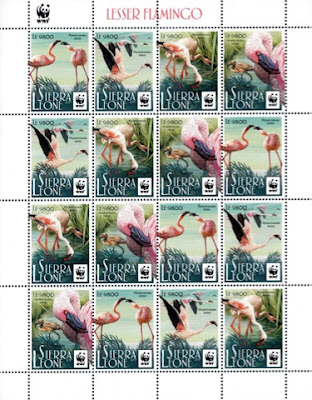 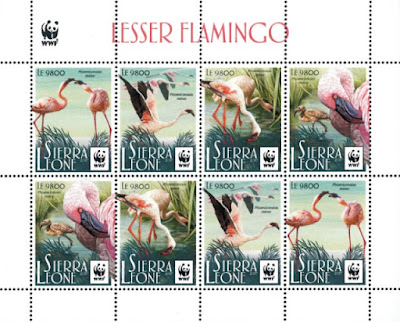 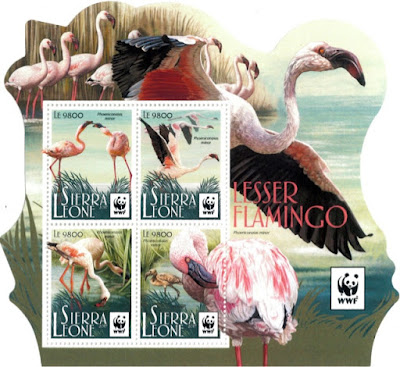 🇬🇧 There are a large number of new Royal Mail Post and Go issues be released in the near future by The Postal Museum which will move from its current location in Freeling House to Phoenix Place on 13 July 2017. Kiosk A001 will not be in use from 13 to 24 July and then on the 25 July exclusive access to the kiosk will be made to collectors so that they can buy labels with an official opening inscription.
All Post and Go label designs will have a new "The Postal Museum" inscription applied to them from 25 July and the formerly used "envelope" marque will not be included in the new inscription.
The new inscription will be applied to :-
A. The Machin Head 50th anniversary labels which exist of course in 6 colours (1st Class value only),
B. The Underground railway labels in 6 different values,
C. The Mail coach labels in 6 different values,
D. Machin Head (old design) (2 x 2nd class only - standard and large),
E. Union Jack in 6 different values.

Two types of "Opening" inscriptions will be applied to the labels:-

The Postal Museum will be closed on 26 and 27 July and then opened fully on 28 July onwards.

It is worth noting that the Machin Head 50th Anniversary labels with Postal Museum inscriptions (with "envelope" marque) were only introduced on 5 June 2017 and that they will therefore have a short lifespan of less than 2 months.

Therefore from 5 June to 25 July 2017 The Postal Museum will have had Kiosk A001 dispensing 32 labels and when the new inscription stamps are released without the "Opening" inscription this number will increase to 57 which seems rather a lot to me.