1022. 🇷🇼 Rwandan New Issues Finally Listed By Gibbons But Not In Part 1. 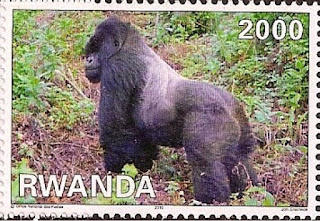 🇷🇼 Rwanda was admitted to membership of The Commonwealth on 29 November 2009 and since then has only issued 2 sets of stamps - a set of 4 depicting gorillas released on 15 November 2010 and a set of 5 issued on 15 October 2010. Prior to those issues a set had been issued on 1 January 2003 on the subject of the Fight against AIDS and as far as I know these are the only 3 issues from Rwanda to be released during the 21st century.
These stamps, along with a set issued in 1999 on the subject of the Rwandan genocide, have finally been listed by the Stanley Gibbons Catalogue editor in the Catalogue supplement published in the July 2017 edition of Gibbons Stamp Monthly. But the two most recently issued sets which were released after Rwanda became a Commonwealth member have not been included in what is still called the "British Commonwealth" section of the listings but languish in the "Foreign" section. This approach to the listing of the stamp issues of a new Commonwealth member contrasts with what happened after Cameroon and Mozambique joined The Commonwealth - all stamps released by those countries subsequent to their joining of the organisation were listed in the "British Commonwealth" section.
This is probably an editorial oversight and probably will be corrected if only for the sake of consistency. Not that it really matters as the Rwandan postal service seems to have all but given up the issue of postage stamps. However it's worth noting that there have been very many bogus "stamps" produced and sold on the internet in recent years and collectors should not be gulled into buying such worthless, fraudulent rubbish.
I rather expected that the Rwandan postal service would issue a set of stamps to commemorate the country's independence 50th anniversary which occurred in 2012 - an important national anniversary but, as far as I can see, never marked by a stamp issue. 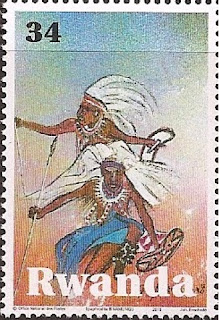 🇪🇷 The latest Catalogue supplement also brings up to date its listing of issues from Eritrea which was under British administration for some years though never joined The Commonwealth because it was incorporated in a Federation with Ethiopia. The new additions date back to 2013 but no illustrations of the listed stamps are included in the supplement.
The listed issues are:- 27 May 2013 - 20th anniversary of Eritrea-China diplomatic relations- 8 stamps (see Blog 783).
27 June 2013 - Gelalo - 8 stamps (see Blog 783).
10 February 2015 - 25th anniversary of the Battle of Massawa - 3 stamps
2016 - 25th anniversary of the liberation of Eritrea - 2 stamps. (See Blog 783). No mention of the accompanying miniature sheet Is made. (See Blog 862). 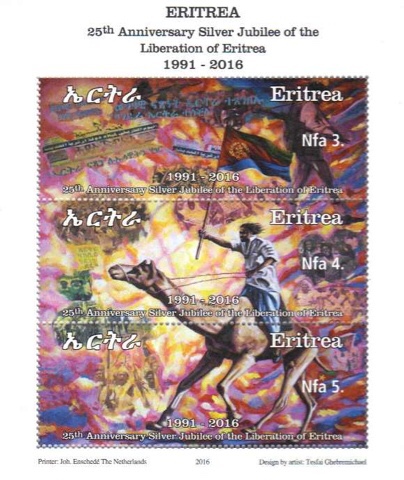