1005. 7 Year Wait For Lesotho Stamps Comes To An End; New Stamps From Cayman But Who Would Know? 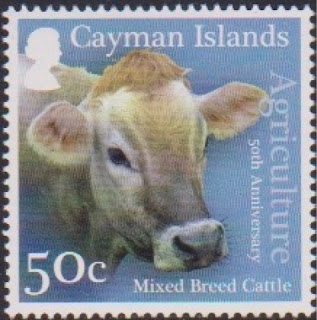 🇰🇾 The Cayman Islands postal service has issued 4 excellent stamps and 1 miniature sheet containing 3 different stamps on the subject of local agriculture. The issue was released "towards the end of March 2017" - I found this on a local Cayman Islands news site but have not yet found any philatelic site which mentions these attractive and interesting stamps - notably not on a CASCO site (CASCO being the philatelic agents for Cayman Islands) which currently seems to be non-existent. The merger of its parent company, Harry Allen, with Benham which took place at the end of 2016 seems to have resulted in a chaotic situation - my new issue supplier tells me that a number of stamp issues of CASCO client countries are awaited but the merger seems to have thrown things into a state of disorder so that he is still awaiting delivery of these stamps.
It's now 6 months since Benham and Harry Allen got together and CASCO still does not appear to have a working website to impart information about new issues to collectors and dealers. It all seems pretty pathetic to me and if I were responsible for a postal administration's stamp issues and hoping to actually sell some, I think I'd be looking for a new agent who would help me bring my stamps to the collecting world's attention.
However, I do like these stamps. Rating:- *****. 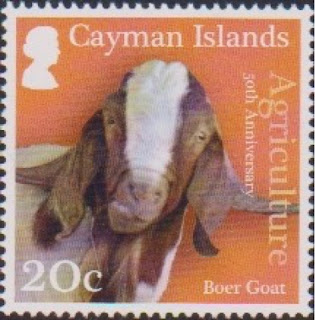 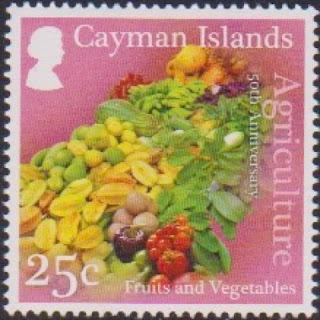 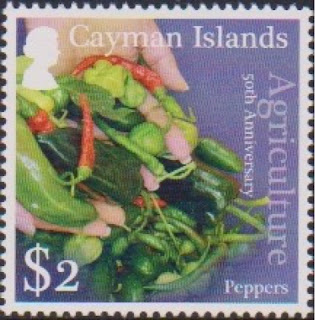 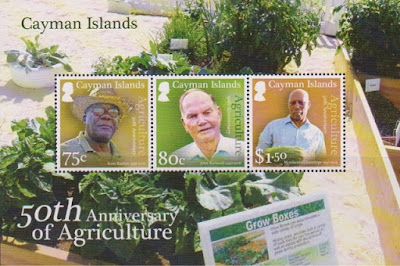 🇱🇸 Having not, as far as is known, issued any new stamps since 2010, Lesotho Post did apparently issue 2 new sets during 2016. My supplier of new issues from the Commonwealth southern African countries who appears on Delcampe as "15dsouth" and who gives an excellent new issue service, has kindly sent me scans of the 2 issues which apparently commemorated "World Post Day 2016" (a set of 6 stamps) and the 50th anniversary of the granting of Independence to Lesotho (a set of 3 stamps). I had been wondering for a while whether Lesotho Post would issue stamps to commemorate the country's momentous 50th birthday and those musings now seem to have been correct. These look like pleasingly straightforward stamps of local interest and probably designed locally and not products of foreign philatelic agencies and so I give both issues ratings of *****.
Unfortunately 15dsouth tells me that these items have not yet been made available to dealers so collectors will have to bide their time before placing these stamps awaited for 8 years in their collections. 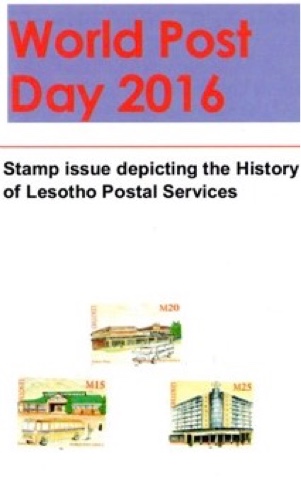 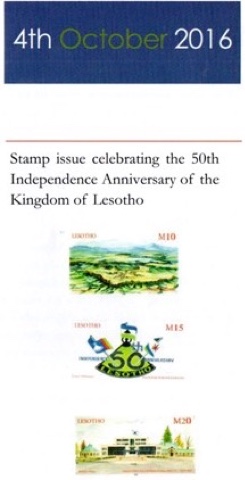 🇸🇬 Singapore Post issued 1 miniature sheet on 28 March 2017 to commemorate the Melbourne 2017 Stamp and Coin Show. This is a colourful souvenir of the exhibition. Rating:- *****. 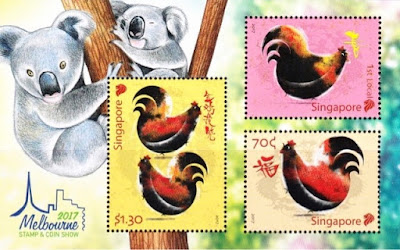