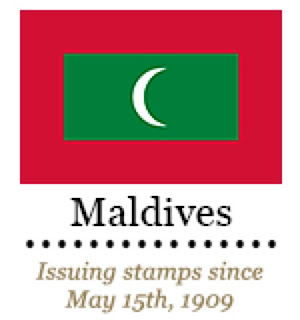 🇲🇻 In Blogs 947 and 948 I highlighted the decision by WOPA to offer the stamps of "Maldives" on its website. There was much annoyance about this decision among collectors and subsequently WOPA suspended its sales pending a review. This decision was explained by Glendon Martinez, MD and co-founder of WOPA, in the Comment section of Blog 947 and greeted favourably by most collectors.
This suspension of sales was pretty short-lived as it is perfectly easy to buy stamps inscribed
"Maldives" through the WOPA website again though the process is slightly furtive. If one visits the WOPA homepage Maldives is not shown as one of the territories being offered on the site but if the potential buyer clicks on the small subheading "Stamps" then Maldives does indeed appear among the list of countries whose stamps are being offered for sale and indeed even more stamps have been added to the list including new issues of 2017. It's rather like buying issues inscribed "Maldives" by going through a back door. The number of issues now being offered for sale are :-
2015:- 5 issues
2016:- 104 issues (!)
2017:- 30 issues.
One or two of the issues probably originate locally (2015 "50 Years of Independence" issue and 2016 "Handicraft of Maldives" sheet which is depicted below) but it is clear that the rest are typical products originating from Stamperija, the Lithuania-based Philatelic agency which is much despised by many new issue collectors for its extraordinary degree of overissuing of expensive philatelic items
which usually are irrelevant in subject matter to the client postal administrations whose names are
printed on such items.
The link from WOPA to these issues takes the buyer to a list of issues where the page is simply titled "Maldives" but if one visits the Maldives Post site a list of philatelic items is to be found with the Maldives Post logo at the top of the page though this page has not been updated since 2016 and in any case features the same sort of issues as the site accessible from WOPA. 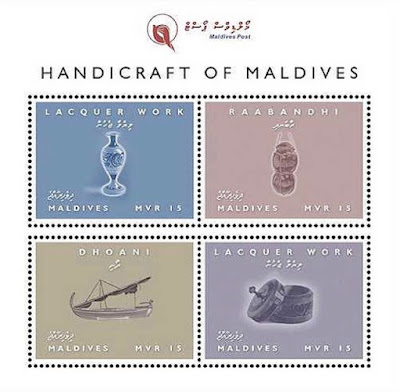 So, we may conclude that after a short "review" WOPA decided that "Maldives" stamps should once more be offered through its website though I have not seen any explanation being offered as to how WOPA arrived at that decision and secondly, for the present at least, WOPA is being discrete about its connections to the sale of these stamp issues by not depicting Maldives' logo on its home page unlike all the other countries which it lists. Collectors may need to wear a dirty raincoat and shuffle furtively through a dark back entrance to buy these "Maldives" stamps!
At least Maldives is no longer a member of The Commonwealth so really I don't have to worry about adding its stamps to my Commonwealth collection but one fears that it may not be too long before the stamps of Solomon Islands or Sierra Leone find their way on to WOPA's site.
Meanwhile this week's products from Stamperija do not have the names of Commonwealth countries printed on them being inscribed Tchad, Central African Republic and Guines so we are spared having to write about any of those this time.

🇿🇦 The South African Post Office issued 5 se-tenant self-adhesive stamps in sheets of 10 (2 strips of 5) on 18 May 2017 on the subject of "South African Bee-eaters". This is an exceptionally attractive and beautifully designed set. Rating:- *****. 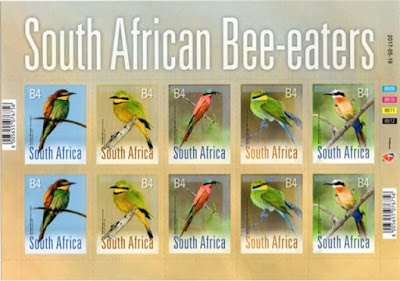 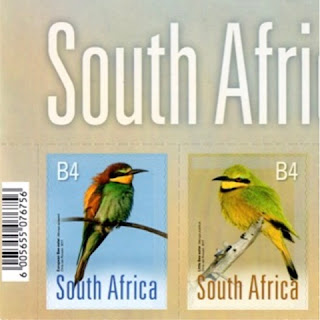 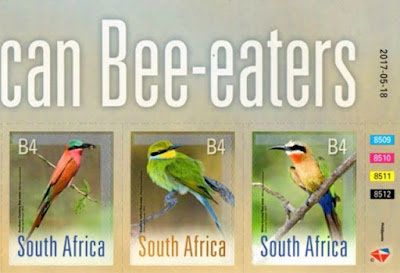 🇬🇬 Guernsey Post philatelic bureau tweeted on 18 May 2017 that its Post and Go kiosk GG01 located in Smith Street post office had that day dispensed its "Lighthouses" stamps with an additional inscription to welcome the passengers of the cruise ship Queen Elizabeth into port.

🇬🇧 The latest (June) edition of Gibbons Stamp Monthly is particularly interesting with a good deal of text dealing with the 50th anniversary of the issue of the first Machin Head definitives by the British Post Office along with the vexed subject of whether or not the recently issued £5 stamp which commemorates the 65th anniversary of the accession of Queen Elizabeth II should be accorded a place in the main listing of the Stanley Gibbons Catalogue given that it was put on sale at only 27 post offices throughout the entire United Kingdom.
The Catalogue editor has come down firmly on the side of giving the stamp full listing. In his discussion of the subject he puts forward the view that the limited sites of issue is due to the Post Office choosing not to handle the stamps in its various branches rather than to any fault on the part of Royal Mail which produced the stamp, they being two completely separate businesses.
The editor also makes the point that the widely held view that a stamp catalogue editor can influence stamp issuing policy is actually false. I'm sure he is right about this if one thinks about his direct influence on issuing. However the editor certainly will influence collectors in their decision making about whether or not to buy a particular stamp. If the editor does not list a certain stamp then collectors are far less likely to feel a pressure put upon them to buy such a stamp and therefore a stamp-issuing authority's profits fall because of reduced sales and they are far less likely to issue such a stamp again. Hence the editor may indeed influence a country's stamp issuing policy indirectly and thus influence the new issue market by a roundabout route.
At the end of all this, at any rate, the new £5 stamp has been given full catalogue listing though I suspect the reason why this is so is given by the editor's comment, "...bearing in mind that the vast majority of collectors will expect the new £5 to be listed the decision is an easy one. It will be found on the page facing this article". 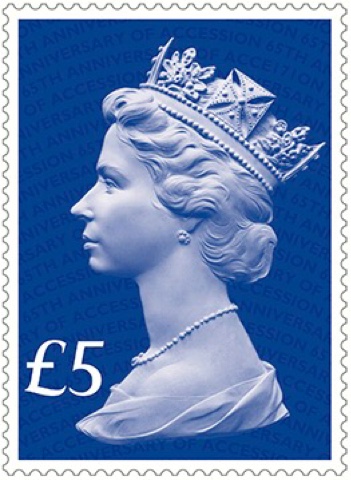